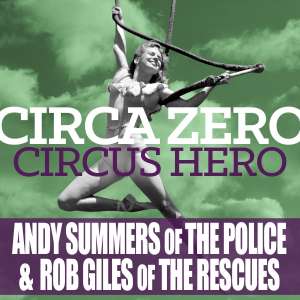 Circus Hero by Circa Zero. Buy it now at Amazon.

I had Circa Zero‘s debut album Circus Hero pinned as one of my most-anticipated music releases for 2014. As a lifelong fan of The Police, how could I not be excited by this band, and the first rock-oriented album from Andy Summers since his 1987 solo release XYZ?

I confess I was not at all familiar with Rob Giles before news of Circa Zero came out last year, nor his previous band The Rescues. I can also say that after multiple listens to Circus Hero, I’m not sure I’ll go out of my way to check out those previous releases, either. While Summers’ guitar work shines here and there are some wonderful, immediately catchy musical hooks, overall the album just feels a little bland and unoriginal—a work without a clear identity of its own. There is nothing so unique and compelling here as to become an instant classic to this listener, nor even to rank up with some of the classic rock greats it so strongly seems to be emulating.

Circus Hero opens with “Levitation”, a song which premiered on-line several months ago. At that time I’d been a little concerned by how much the song seemed derivative of The Police’s style. Of course I expected Circus Zero to sound somewhat like The Police, given how much Andy created and was responsible for that sound himself! But I had hoped for some more originality—certainly not a drummer trying to play so much like Stewart Copeland, riffs that echoed the reggae-rock/soft-loud dynamics so prevalent in especially early Police songs.  That said, “Levitation” did grow on me after repeated listens and left me hopeful for the rest of the album.

The Police elements are certainly there throughout, especially on “Say Goodnight” and the lovely “Whenever You Hear the Rain”, a gorgeous power ballad that recalls “Every Breath You Take” (but isn’t nearly as creepy and unsettling). Other tracks such as “Gamma Ray” and “Night Time Travelers” remind me of 80s Rush, “Underwater” a bit of U2, and “Shoot Out The Stars” almost sounds as if it could be a new Foo Fighters song. That is to say, most songs here keep reminding me of something I’ve heard before, by someone else, even when I can’t quite place when and where.

And there is a comfort in all of that familiarity, at least for this Cranky Old Dinosaur of a classic rock fan. These are all the elements of rock music I should love…but I can’t get quite beyond liking them on Circus Hero. Part of the issue for me is Rob Giles’ singing doesn’t really do it for me, at least not on the harder/louder songs where I find myself wincing at some of his screechy pitchiness (some reviews have compared him to Bono, which may be part of my problem—I’ve never liked Bono’s vocal style at all.) He doesn’t enunciate clearly when singing, or maybe it’s a production issue; I couldn’t understand most of the lyrics to “Say Goodnight” and “Shoot Out the Stars” until listening to the bonus acoustic versions. Most of those lyrics, too, don’t really speak to me on a deep emotional level and sometimes are downright cringe-worthy (“Hot as Rwanda, or young Jane Fonda” from “Gamma Ray”…ouch.)

What does keep me listening to the album is most certainly Andy’s guitar work. Anyone who has followed his post-Police years will hear how much his sound has continued to evolve, and it’s wonderful hearing that applied to rock music again. His solos here are complex and unexpected, the atmospheres as lush as anything he ever recorded with The Police or his instrumental albums Golden Wire and Charming Snakes. I discover new elements in his playing here on every listen…I just wish I could say the same about other aspects of Circa Zero’s music.

Overall? It’s Circus Hero is a good listen, but I wish it were a great one. I am of course hopeful that they will do some live performances as I feel some of the songs that are a bit flat on the album could really shine live.