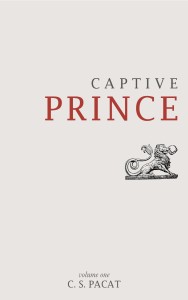 Captive Prince: Volume 1. Available in eBook and paperback at Amazon.

Fantasy, Political Intrigue and Simmering Sexual Tension: A Recipe For a Delicious Read?

In the kingdom of Akielos, Prince Damen is a hero to his people. He is the rightful heir to the throne, but he is not without his enemies—including his own half-brother. Damen is one day betrayed by his kin, captured and sent off to the enemy kingdom of Vere as his punishment, as a way to get rid of him more cruel than even assassination or imprisonment.

In Vere, Damen is stripped of his identity and humiliated, forced to become a pleasure slave to the seemingly cold, cruel and manipulative Prince Laurent. Damen rebels against this fate and tries to maintain his honor, but he must do what he can to survive, including keeping his true identity a secret from his new master.

While plotting of some day escaping and reclaiming his throne, Damen becomes caught up in the political schemes and machinations within the Veretian court.  Damen and Laurent may end up needing each other more than either would care to admit, in order for both of them to survive and save their respective kingdoms.

“Is there anyone at this court who isn’t my enemy?”
“Not if I can help it,” Laurent said.

“The Captive Prince” Series has been on my “to read” list for some time, given the avid following I know it has within many circles of m/m fiction fandom and enthusiasts. The first two volumes of the story were originally published in serialized format on the author’s LiveJournal account, then self-published before being picked up by Penguin books. However, after finishing Volume One I’m not really sure what the fuss is all about, except that it plays well into the trope of forced sexual slavery (which is quite popular as an “AU” in many slash fiction fandoms.) From a technical standpoint, yes, I found the book quite well-written. It is rich with lush detail and intricate world-building, which should appeal to those who enjoy losing themselves in a unique fantasy universe.

The Veretian palace, afroth with ornament, paid only lip service to defense. The parapets were purposeless curving decorative spires. The slippery domes that he skirted would be a nightmare in an attack, hiding one part of the roof from the other.

But more than that, I simply didn’t connect all that well with Damen as a main character. I didn’t dislike him, but I found myself much more interested in Laurent and wanting more of his story, not the other way around. I guess that’s just my thing for anti-heroes and complicated “villains”, as compared to straight-up heroic types which is more the role that Damen fits into. I imagine we find out more about Laurent in the other two books in this series, but I’m just not certain I’m compelled enough by this first book to want to read them.

Perhaps it’s also just that I’m not that much into this sub-genre of erotic/romance fiction to begin with. I don’t mind characters having a power imbalance but “slave-fic” doesn’t generally do it for me; it’s more uncomfortable-making than titillating. I was hoping that “Captive Prince”, given how often it is held up as one of the best works in the genre, would show me what I was missing and help me understand the appeal better. Sadly I was still left somewhat scratching my head.

Additionally if you are reading this book waiting for Damen and Laurent to “get together”, you’ll be disappointed. By the (abrupt) end of Volume 1  they are only beginning to get past their initial hatred of each other and build a cautious trust. So it’s not really a satisfying m/m “romance” unless you’re willing to commit to the entire three volumes of the book, I suppose? I don’t mind a slow burn, but the author has to get me to care more about the characters first if I’m going to commit that much time into a series and its central relationship.

“Order whatever punishment you like, from the coward’s distance of a chain-length. You and Govart are two of a kind.”

I should also note that “The Captive Prince” does contain many elements and scenes which some readers could find quite disturbing, repulsive, and potentially triggering. Damen is nearly raped at one point in a public fight scene staged for court members, and later brutally lashed in punishment. One of the other pleasure slaves who appears in the novel is an extremely young teenage boy, and although there are no explicit scenes involving him I know some readers have found this deeply uncomfortable and enough to put down the book completely. Even if we are supposedly in a fantasy/alternative reality world, it may be too disturbing an element of this world for some. Beyond all of this is the issue of sexual slavery itself, and whether that is a subject you are at all comfortable seeing portrayed in a manner not meant to be completely horrific and unacceptable (Damen himself had slaves in Akielos and does not see slavery itself as problematic, only the way slaves are treated in Vere and being forced into such submission as a man of his standing and background.)

All in all, I was left unsatisfied by “The Captive Prince: Volume 1”. While I could appreciate the quality of the language and elements of the story intrigued me, it simply did not give me what I’m looking for when reading m/m or fantasy romance. This book series seems like a love-it-or-hate-it kind of read, depending on your particular tastes in erotic-laced fiction.