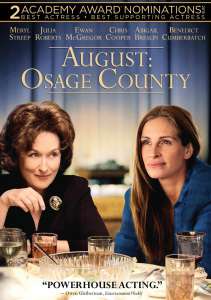 August:Osage County is a drama film that is set in the plains of northern Oklahoma in the hot month of August. It has been billed as a black comedy/drama, although I personally did not see it that way. The film does have some elements of black humor, but for the most part, it is an intense, character driven drama.

The main reason why I wanted to see August: Osage County was because Meryl Streep is in the starring role.  She’s been a favorite of mine ever since she appeared in Sophie’s Choice. Many people consider her to be one of the best actors of all time. She certainly is versatile and can play any character convincingly.

Her role here as matriarch Violet Weston may have been one of her most challenging. Simply put, Violet is one of the most unlikable female characters in a movie since Elizabeth Taylor played Martha a few decades ago in Whose Afraid of Virginia Woolf? I couldn’t find anything in Violet’s character to make her even a bit sympathetic.  That’s how bad she is, and why I think it’s easy to compare Violet to Martha.

Meryl is barely recognizable at times, playing a woman with cancer who also  has a serious pill addiction.She has bottles of meds all over the house, and can’t function without them.Violet chain smokes, even though she has cancer of the mouth. When she complains about a burning pain in her mouth, her daughter asks if she is supposed to be smoking. “Is anyone supposed to smoke”? Violet asks sarcastically.

Julia Roberts plays her daughter Barbara. The other two daughters are played by Julianne Nicholson (Ivy) and Juliette Lewis (Karen).

The scene that got the most buzz by far is the one with the family at the dinner table. Violet had been at the table for some time before she even realized someone was sitting there that she had not met. It was Karen’s fiance.

The story begins with Bev (Sam Shepard) hiring a live in cook and companion named Johnna (Misty Upham) to help his ailing, but acid tongued wife.Old photographs in the home seem to indicate there had been happier times for the Weston family.

Misty is a soft spoken, gentle young woman, the antithesis of Violet.Misty goes about her job with a quiet dignity and minds her own business. I tried to imagine myself in Misty’s position, and honestly couldn’t see lasting a day in that home.

Shortly after Johnna’s arrival, Bev disappears. The family is summoned to the home to support Violet while they search for Bev.

I have never really thought of Julia Roberts as a serious dramatic actress, but she’s very impressive as Barbara. It is obvious from the beginning that Barbara harbors a lot of anger and resentment at her mother, although it mostly simmers below the surface while the search is on for Bev.Things totally change at the dinner table following the funeral. That is when all hell breaks loose. Violet takes turns humiliating and berating her family until Barbara finally unleashes her fury. It definitely was an Oscar worthy performance by Roberts.

The scene is a searing portrayal of pent up anger and resentment.  I almost felt like I was intruding on someone’s private pain and bitterness, as Barbara can’t take it any more, and literally pounces on Violet.  That’s how effective the actors are. It’s not easy to watch.

The other cast members are equally good. This is what makes it very watchable. If this movie had been made with a cast of unknowns, I’m not sure I would have been interested in it. While some of it may have seemed over the top, there likely are some families out there similar to the Westons. Hopefully not too many though!

August: Osage County is not for everyone. If you like Meryl Streep you will probably agree her status as an acting legend is well deserved. Julia Roberts fans will be very impressed with how convincing she was in the role of Barbara.