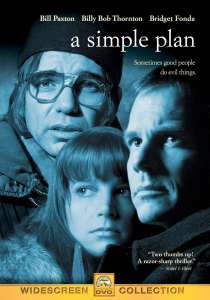 A Simple Plan is a haunting, suspenseful story that you won’t forget.  It stayed with me for quite awhile after seeing it for the first time.  Subsequent viewings have not diminished the suspense. It builds slowly at first, but as the main characters lives start to  unravel, you are on the edge of your seat waiting to see what is going to happen next. There is also a strong sense of foreboding. Somehow you just know this isn’t going to end well.

The plot is very straightforward. Hank (Bill Paxton), his brother Jacob (Billy Bob Thornton) and Jacob’s buddy Lou (Brent Briscoe) are out in the woods one winter day when they come across a crashed airplane. Inside the plane is a corpse. They also find a bag with a lot of cash. It contains almost 4 and a half million in unmarked bills.

Hank is one of the most well respected members in his small town. His first reaction is to turn the money into the authorities. Jacob and Lou have other ideas. The men surmise that it is drug money, and therefore no one is about to report it missing. Hank is persuaded, but only on the condition that he keeps the money in his home for safekeeping. They will wait until spring and if no one has reported the missing money, they will divide it between the three of them. It sounds like a simple plan. What could possibly go wrong?

Well, things could go very wrong, and they do. Although the men had agreed to keep it a secret, Hank informs his wife the same day.Sarah (Bridget Fonda) is desperate to escape their dreary existence in their sleepy town. Sarah immediately starts thinking about what they can do with the money.She behaves as though they just discovered they have the winning lottery ticket.

Jacob and Lou also renege on their agreement , and want the cash sooner rather than later. The dark, bleak winter landscape makes a perfect backdrop to the story.  The trailer, featured below, gives the viewer a good idea of what they can expect watching this film.

As you watch the story unfold, it’s almost impossible not to wonder what you would do in a similar situation. This is one of the reasons why it is so compelling to watch.  The fact that the pillar of the community keeps the money shows that even the best of us can do things that would otherwise be unthinkable in certain circumstances. That is the point of this film I think; ordinary people become overwhelmed with greed and soon have their lives turned upside down due to the terrible decisions they make. 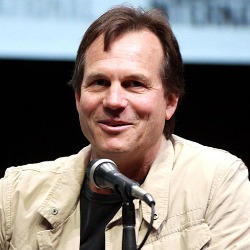 Bill Paxton and Bridget Fonda are excellent as the ordinary couple who get caught up in a web of lies, decent, and dreadful crime. Billy Bob Thornton, as the simpleton Jacob, actually has a stronger sense of right and wrong than his highly regarded brother.

There are a few scenes of violence, but the real suspense is the decent into moral corruption involving the main characters, and Hank and Sarah in particular. A Simple Plan is a top notch thriller with an unexpected (for me at least) twist at the end.