Recently I had the opportunity to see Hush, Hush, Sweet Charlotte again.  I could not tell you how many times I’ve watched this movie, but it’s probably no less than ten. Over the years I have never lost my interest in this story. It’s one of my favorites from the 60s. 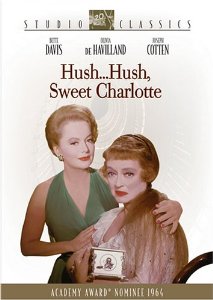 Hush, Hush, Sweet Charlotte has everything you could want in a film. It is a mix of  drama and suspense, with a certain amount of camp too. The black and white cinematography and haunting, eerie music add to the suspense factor. There is even a huge thunderstorm late at night,a staple for suspense stories,complete with howling winds and shattered glass.

What really makes this film such a treat is the performances by the cast. Both Bette Davis and Agnes Moorehead are over the top at times, but that only makes it more fun to watch.

This wasn’t the first time that Davis had played a very disturbed, and somewhat grotesque character.   In 1962 she appeared in Whatever Happened to Baby Jane? with Joan Crawford.  The movie was a box office success, and producers were eager to have them both appear in another story.  Davis was given the script for the new film, and readily came on board.

It wasn’t much of a secret that Davis and Crawford  despised each other, on screen and off. Crawford did not want to work with her again. Producers were faced with the difficult challenge of finding someone else  to play Charlotte’s cousin Miriam. Many major stars had been approached, but they all  turned the down the role.

Bette Davis had a good relationship with Olivia de Havilland  and recommended her for the part. Olivia at the time was known for playing kindhearted characters, and may have been apprehensive about taking on the role of Miriam. However, she was eventually persuaded, and I think we can all agree she played her part to the hilt.

Similarities Between Baby Jane and Charlotte

Baby Jane and Charlotte had some characteristics in common.  They were friendless and  almost totally unaware of the outside world. They also lived  completely in the past. As time went on, both characters had difficulty knowing fantasy from reality. Both women had fiery tempers as well.

However, there was one major difference that I could see. Charlotte was a much more sympathetic character.  It’s impossible to not feel sorry for her as she descends further into madness.  She also was betrayed by two people she thought she could trust.

You also get the sense that her life was stolen from her. Charlotte Hollis was shunned by almost everyone, because the town believed she killed her lover. Charlotte, meanwhile, thought her father was the culprit. The only person who really cared about her was the wisecracking housekeeper.  Charlotte wouldn’t move out of the dilapidated mansion because she could not let go of the past.

It’s quite a mystery to me as to why de Havilland did not receive a single award nomination for this role. Agnes Moorehead was nominated for an Oscar and Golden Globe, although she did not win. Not to take anything away from Moorehead, but de Havilland most definitely was overlooked for some reason.

Initially the character of Miriam seems so sweet and innocent. However, it doesn’t take long for the viewer to realize her true character is far from that. The scene between Velma and Miriam, where Velma confronts her, is acting excellence. Her voice is cold and menacing. But what really gets me every time is the pure look of evil and hatred on Miriam’s face as Velma reveals what she knows.

The other scene that really displays her acting talent is the car scene. Charlotte is near hysteria. Miriam stops the car, slaps Charlotte repeatedly and threatens her in such a way that would scare anyone. She’s very impressive and convincing as an evil character.

Hush, Hush, Sweet Charlotte is great entertainment and perhaps one of the most memorable roles ever played by Bette Davis. Mary Astor and Cecil Kellaway were good in small but important roles. I wasn’t too fond of Joseph Cotton’s portrayal of Drew.The southern accent seemed to be a bit too exaggerated, plus he often sounded like he was drunk.

The theme song is great too, which is sung as a lullaby.Patti Page made it a great hit.