The Beginning of the Davis/Evans Collaboration

Historically, one of the oddities about the Birth of the Cool is that the music gathered in one place was not released until 1957. After Miles had Secured his big deal with Columbia, in the jazz world Miles was the next big thing, so Capitol decided to capitalize on that success. 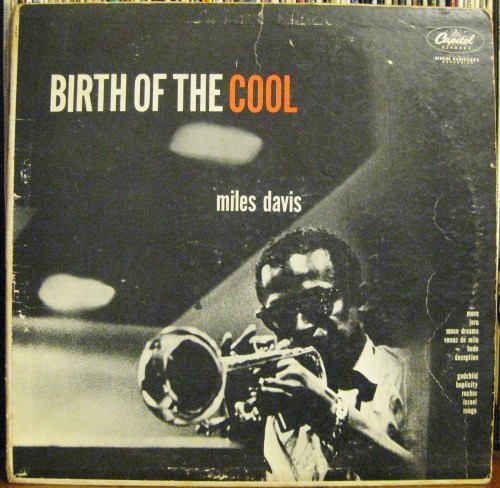 These sessions were already 7-8 years old in 1957, originally recorded in 1949 and 1950. Ponder for a moment where Miles would be just 8 years after 1957? He would be on the verge of 3 unbelievable second great quintet years, reinventing himself yet again.

I can plainly hear the music in 1959’s Kind of Blue as well, Kind of Blue actually taking what The Birth of the Cool did in simplifying the music, and freeing up the improviser to solo over modes and not chords. “Birth” was a welcome lyrical alternative to the maddeningly complex chord changes of bop.

Miles and Gil were personal friends

Miles sure did have an ear: He had a way of bringing you inside his world musically. I wish Miles would have done more with Gil Evans, or at least experimented with larger bands more. His best album of the 80’s was Aura in my opinion, other than the Quincy Jones Montreux collaboration, the Aura band was the largest band he worked with after Gil.

Let’s understand something about the Birth of the Cool band, Gil Evans seems to be the main organizer behind The Birth of the Cool. The key participators were in fact meeting regularly in Gil’s basement apartment for some time to woodshed. Miles in particular shared a friendship with Gil that was not only professional, but also personal.

This friendship lasted until Gil’s death in 1988. Gil was 14 years older than Miles, I think he was sort of a Musical father figure to Miles. Gil had actually wanted Charlie Parker to be a part of these sessions, but as it turned out, Bird was not available.

If you wanted to break away from bop, why would Parker ever be considered? As it turned out, when Parker was out, Miles pretty much rose up and took over the band and the project.

Players like baritone saxophonist Gerry Mulligan, drummer Max Roach, Pianist John Lewis, and saxophonist Lee Konitz were important to the music, if not equal to Miles in its development. All of these men mentioned above went on to have incredible jazz careers in their own right, expanding the jazz tradition, and in Miles’ case, smashing it to smithereens.

I would have to give equal billing to Mulligan, Miles, and Gil Evans, all 3 contributed compositions, arrangements, and ideas. According to the reissue CD liner notes, somehow Miles was able to secure a recording deal with Capitol Records, it was well-known that the executives were not into modern jazz, and were basically only interested in Sinatra and swing bands.

Personally I enjoy Stan Kenton who was a Capitol artist, he was pretty progressive for a so-called swing band, but he had vocalists like June Christy with him to allow for some sort of commercial marketability.

The thing that is amazing to me: Miles was 22 years old, without a reputation at all, and he was able to secure a recording contract for the band, maybe a sign of things to come?

Miles obviously must have displayed some sort of magnetism that the execs couldn’t resist, for them to be willing to take a risk with such a project they ordinarily would have run from? Perhaps it was just the youthful exuberance of a new artist with the potential to be great that aroused the chance taking side of the Capitol executives?

Move: Move is an interesting up beat tune, with a nice alto solo, the track reminds of some of the Clifford Brown stuff that came a few years later. I like the Baritone sax and tuba bottom end contrasting the saxophones.

Jeru: Jeru is a quintessential west coast jazz tune, Mulligan was great at these melodies that seemed perfect for a game show or variety show. the horns seem to have this paired quality, they play in unison to emphasize the melodies.

Moon Dreams: “Moon Dreams” is a brooding ballad, that is irresistible in how it draws you in to the almost depressive quality of it, The music lightens up a bit, then the spiral to hell ending.

Moon Dreams is a track you really need to experience to understand it. I believe Bernard Hermann was influenced by “Moon Dreams” for his Main theme for the film Taxi Driver.

Budo: “Budo” is the first Miles Davis composition to make its way into the compilation. Not unlike some of the early 50’s stuff Miles Did, brisk paced, and some nice better than average playing by miles himself. Mulligan almost gets lost in the mix though. his baritone was so light that he can fade into the background sometimes

Deception: “Deception” sounds like some of the later Prestige stuff Miles Did, yet the odd horn pairings in the background make the music seem much more complex than it really is.

Godchild: George Wallington was a fine bop pianist who worked with Dizzy Gillespie, and had a 50’s band with Donal Byrd on trumpet, his main claim to fame is “God Child” and the standard “Lemon Drop”

Boplicity: “Boplicity” is one of the better known tracks from the sessions, co written by Gil Evans, easily in the top 10 of the greatest Miles composition. this is the track that reminds me the most of what was to come with Miles and Gil on Miles Ahead.

Rocker: Another fine light dancing number from Mulligan, he is the king of softer “but not bland” jazz. not exactly a rocker in the rock n roll sense, that’s for sure. Then again rock n’ roll wasn’t not even invented yet.

Israel: “Israel” is one of my personal favorites from The Birth of the Cool, I love the Lee Konitz Alto playing on this one. John Carisi is a forgotten man in jazz, he was a trumpeter in the Glen Miller orchestra, then after WWII he played with Claude Thornhill among others. Not only did he compose Israel, he also composed “Springsville”, it showed up on Davis’ Miles Ahead , the Gil Evans Arranged Masterpiece.

Rouge: Pianist John Lewis, who would go on to form the Modern Jazz Quartet with Milt Jackson on vibes, he offers possibly the most up beat and quite “bubbly” tune of the sessions

Darn That Dream: I have to be honest, I am not a big fan of this track, I find the vocals of Kenny Hagood to be completely forgettable, the music behind him is of the highest quality, but simply not my cup of tea. In fact “Darn that Dream wasn’t even released on the 1957 Capitol Records compilation, it was only included on the complete version from 1971.

Complete Birth of the Cool Sessions

This Complete Sessions set is probably the way to go, you get the studio tracks from 1949 and 1950, in the best remastered sound you’re likely to ever hear.

Then you get the September 1948 Radio Broadcasts from the Royal Roost, consider this: These recordings will be 65 years old in September 2013.

I realize that this music has been dissected by smarter people than myself. I can’t help but hear all the music Miles ever played up through In A silent Way in this session as a direct descendant to these sessions.  As I mentioned above, modal jazz and post bop, a logical evolution from The Birth of the Cool in my mind.