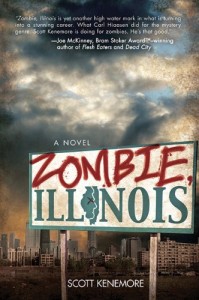 Zombie, Illinois by Scott Kenemore. Buy it now at Amazon.

The zombie apocalypse has come to America. In fact, it seems to have originated somewhere here in the mid-west, near one of the largest cities in the United States: Chicago.

The undead are rising from the city’s graveyards, morgues, and even Lake Michigan itself, where many bodies have been dumped through the years to hopefully be forgotten.

But when Al Capone himself rises from the grave and eats the city’s current mayor, it’s clear there’s no escaping from Chicago’s troubled and tumultuous past.

In fact, it just might take an army of the undead to finally clean up the corruption in this town.

“The interesting thing about cities isn’t what they do when people are looking,” Ben says. “It’s what they do when they think nobody’s looking. Like, the s–t the city is proud of? The shining skyscrapers downtown, the sports stadiums, the public art? You can’t judge a city by that. That only tells you what the rich people are doing on a good day. It’s what people do on a bad day—a bad day when there are no security cameras watching—that tells you what you really want to know. It’s how people act during a blackout, a hurricane, or a siege that tells you the truth about a city.”

Zombie, Illinois tells the story of the first day of the undead uprising from the viewpoints of three unlikely heroes. Ben Bennington is a political reporter always on the lookout for a good story—and the best free food and drink at any given PR event. Leopold Mack is a pastor from the South Side of Chicago, a man who reinvented himself from his troubled past to try to make a difference in his poor community. Maria Ramirez is the drummer in a punk rock band, a tough young woman obsessed with Stewart Copeland and ready to take on any marauding zombies with a pair of drumsticks to the eyeballs. A series of coincidences throw these three together as they struggle not just to survive but to uncover a city-wide conspiracy of corruption.

I confess that there was one primary reason why I chose to buy and download this book: how could I resist a novel where one of the main characters shares my love for Stewart Copeland? And is a female drummer to boot? That alone was enough to get me interested, and make me want to read Zombie, Illinois despite the fact that I am not, generally, into zombie apocalypse fiction.

It’s true; I’ve tried to get into The Walking Dead and it doesn’t do anything for me. I tend to find zombie fiction too bleak and depressing for my tastes; as a sub-genre of apocalypse horror/science fiction, it’s generally not my thing. But I was willing to give this novel a chance for what seemed like a more satirical, light-hearted (if that’s possible) take on the subject, and to a certain extent it did deliver.

Because the three main characters of Zombie, Illinois are good characters. Maria is a strong woman but with a heart and her weaknesses as well. She’s been through a lot but will continue to go through a lot to try to get to her mother and her family in this crisis—and her “deadbeat dad” may be more important to events than anyone thinks at first. Ben is rather a bumbling everyman, a reporter who knows all about the shady dealings of Chicago politics but is probably the least heroic, naturally, of the three. He’s got a bit of a crush on Maria but romance definitely needs to take a back seat when zombies are around every dark corner ready to eat your brains.  Leopold Mack actually ended up being my favorite of the three protagonists, a complicated man who served in Vietnam, got hooked on drugs and crime when he got home, and eventually came to God and wanted to help his community.

Mack’s story and his interactions with his parishonners on the South Side  of Chicago were some of my favorite parts of the story; Kennemore does a great job of showing how a community can come together under one strong leader to defend themselves. And having spent quite a few years living in a “transitional” neighborhood in Philadelphia, a lot of this part of the story rang very true and believable (yes, for a zombie apocalypse story) to me. I also enjoyed the exploration of Mack’s faith and the questions he struggles with, in seeing how God could put humanity through such horrors as he is witnessing now.

Kennemore also does know the city of Chicago inside and out. The geographical details really ground the story in the city and make it unique to its environment. But at the same time, the author’s obsession with Chicago politics also makes Zombie, Illinois a bit dull to an outsider at times, and makes it seem too much of a political statement as compared to a real horror-thriller. There’s a bit too much info-dumping about corruption in the city; a little too much jumping back and forth between tense zombie confrontations and tedious political machinations. I struggled to get through parts of the book only to then have the action pick up to breathtaking, hard-to-put-down passages.

I also had a few other quibbles with the book that made it hard for me to enjoy and fully recommend. For one, the author make a few too many cheap fat jokes that are completely unnecessary. (Ha ha, a morbidly obese woman turns into a morbidly obese zombie that nearly crushes one of our protagonists. How funny. Not really.) Early on we learn that Mack has a “deep dark secret” that he’s hiding from everyone, and when it’s finally revealed it ends up being a real let down, another cheap joke that in my opinion falls flat.

The book also needed some professional grammatical editing; there are frequent dialog punctuation errors throughout, which is one of my hugest pet peeves as a writer and reader. There also seemed to be some formatting problems with my ebook version, with several chapters oddly duplicated.

Zombie, Illinois is actually the second book in a trilogy by author Scott Kenemore, preceded by Zombie, Ohio and followed by Zombie, Indiana. However each book follows a separate protagonist/set of protagonists so they can easily be read as a stand alone novels, as you choose. I’m not certain I’ll be in any rush to read those other titles, personally, as I’m still not that crazy about zombie stories. But if it’s a genre that you personally enjoy (and aren’t completely sick of these days with it’s over-saturation in the marketplace), then you might want to give Zombie, Illinois a chance.