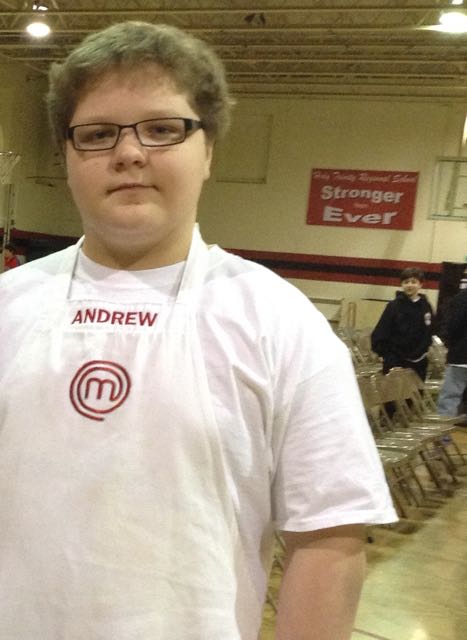 While I haven’t been doing weekly recaps of MasterChef Junior Season 3 as I have in the past, I’ve still been avidly watching the series this season. In fact, I think this has been my favorite edition of MasterChef Junior overall as there was such a great bunch of kids this time around—including one young chef from my own area, Andrew Zappley of West Deptford, New Jersey.

Andrew, only 11 years old when the show was filmed, has become quite a local hero to not just his classmates but everyone in the area who has been following the news. It’s been exciting to watch his progress all the way to the final battle, which aired last night on FOX. Every week his local school, Holy Trinity Regional in Westville, has hosted a viewing party where friends and neighbors could watch the show with Andrew and his family. Last night I finally made it to one of the viewing parties myself as I wanted to be there with our community, whether Andrew won or loss—and have a chance to hopefully meet Andrew himself.

Doors were open at the school by 7pm and Andrew’s mother Karen was there to greet arrivers, asking all where we were from and thanking us for coming out to support her son. When I mentioned I was a local food blogger and avid fan of MasterChef (so much so that I even went to several casting calls myself), we ended up talking for a while about what the experience had been like for Andrew. She then called him over to say hello and pose for a couple photos for me.

I must say that Andrew is very quiet and rather shy in person, compared to the impression you might have had of him on the show. He’s a serious kid, too, and you have to remind yourself when you meet him that he was only 11 years old and in the 6th grade when MasterChef Junior was filmed. He and his family have had to sit on the secret of who actually won the competition for eight months. His mother told me of how you definitely can’t believe everything you see on screen about these kids’ personalities, as if you had any doubt about what “reality television” is like compared to actual “reality”. Getting on the show in the first place is a lot more about personality (and psychological testing) than anything else, and the experience of taking part in a competition like MasterChef can really make or break a person. 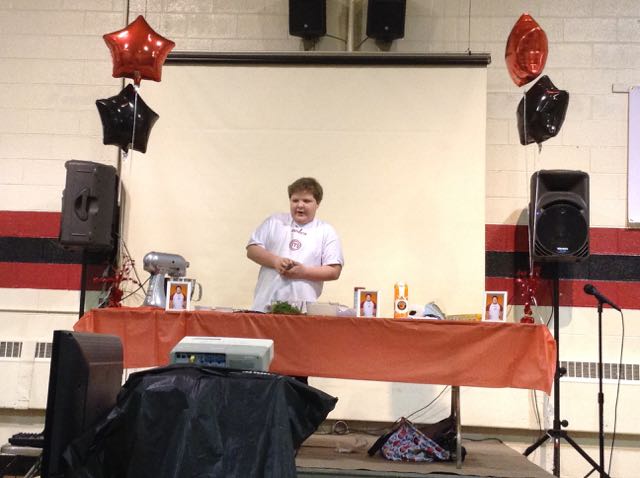 The gymnasium began to fill up pretty quickly as the night’s festivities began with a cooking demonstration by Andrew. He showed everyone how to prepare crostini with freshly-made herb butter and sun-dried tomatoes (yes, this kid was making butter from scratch.) I was impressed just watching his very professional knife skills at work, even on a wobbly folding gym table. When he was finished  with the demo, several trays of the crostini were brought out from the kitchen for everyone to enjoy. There were also hot dogs, cupcakes, cookies and bottled water free to all attendees, and as 8pm drew near the place was just about packed; it easily looked like 150-200 people were there, including many young children and adults alike in “Team Andrew” t-shirts.

As the show began, Andrew took a seat in the front row of folding chairs. Among his peers and family, you could see Andrew light up with excitement and energy at getting to share this final MasterChef adventure with them. He was animated and encouraged on the crowd who cheered and clapped loudly, some even raising “Team Andrew” signs as, on the projection screen, he entered the MasterChef kitchen to face off against Nathan.

The crowd at Holy Trinity Regional cheers on Andrew during the MasterChef finale battle.

This being the final battle, the two young chefs had 90 minutes to prepare a “stunning” 3-course meal for the judges. Finale battles of MasterChef are generally not my favorite parts of the show as they become so predictable to watch after so many seasons: Both chefs come close to or possibly make some “fatal mistake” in the cooking. The appetizer round will clearly be won by one of the two; the entree by the other. It will appear to come down to who wows the judges the most in the dessert round. Every season it seems to be the same, like clockwork.

But this finale battle actually seemed much closer and hard to call than usual. Nathan and Andrew’s menus could not have been more different: Nathan went for artistic, fussy, modern French while Andrew went for earthy, rustic and bold Italian. Andrew seemed to win the appetizer round for sure with his made-from-scratch ricotta seasoned with mint and cilantro, served with roasted beets and pumpernickel bread croutons. Nathan’s fennel tart was underdone but the judges seemed to like his raw fennel and grapefruit salad quite a bit.

In the entree round, Andrew may have made his “fatal mistake” by under-cooking the beef cheeks for his ravioli. But only Gordon commented on that fact in what we saw on screen during the tasting; Joe and Graham both seemed to quite like his ravioli with their professional appearance and perfect pasta dough. Nathan made an almost standard MasterChef finale entree of rack of lamb, but maybe it’s such a standard choice because the judges go crazy every time someone manages to “nail” the cook on it.

But even as things seemed to look bad for Andrew before a commercial break, he stood up to tell everyone “Just wait for dessert!”

For dessert, Nathan made a tart with Earl Grey Tea which was very artistic in appearance—but personally wouldn’t have been something I’d ever order off a restaurant menu. Andrew made an intriguing sweet risotto “rice pudding” with figs and cinnamon which may not have been as “pretty” on the plate but sure looked delicious to me. The judges all seemed to agree.

So, who would be announced as the winner? I have to admit that by this point of the night, with all of the build-up and excitement in the room, my heart was pounding as the announcement approached. Everyone in the room seemed confident it had to be Andrew! And for the one and only time the entire night, the gymnasium fell silent in that final few seconds before the judges made their announcement…but then shock and dismay soon followed:

No one in the audience could believe Nathan was the winner. No offense to Nathan, as he’s clearly a nice kid and talented chef in his own right, but Andrew’s our “local boy” and everyone thought he deserved to win the title. (I’ve had a sinking feeling throughout the last few episodes that Nathan would win it, however, the way the editing of the show kept emphasizing how his family could “use the money” and “didn’t have much”. We know the MasterChef behind-the-scenes editors love a good sob-story ending every season…) And even though he wasn’t the winner, the entire crowd got to their feet to give Andrew a much-deserved standing ovation.

After the noise and uproar died down a bit, Andrew took to the stage to thank everyone for all of their support, and then his father presented him with his “own” MasterChef trophy, even if it wasn’t the official one.

Andrew was also presented with framed mementos of his time on the show by his school, and congratulated for becoming such a hero to the younger students who all looked up to him now, excited to have such a “celebrity” here at their own school. 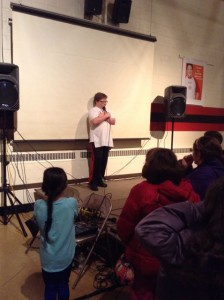 Andrew takes questions from the crowd.

Andrew then stayed on the stage to take questions, many of which came from the eager young children seated in front of him wanting to ask about what his entire experience had been like. When asked if he received any money or other prize being the runner up, he said no. The only prize money goes to the one who wins the title.

As far as what it was like “working with” the judges Gordon, Joe, and Graham, he made it pretty clear that the kids really didn’t work with the judges much at all—they were there and it was intimidating when they’d be hovering over the young chefs during the cooking competitions, but it wasn’t as if they were receiving mentoring or real guidance from Gordon, Joe or Graham. That said, Andrew is eager to check out Gordon Ramsay’s new restaurant in Atlantic City soon (Gordon Ramsay Pub and Grill), and he is still in touch with Gordon’s daughter Matilda!

Would he consider or be interested in writing a cookbook for kids someday? He might, he said, although he wasn’t sure how many kids would really be interested in eating the kinds of food he’d like to write about.

Did it bother him seeing so many rude and negative comments about himself online (being called a bully, insulted for his appearance, etc) and he just completely shrugged it off. In fact, he made a great comment about people who had nothing better to do than spend their entire day making comments on the MasterChef Junior Facebook page:

Now that is New Jersey for you!

I asked if we might be seeing any of Andrew’s signature dishes soon on the menus of South Jersey’s many Italian restaurants, and he said that was definitely a possibility.  His mother confirmed the same to me before the end of the night, that she had been contacted by several places in the area interested in doing some special events with Andrew. I would certainly look forward to seeing that happen (and honestly, a lot of the Italian restaurants around here could use some of Andrew’s finesse and talents.)

Because win or lose MasterChef, it’s clear that Andrew Zappley has a great future ahead of him in the food and cooking world. He’s a winner to everyone here in South Jersey, and a wonderful role model for other young children who aren’t afraid of dreaming big and following their passions.

Team Andrew all the way!