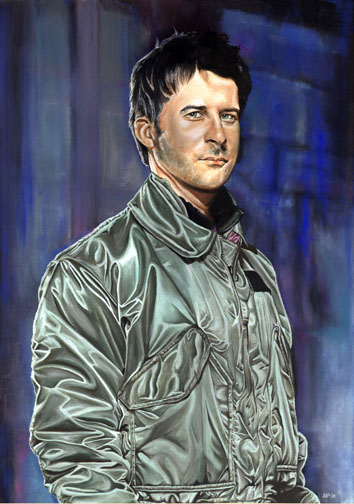 Fan art has been a part of fandom communities for decades. From “Star Trek” and “Star Wars” to “Twilight” and “Harry Potter”, fans of television series, movies, books, music and anime – or even of a media genre as a whole – have been creating pieces of art based on their favorite heroes and heroines for years.

Fan art can come in many different styles and mediums, from traditional portrait drawings and illustrations to digitally photoshopped works of art. It is a medium of expression as varied and creative as “original” art, filled with wonderfully talented individuals.

This page will present a brief introduction to the world of fan art: traditional uses and methods of sharing, current places to find fan art on-line, as well as a brief discussion of some of the legal questions that can surround producing fan art.

All fan art used on this page for illustrative purposes was created by the author, sockii.

Science Fiction and Media Fandom Has Valued Artists for Decades

Wikipedia defines fan art as “artwork that is based on a character, costume, item, or story that was created by someone other than the artist.” (Fan Art, Wikipedia) Originally, fan art was used as a term to designate the work of an artist who was not necessarily professionally employed or pursuing a career in a field of genre arts, but simply created work based on topics of which he or she was a “fan”. This type of fan art was most typically found in genres such as fantasy and science fiction, which were having conventions and other kinds of small gatherings, along with amateur magazines called “fanzines”, where fan art could be shared with other enthusiasts.

Fan art became increasingly popular in the 1970s as media fandom began to break away from traditional science fiction fandom, and Star Trek fans in particular began holding their own conventions and producing their own fan works – including fanzines. These fanzines included news, letters of comment and original fan fiction, and they needed artwork and illustrations to enhance their appearance and marketability to other fans. 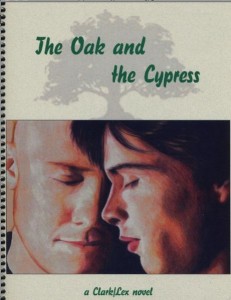 Cover of The Oak and the Cypress, a “Smallville” fanzine

As discussed in the fandom wiki Fan History, this early fan art was largely pen-and-ink based, simple line art because that was the easiest to reproduce before modern Xerox machines became readily available for consumer use. Color artwork was generally reserved for fanzine covers and special issues, as it required expensive color separation reproduction. Sometimes fanzine publishers would take advance payments for upcoming fanzines, to help cover the costs of producing better quality artwork reproductions. Many such fanzines from past decades are considered extremely collectible today for their artwork.

Conventions such as MediaWest*Con would host large art shows where fanzine publishers could buy original art they could use for their ‘zines. Other artists would directly submit art to fanzines, either as general pieces or specific story illustrations, in exchange for receiving a free copy of the final publication. Other fandoms besides “Star Trek” became increasingly popular including “Star Wars”, “Blake’s 7”, “Man From U.N.C.L.E.”, “Starsky & Hutch” and later “Quantum Leap”, “Forever Knight”, “Miami Vice”, “Highlander”, “The Sentinel” and “Stargate” to name just a few. All of these fandoms produced large amounts of fan art, as did other smaller fandoms.

As computer technology advanced even further and the internet began to play an important part in fandom, fanzines became less central to the fandom experience. Fan artists could share their work directly on-line through websites, forums and mailing lists instead of waiting to have it published in a fanzine or to display it at conventions. Those who did not have strong drawing skills could begin producing computerized fan art through programs such as Photoshop, manipulating photographs to create new images and illustrations of their favorite characters. Today, fan art exists in many different formats and is shared in all kinds of venues, although a limited market still exists for it in traditional fanzines still being produced (although they are increasingly few and far between.)

Deleted Scenes from the “Trekkies 2” Movie about Fandom

In this section on “Self Expression” from the film “Trekkies 2”, a number of Star Trek fans show their own fan art as well as look at fan art in display at a convention art show. Others also discuss another form of fan art they enjoy – Star Trek-themed tattoos! 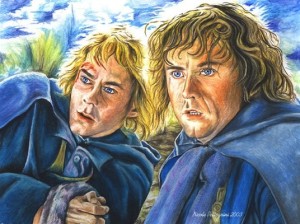 Fan art of Merry and Pippin from “The Lord of the Rings” trilogy.

The legalities of fan art are often debated within the fandom community, and not always easy to answer particularly from one country to the next because of varying copyright laws. If fan art is considered “derivative work”, then its copyright would belong to the original copyright holder for a particular character, property, movie universe or book and not the artist. The artist should not have the right, therefore, to display the work without permission of the original copyright holder, and certainly should not be allowed to sell it without first obtaining a license to do so.

However, many in fandom attempt to claim that fan art falls under fair use including “commentary, criticism, news reporting, research, teaching, library archiving and scholarship.” Others consider fan art a transformative work which “takes something extant and turns it into something with a new purpose, sensibility, or mode of expression” therefore suitable of legal protection in its own right.

In general, most media copyright holders turn a reasonable “blind eye” to fan art activity as it can be seen, to an extent, as a form of “free advertising” for their products. Artists are able to display their works in on-line archives and websites providing they are not profiting from the work (archive maintainers themselves may use advertising or other ways of supporting their site through donations, providing they are simply covering their hosting costs). Fan artists continue to sell their original paintings and drawings at fan-run conventions, although many larger, commercially-run conventions do not allow fan art in their art shows unless the artist can provide proof of licensing rights.

The sale of prints can be more questionable, even through it continues as well through many small fan-run art shows today. Fan artists who sell prints often produce only very low print runs (less than 50 to 100 copies) and sell them at a low, fixed price in print shops at conventions. In Japan, doujinshi fan art and manga is frequently produced and sold in direct violation of Japanese copyright laws, yet is only very infrequently prosecuted because it is considered to have a productive impact on the greater manga market in the country.

Where I have personally seen fan artists face trouble has been when selling their art on mass-produced merchandise such as t-shirts, coffee mugs, mousepads and similar products – which has resulted in at least one Cease and desist letter of which I have heard. Some copyright holders have also objected in the past to more “adult themed” fan art being produced, particularly if the media in question was largely aimed toward a youthful audience.

Where to Find Fan Art On-Line

Galleries and Archives of Fan Art from Anime to Twilight

There are many on-line galleries and archives for fan art, often fandom specific or personal galleries for a single artist. Below are some of the biggest and best places on the web to find fan art in various popular fandoms, and also some of the largest multi-fandom archives to which most any artist can submit work.

Please do not assume that just because a work of fan art is based on another’s characters or subject matter it is therefore OK to steal that fan art for your own use. Do not copy or use a piece of fan art you like on your own webpages or otherwise without asking the artist’s permission first.

My Experiences and History with Fan Art 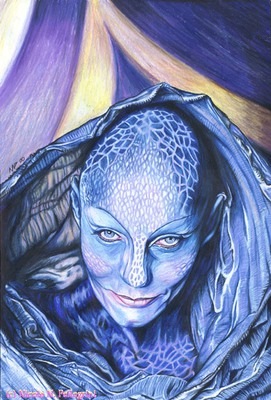 Portrait of Zotoh Zhaan from “Farscape” – one of my award-winning pieces of fan art.

In a way I began drawing and painting fan art since I first became interested in art as an early teenager. My old sketchbooks are filled with drawings of my favorite musicians at the time – Pink Floyd, The Police – as well as copies of album cover art. In high school, I even did some work painting album artwork copies on friends’ denim jackets, as was very popular in the 1980s. At the time I didn’t know this as “fan art”, it was just a fun way to enjoy drawing and painting about subject matter about which I was passionate.

During my graduate school years I discovered organized media fandom and began going to conventions like Shore Leave, MediaWest, and Eclecticon. I got into fanzines at the same time, including publishing my own and needing artwork to illustrate them. I started producing artwork about my favorite TV and film characters for ‘zines as well as to sell directly in convention art shows. I would often get a dealer’s table and try to cover my costs of going to the convention by selling prints of my fan art and collectible items I’d accumulated through the years.

After about ten years of doing this, I really wanted to get more serious about my art as I could feel my own limitations from being self-taught restrict what I could accomplish. I began taking drawing and painting classes through a local school’s continuing education program, where I became completely enamored with oil painting and classical painting techniques. I completed a few pieces of fan art using these techniques, but fandom really isn’t the market for classically realist oil paintings which take months to produce, and deserve to be sold for hundreds if not thousands of dollars (although, I will say, one or two top artists in the field of fan art have gotten such prices in past auctions for a very in-demand piece when the subject fandom was truly “hot”.) So I decided to switch my focus more toward original subject matter and old master reproduction work – which, I suppose, could be considered a type of fan art in its own way..

Thank you for reading my brief introduction to fan art. Please feel free to leave any questions, comments, or links to other good fan art archives and resources here.