September 1, 2013 | Posted in TRADITIONAL ART AND PAINTING | By No Problem

Walter Crane (1846-1915) was versatile and extremely prolific artist who is today best known by his cooperation with engraver and printer Edmund Evans (1826-1905) in the series of picture books. They were pioneers in color printing and children’s book design and we can say they were probably the most influential duo in the history of picture books. 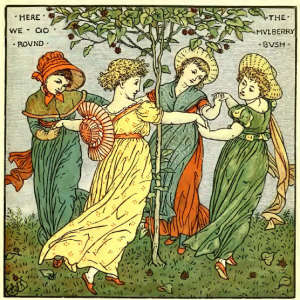 Walter’s grandfather was an editor and book seller, his father Thomas and three uncles were lithographers and Walter was (together with his siblings) invited to the world of art from the earliest age. His father’s studio and National Gallery in the neighborhood provided first influences to the young artist.

Walter Crane enjoyed in drawing animals and his first paid assignment (sometimes in the form of cookies and milk and sometimes in pocket change) were scenes from the animal life. His second big love was poetry. Walter illustrated several poems including the famous Lady of Shalott by Lord Tennyson. This oil painting was made when he was only 17 years old and it was exhibited at royal Academy. 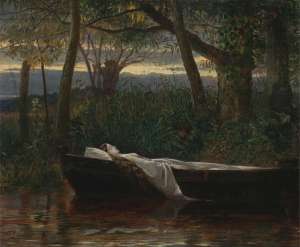 Young Crane’s talent was soon recognized by several artists, critics and craftsmen in his home Liverpool and later in London. Wood engraver William James Linton (1812-1897) took him as apprentice what gave Crane a chance to study already established masters together with the process of transformation of drawing to the final printed books.

After three years of apprenticeship he was capable to earn a living only from his artistic skills. Edmund Evans approached him with the idea of so called toy books. This picture books for kids were made in chromolitography technique which revolutionized the market of children’s books. There was no more need for hand painting, editions were larger, quality of print was better, costumers were willing to pay more.

First titles were still far from perfection (they didn’t use yellow color, for instance) but we can already see the mastery of an artist who was only twenty something years old. 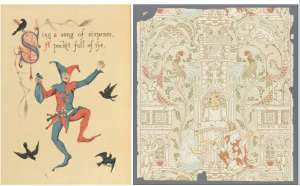 Evans and Crane produced about fifty picture books together and next cover from 1874 is great proof of their growing skils. We can see more details, more colors and more professionalism in general. 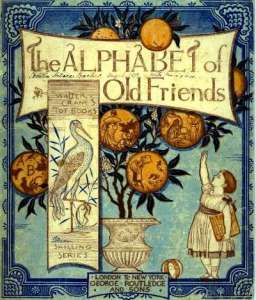 Crane was not working only for Evans. We should at least mention 16 books he illustrated for Mary Louisa Molesworth (1839-1921), who wrote stories for girls with strong moral messages, essentially to prepare girls for their roles of wives and mothers. Mrs. Molesworth is almost forgotten now but her work was very popular at the end of 19th century and it certainly contributed to Crane’s popularity. 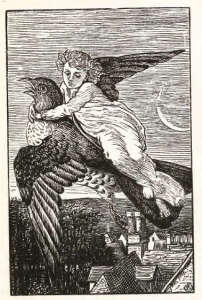 To see more of Crane’s illustrations for Mrs. Molesworth and to get better feel of those times, visit this address:

Walter Crane eventually stopped illustrating for kids and he was slowly withdrawing from the book market. His primary occupations were in the field of education, where he wrote several important books about drawing and design. He was also active in politics trying to implement ideas of socialism into art.

In Crane’s lifetime art was still considered as something noble, distinguished from everyday life and reserved for only a handful of chosen. Only painters, sculptors, poets and other ‘classical’ artists were appreciated as creative minds. Illustrators, engravers, tilers and others were on the other hand treated as ‘ordinary’ craftsmen. 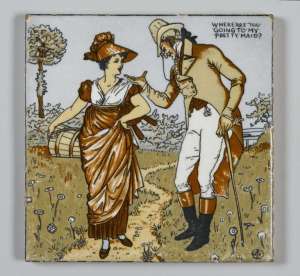 So Walter Crane spent the rest of his life fighting for the ideals he believed in, participating in several artistic organizations, illustrating Socialist pamphlets and making paintings in oil.

Let me conclude this little journey with a vignette from maybe the best Crane’s work for children, Fairy tales from Grimm brothers. They were made in black and white, but are still very attractive due great skill of the illustrator who managed to use small available space to maximum potential. 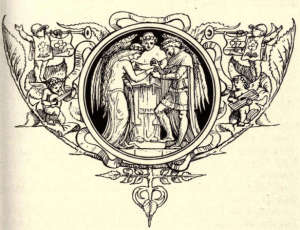 If you like the details on this particular illustration, there are many more on:

The illustrations of Grimms’ Fairy Tales are great example of the creativity which can’t be confined with space limitations. On contrary, rigid rules often encourage new and original approaches. It is obvious Walter Crane wasn’t afraid of challenges.