Kallax replaced the Expedit as the best record shelf 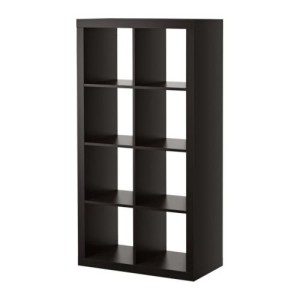 Back in February of 2014, when I learned about Ikea’s discontinuation of the Expedit shelf, it was a total shock. Expedit was probably the most well liked, and perhaps the most affordable vinyl record shelf on the market.

Since that announcement I was anxiously waiting for the Kallax shelf to hit the market. As the announced replacement, I had heard the shelf  would be less thick than what it was replacing.

I have been using those Expedit shelves for years, and only after trying several inferior products, I was lucky enough to run into them at an IKEA Superstore. Of course since then, they are well-known to me, I bought 8 of the four cube units for my own record collection.

The Kallax virtually looked identical to me as the Expedit, except for one difference, that mentioned thickness. The Kallax didn’t look quite as substantial to me, but the company said that the Kallax was just as sturdy as the previous shelf to bare the load of a heavy physical weight LP collection.

In the past year, I have heard zero complaints with the shelves sturdiness.

IKEA now does their part environmentally too:

Ikea also touts the smaller amount of wood being used as being more environmentally friendly. Right now Ikea’s wood supply is 25% compliant with the Forest Stewardship Council’s recommendation. Ikea reportedly hopes to increase that to 50% within 5 years.

I suppose every little adjustment helps the environment, but it had better be sturdy enough, no joking around with the weight of vinyl!

It is worth noting that this Kallax has many more color options available, like teal, pink, blue, red, and of course the chocolate-brown that I prefer that seem to go with anything.

In the past year I have thinned out my own record collection, selling off over 1,000 records, so I have plenty of extra cube space. You don’t have to store just vinyl records of course.

What People are Saying About the Kallax

I have heard many people say they would never buy an IKEA product again after this switch, “oh whatever”. What could possess people to be that loyal to a shelf of all things, especially if the new shelf is just as good, or even better?  I can’t tell much difference with the Kallax… The thickness of the wood yes, a slight difference. If you’re not mixing and matching the 2 styles, there won’t be an issue looks wise.

The Ikea Hackers site likes the Kallax well enough, they seem to have no issues with it for wall mounting for non vinyl record reasons, thought you can do it for vinyl too. They also give some practical tips on what to, and what not to do.

Another home decor blog has 5 clever ways to customize the Kallax shelves, they seem to be fine with it too. As a record collector, I sometimes forget, or take for granted the things you can do with these shelves… see below for more.

I use my left over Expedit for toys, cloths, can goods, utility stuff, the sky is the limit. You can also modify the Kallax with slide out baskets and closing doors.

Depending on the Kallax’s reception, the price of the Expedit shelves could rise exponentially, as the secondary selling opportunists squeeze every last ounce of selling potential out of the product.

Those who have grown to love their old friend the Expedit hopefully can learn to love the new shelf the same, only time will tell. Honestly, I don’t see any better options out there for the price at all, so it looks like the Kallax will have to fill the void for now.

Don’t limit yourself to IKEA of course, you owe it to yourself to check other options for LP storage. Perhaps an even cheaper option would be to your liking. There are more expensive options too of course.