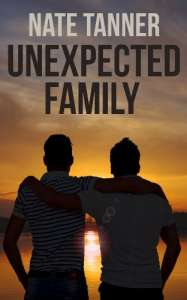 Unexpected Family by Nate Tanner. Buy it now at Amazon.

If you’re in the mood for a sweet romance about finding love when you’re not looking for it, Unexpected Family by Nate Tanner makes for an easy day’s read and just might fit the bill. It tells the story of two single dads in Minnesota who slowly move from friendship into romance, and how they struggle to come to terms with not just their own feelings but those of their two boys.

The story is told from Will’s point of view. He’s recently moved to the area after his divorce. He doesn’t like his job but he can’t afford to quit it; he’ll do whatever it takes to keep a roof over his son’s head, and he’s thankful to the charitable groups that helped him after his divorce—and to recover from his alcoholism. One early morning while running in the park, he meets Tom, a friendly native to the area about Will’s age. They set a plan to become running buddies and Will’s happy to have perhaps finally found a new friend. He’s hopeful maybe their kids can become friends, too, but it turns out that’s not going to be quite so easy: Will’s son Andy already knows Tom’s son Braden, and they hate each other. In fact, the two just got into a serious fight at school.

At first Will is embarrassed to run into Tom again, but eventually decides he needs to meet with him about their children’s problems, and see if they can set things right. The boys eventually get over their issues and become best buddies, yet at the same time their fathers argue over their different outlooks on life. With time they get over their own disagreements and begin to form a bond that goes beyond being single fathers. Tom admits to having cheated on his wife with a man; Will reveals (to the reader) his teenage sexual explorations with one of his male friends. The two slowly go from friendship to flirting to a full-on sexual affair, but struggle with how to let their boys know about it. Will Andy and Braden be able to accept their fathers’ relationship? And will the two men be able to work out their own difficulties and differences in how they parent their children?

That’s about the extent of the plot—and drama—in Unexpected Family, but it was enough to keep me engaged and reading through to the end. Nate Tanner’s style is easy to read and I was quickly engaged in Will’s first-person narration: his cautious early attraction to Tom, his frustrations and conflicts, his love for his child and wistfulness as the ten year old boy is getting older and no longer wants to be called pet names, or be read to at night. Will and Tom have some interesting debates over faith and religion: Tom is a non-believer for reasons which are revealed in the story; Will wants to believe but struggles to find real reason for his faith. The young boys, too, make for fun foils for each other and their parents. While sometimes they seem a little too precocious for 10 year olds, at other times their actions are quite believable, from temper tantrums to emotional outbursts and foolish decisions that make their fathers’ lives difficult.

This title is apparently a bit of an aberration for Nate Tanner, who writes primarily m/m erotica and not romance. There are only a few sexual encounters described here and they are not overly graphic, so I would recommend this book to readers who enjoy m/m fiction that is not so very explicit. I did have two criticisms, however, which is why Unexpected Family only gets 3 stars from me and not a higher rating. First, there were some obvious typos and punctuation errors which could have been easily caught by an editor; the book is self-published and I get the feeling Tanner probably rushed it out instead of giving it the proofreading it could have used. Secondly, there is only one (minor) female character in it who is positively portrayed. Both Will and Tom’s ex-wives are described in awful terms and while that might be true from the mens’ points-of-view, it gave me a bit of an icky misogynistic feeling at the end. It would have been nice, perhaps, to have the book be not quite so much of a total “sausage-fest” (a term Will even uses himself at one point).

Even so, I still give Unexpected Family an overall positive rating and would recommend it to those in the mood for a feel-good gay romance read.