From Marriage to Heartache, These Are the Late Singer/songwriter’s Best Songs About Love Lost and Found 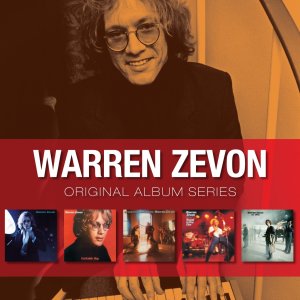 Although best known for his morbidly witty songs such as “Werewolves of London,” “Roland the Headless Thompson Gunner” and “Lawyers, Guns and Money,” Warren Zevon could at times prove himself a true romantic at heart. The late singer-songwriter penned love songs and ballads filled with heartbreaking honesty and emotion, and delivered them as only he could with his deep and unmistakable voice. For those unfamiliar with Warren’s work beyond the familiar hits, the following list of his Ten Most Romantic Songs, joyful, hopeful and sorrowful, should open up a new appreciation for his musical and lyrical genius.

This slow-rock number has a melancholy feel but still maintains a note of optimism. Although the narrator is still “searching for a heart,” he hasn’t given up hope, for he knows that “love conquers all/You can’t start it like a car/You can’t stop it with a gun.” Featured on 1991’s Mr. Bad Example album, the song actually shone best in Warren’s live performances, such as on his live album “Learning to Flinch.”

This sad song about love gone wrong features lovely guest vocals by Linda Ronstadt. Singing about the end of his marriage to wife Crystal, Warren wonders if he will ever find true love again but seems doubtful, for “No one will ever take the place of you.” Anyone who has ever had their heart broken yet still has feelings for their old flame will find much to relate to in this song. It can be heard on the 1980 album Bad Luck Streak in Dancing School.

3. “Tenderness on the Block”

This lighthearted number about young love likely owes its uncharacteristically sweet side to Jackson Browne’s co-writing touch. Featured on 1978’s Excitable Boy album, it may be one of the lesser-known tracks on this classic record. Yet it still is worth note for its affectionate words of advice to parents about letting their daughter go out to discover the world of love and romance.

Those looking for a little playfulness in their romance should enjoy this bawdy number from 2000’s Life’ll Kill Ya record. Warren’s lyrical puns and innuendo take religious themes and symbolism into altogether different territory. “I’ll take you home to meet the congregation/We’ll all get together in my tent,” Warren promises, but the naughtiness is all in good fun.

One of Warren’s most heart-wrenching songs, “Please Stay” was a centerpiece to his final album The Wind in 2003, recorded in the last months of his life. “Will you stay with me to the end/When there’s nothing left but you and me and the wind?” Zevon asks. Emmylou Harris provides lovely backing vocals to assist Zevon’s at times faltering voice.

This plaintive song from 1987’s Sentimental Hygiene album works on two levels: as both a love song asking for a second chance, and as a plea from Zevon himself, on releasing his first studio album in five years. “If it’s still the past that makes you doubt/Darlin’ that was then and this is now/Reconsider me.” In album notes at a later date, Warren remarked that in fact “She did–too late.”

This beautiful song from Life’ll Kill Ya speaks of the power of love through the years, and being with the one you love no matter what troubles are faced. It’s a somewhat haunting message now, given that only two years later Zevon would be diagnosed with terminal cancer.

In the liner notes to the I’ll Sleep When I’m Dead anthology, Zevon described this song, the title track of a 1995 album Mutineer, as a “gesture of appreciation and affection to my fans, none of whom bought the record.” Even so, this mellow song plays well as a tribute to a feisty spirit and the one (or ones) who stick with him no matter what. “You’re my witness/I’m your mutineer,” Zevon pledges.

9. “Let Nothing Come Between You”

This upbeat song from 1982’s The Envoy may be Warren Zevon’s cheeriest number ever. A somewhat silly tune about getting married, there is still that classic Zevon twist in how it seems those around the singer are not nearly as convinced as he that this wedding is a good idea. But still, Warren’s advice is that “When you find someone to have and hold/Don’t let nothing come between you.”

10. Never Too Late For Love

Perhaps Zevon’s most powerful, uplifting song ever is “Never Too Late For Love,” the last track from The Envoy. Encouraging the listener never to “stop believing in tomorrow,” the song is an emotional message of optimism and the triumph of love over despair and sorrow. Long-time Zevon collaborator Waddy Wachtel provides beautiful guitar solos that echo the soaring message of the song. “You say you’re tired/How I hate to hear you use that word/Everybody hurts,” Zevon tells us, in this song which is perhaps the best one ever for a person nursing a broken heart. Even if “the way is black,” there is always a better day ahead, he promises, and the right heart looking for love.

This article was originally published at Yahoo! Contributors Network on January 31, 2011.