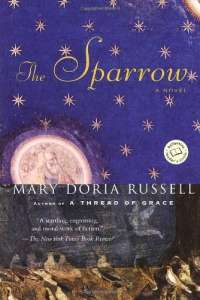 The Sparrow by Mary Doria Russell. Available in print and Kindle editions at Amazon.

Summary: Father Emilio Sandoz is the only survivor of a Jesuit-organized mission to the Alpha Centauri star system, where radio signals have been discovered broadcasting beautiful, alien music. Four priests and four civilians set out and find the planet Rahkat, but what happened to them there? How is it Emilio is the only one left when a second party sets out from Earth—and he’s discovered with his hands brutally mutilated and “surviving” as a prostitute, no less? These are the questions the Jesuits must answer as they begin an inquiry into the failed mission. But in Emilio’s fragile state, will he be able to stand the questions – and will they be prepared to hear his answers?

My review: This book had been on my reading list for some time, as I generally enjoy “First Contact” stories and was intrigued by the religious aspects of the story. I was able to accept the seeming implausibility of a private, Church-funded mission being the first to set out to explore a new world, given the church’s history doing just that on Earth. Indeed, as the Space Shuttle program is now retired and space exploration seemingly has taken such a backseat in the face of global issues, it almost seems more likely than a U.S, Chinese or otherwise-national mission at this point in time. Yet there are many other points of implausibility and “bad scifi” – along with just plain bad writing – in this book which I found ultimately frustrating and highly disappointing.

I can get past the point that, given the book was published in 1996, the technological advances that the author posits to have occurred by 2014 are a very long way off yet today. I have a harder time getting past some of the incredibly stupid decisions made by this party of explorers, however, that end up getting them into trouble for reasons that should not have happened—except to drive the plot along the way the author wants it to go. I also found the characters overall difficult to believe as “real people”. Their dialog doesn’t read like conversations normal people would have; the things that they all laugh about and are supposed to be oh-so-witty and clever just, well, aren’t. Most grating is the character of Anne, who the author flat out admits in the end notes is based on herself. Anne is a terrible Mary Sue of a character: everyone loves her, she always makes the right decisions, she match-makes, she’s a wonderful cook, she still has a “dancer’s body” at 60 (and yes, we’re even “treated” to a passage of her admiring her nude body in a mirror.) Anne is the worst of the bunch, but none of the other characters are much more believable or more than stereotypes.

I also have major problems with the ending, the “big reveal” of the horrors that happened to Emilio and the rest of the party which are difficult to get into without spoiling points that should not be spoiled for anyone who hasn’t read the book yet. (You can read my spoiler review of The Sparrow on Goodreads if you are curious.) Again, part of it involves people making very baffling assumptions that should have been as obvious to the characters as it is to the readers. There’s also an emphasis on wallowing in Emilio’s torture, abuse and angst that is somewhat baffling and disturbing – almost to the extent of a very bad piece of Whump fan-fiction.

Yet for some reason I was compelled to read The Sparrow all the way to the end, and to order a copy of the sequel, Children of God —just to find out how it would all get resolved. There were times when I was completely absorbed in The Sparrow despite its many flaws, and with the promise of learning more about the world of Rahkat (the best part of this book by far) and perhaps seeing if the author could do better the second time around. 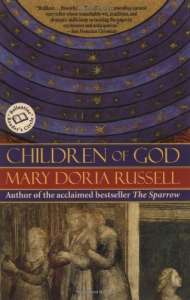 Children of God by Mary Doria Russell, available at Amazon.

Summary: Sequel to The Sparrow, published in 1999. Father Emilio Sandoz is just barely beginning to recover from the botched Jesuit mission to Alpha Centauri, now that the inquisition into what went wrong is over. The only known survivor of the mission, he returned to Earth crippled physically, spiritually and emotionally—yet the Jesuits are desperate for him to return to the planet of Rahkat and will ensure that he does return by any means necessary. What he’ll find when he returns is a world permanently changed by the actions of that first crew and mission, as descendants of those he once knew are now creating a new balance and society. But will he find a resolution to his own pain and questions of faith?

My review: I had very mixed feelings about The Sparrow, and feel similarly now that I’ve finished this sequel. In ways I definitely enjoyed this book more as it got right into the action (whereas I found The Sparrow horribly difficult to read for the first 100 pages or so.) More time is spent on Rahkat and exploring the cultures of the two alien species, the “gentle” Runa and the carnivorous Jana’ata who have for ages ruled the planet and kept the Runa under their control as servants—and food. The balance of the Runa and Jana’ata has been disturbed after the arrival of that first Jesuit mission, particularly as it turns out one of those humans believed dead actually survived and was left behind and now is working with the Runa to lead a revolt.

But there were still many frustrations I had with this book that kept me from truly enjoying it or wanting to recommend it wholly. The book jumps frustratingly around in time, with chapters devoted to the future at random intervals which are difficult to follow at best, and spoiling/ruining the dramatic tension at worst. Many new characters are introduced on Rahkat who are difficult to keep straight (even which ones are Runa and which ones are Jana’ata), given the alien names and speed with which they are dropped into the story. The crew members—besides Sandoz—on the new mission to Rahkat are a pretty unsavory bunch, difficult to care much about. And through it all, Sandoz suffers and angsts and suffers some more, being torn away from the happiness he was just beginning to find on Earth. Russell just seems to love to torture the poor guy in every way imaginable.

Beyond all of that, their are ethical and moral issues in the resolution of the book that I find difficult to accept. Without spoiling things too much, are we supposed to be pleased at how things end up on Rahkat, with one of the two species headed likely to extinction? Are we supposed to see the arrival of the Jesuits on Rahkat as a good thing, because it stirred the Runa to revolt even if it lead to widespread death and destruction, the complete changing of an alien planet’s culture and way of life? What right did the humans have, if any, to interfere in such a way (intentionally or not)? Why did they not spend more time studying Rahkat from afar, trying to understand their world before initiating that first contact so clumsily? To me this all show’s Russell’s lack of experience and understanding of the science fiction genre.

I suppose at the end of the day, I’m glad I read both of these books, and I’m glad I read this sequel to “The Sparrow” to complete the story. But, I don’t think I’ll be in a big rush to read any other books by this author any time soon.