Artists quickly learn that they need to develop a thick skin in order to make it in their chosen field. Teachers and mentors—at least the good ones—will give their students honest, if sometimes brutal, feedback on their artwork. Critics can be merciless…and the general public even more so.

I learned this lesson very quickly as I first began showing my artwork publicly, approximately twenty years ago. And while I have no argument with the need for honest, genuine feedback meant in a constructive manner, I do have a problem with those who like to demean others’ work just for their own sick sense of satisfaction. This behavior was something I experienced at one of the very first showings of my work, and the incident still sticks out in my mind as the single rudest thing that I have ever experienced as an artist. That it happened at the same time I was getting my first taste of a helpful, critical review by a professional in the field only makes it stand out more so in my mind today. 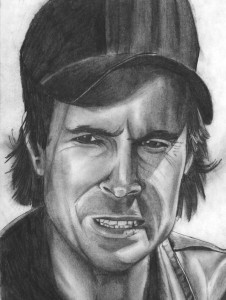 One of my early pieces of fan art, a pencil drawing of Dwight Schultz as “Howling Mad” Murdock from The A-Team. This was one of the pieces I exhibited at that first MediaWest art show I attended.

This first exhibit of my work was not in a fancy gallery, nor even at a school student show. I was, at the time, primarily self-taught as an artist. I had loved painting and drawing since I was a child, but had chosen to pursue an education in the hard sciences instead. However, as I emerged from college I began seeking out artistic pursuits once more, and made some of my first efforts in the field through the art shows at media and science fiction conventions. I was quite a fan of popular scifi series of the time such as Babylon 5 and Star Trek, as well as older action/adventure shows such as The A-Team which still had fandoms active at some conventions.

Art shows are a popular part of many media conventions, as fans enjoy purchasing character portraits and other works produced by fans celebrating their favorite shows. MediaWest in Lansing, Michigan (a convention I have previously written about here) was only perhaps the second convention I had ever attended. In 1995, it was also the first convention I was going to show my artwork at, having reserved a panel to exhibit about ten pieces. As with most convention art shows, there was no jury at MediaWest to restrict or choose who could or couldn’t show their work. Provided one paid a modest hanging fee, your work could be displayed and potentially sold to anyone else in attendance.

It was an exciting prospect to me, as I worked for several months deciding on what pieces to bring, finished some new ones just for the show, and tried to figure out how to display them. I had been doing media character portraits for some time, either for my own amusement or to use as illustrations for the fanzines I was producing at the time. In retrospect now, if I look at those early works I can see them as rather amateurish compared to the art I am doing today after many years of training and practice. However, I was quite proud of them at the time, and had received complements of the quality of the work when printed in fanzines. Therefore I had hopes they would be well-received at the convention. I might even go home with some money in my pocket, I thought, excited at the prospect of trying to sell my art.

I was both thrilled and extremely nervous when I got to the convention to set up my work, and saw that my display panel was right next to that of one of my favorite artists in the science fiction/fantasy illustration field. I met this artist briefly as I was setting up and bubbled enthusiastically about his new paintings on display, and how nervous I was to be exhibiting mine for the first time. A gracious professional, he offered to give me an informal critique of my art at some point over the weekend if I liked. Certainly I was eager to get some advice from a successful artist I admired, so I thanked him and hoped we’d cross paths in the art show over the following days.

I should pause here for a general observation I have made about a lot of my fellow science fiction convention attendees through the years. Sci-fi fandom tends to attract a lot of people who, for lack of better terminology, can be rather socially maladjusted. For reasons varying from being “too smart” or “too nerdy” as a kid, to not fitting in general society because of the way they look, physical disabilities, or the things they are interested in, fandom has a lot of people in it who have, quite honestly, difficulty with certain common social skills. Goodness knows I had encountered a lot of these same issues when I was an undergraduate at M.I.T., a similar environment full of extremely booksmart people who don’t always know how to interact well with others.

There can also be a high degree of “cliquishness” in fandom, and a distrust toward “newbies” entering an established fannish space. By my second day at MediaWest I was certainly getting a strong sense of that cliquishness, a feeling that I was not overly welcomed there at a convention where many of the attendees had been going annually for over a decade—and many had known each other for years before then.

Nevertheless, I ran into my fellow artist the following night in the art show, and he asked me if I wanted to talk to him then about my work. I eagerly agreed and we went over to my panel to go through my art piece by piece. He was exceptionally kind and enthusiastic, asking about my watercolor technique, how it compared to his own, things he liked in my work as well as things I could try to bring about different effects. In fact, he had not one bad thing to say about any of my pieces, even as I was clearly years behind him in mastery of technique and ability to compose a successful painting.

We were about halfway through the critique when a very strange thing happened. A fellow con attendee—not an artist herself—came over and started listening in on our conversation. I’m not sure why, unless she was perhaps trying to get an audience with the professional artist herself, and annoyed that he was devoting an extended period of time to someone else. She pushed her way past the two of us to squint closely at my work, and rudely began interrupting our conversation.

“That’s just a terrible likeness!” she exclaimed loudly, indicating one of my portraits. “And that one doesn’t look anything like the actor at all,” she said of another. For several long minutes while myself and the other artist just stood there dumbstruck, she went piece by piece through my work harshly criticizing every aspect of it, from the matting to the color choices to my pencil technique. She then, without other word or explanation, walked away from us to rejoin her friends elsewhere in the art show.

Needless to say, I felt humiliated. Here I was, with someone I looked up to and wanted to be like some day, someone who had just been graciously giving his time to mentor me, and I’d just had my work ripped to shreds by some random person I didn’t know for no apparent reason. Not even the professional artist seemed to know how to respond to what had happened. After an awkward pause, he tried to go back to his helpful critique, but it was difficult to get back into the swing of things. In my mind, at that moment, I felt like a failure no matter what he might have to say.

I sold one piece of art at the convention for a very modest $20. It was a small portrait, bought by the one friend with whom I had gone to MediaWest. At the time I figured she’d bought it just so I wouldn’t feel bad about not selling any work. But I went home from the convention completely deflated, and not wanting to show my art in public for some long time afterward. 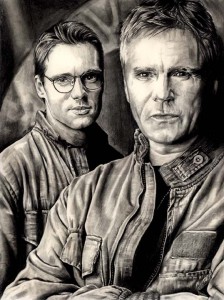 Portrait of Jack and Daniel from Stargate SG-1. The drawing which my earlier “critic” ended up purchasing years later…

I couldn’t understand why someone would feel the need to rip my work apart in front of me like that, when I’d done nothing to offend her besides hanging my pieces in the show. In my many years since then showing work at conventions, I’ve seen a lot of art infinitely better than mine, and plenty of art infinitely worse. Yet I’ve never felt the need to trash others’ hard work to their faces before, especially not in what is typically considered an amateur show for people who create their art out of love for their subject matter and to share with other fans.

I did eventually get over the incident and keep showing my art. I also started attending courses and workshops to improve my technique, and experienced teachers with many different approaches to critique to help their students improve. Yet I’ve never encountered any critic or teacher so rude as that random woman at the MediaWest artshow. I still see her around at conventions every now and then, and when I do I immediately remember how she treated me that one evening. I doubt she remembers it at all, and in fact I remember feeling some great inner satisfaction several years later when she purchased a print of one of my more recent portraits. I smiled politely at the time and thanked her. I would have liked to have added a comment about how her inexplicable meanness years before had not stopped me from drawing and painting, no matter how much she apparently thought I had no right to be creating artwork in the past.

But that would have been terribly rude of me, wouldn’t it?

An earlier version of this article was originally published on the Yahoo! Contributors Network in June 2010.