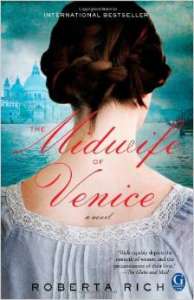 The Midwife of Venice by Roberta Rich. Available in Kindle and paperback formats at Amazon.

Hannah Levi is known to be one of the most talented midwives in late 16th century Venice. She is also Jewish, and by law that means she is forbidden from attending to Christian mothers, no matter how great their needs for her talents. However, one night a Christian nobleman comes to her home in the Jewish Ghetto desperate for her services. His wife has been in labor for days and is near death.

Hannah suspects that her secret tools—her “birthing spoons”—could help save both mother and child. But can she go against the law, and her rabbi, to attend the suffering woman? The risk is great, yet so is the potential reward: enough money in payment that she could free he husband Isaac, captured as a slave and now suffering an unknown fate on the island of Malta.

The Midwife of Venice quickly captured my interest from the opening chapter and indeed, I devoured it in a single day (of course, I was working a slow craft show at the time so I had few distractions from my reading!) Initially I wasn’t sure if I wanted to read a book with a heavy focus on pregnancy and childbirth, despite the historical Venetian setting which I always enjoy. As a woman dealing with infertility, it’s often subject matter I try to avoid in my “light” reading. But early on we learn that Hannah herself has been unable to conceive a child with her husband Isaac, a sad twist of fate for a woman dedicated to saving the lives of mothers and children in a time when childbirth was a leading cause of death for women.

I wanted to see how the issue of infertility would be addressed in this historical setting, where of course the blame for fertility problems was always placed on the woman. Indeed, Hannah and Isaac’s rabbi had already suggested to Isaac he could be released from their marriage because of Hannah’s “barrenness”, but Isaac refused and placed his love for Hannah above her ability to conceive a child. I felt strongly for Hannah as she struggled with the longing for a child within her, even as she was fully aware of the dangers she could face in pregnancy.

The author does an excellent job of bringing 16th century Venice to life with well-chosen details and historical notes. There are twists and turns to the plot,  as we follow both Hannah’s risky efforts and the danger plot she becomes enveloped in, and also Isaac’s struggle to stay alive on Malta and somehow escape slavery. Yet, oddly enough, there’s a strange lack of urgency and real tension as the story unfolds, even as both of these characters face life-threatening situations. The danger rarely comes across as fully realized, and scenes which should have had strong emotional impact often felt oddly flat to me.

There’s also a twist near the end that annoyed me as far too neat, easy and predictable. I won’t spoil it but it killed some of my initial enthusiasm for the book’s inclusion of Hannah’s infertility.

All told, however, I would still give this book a recommendation for those interested in historical fiction set in Italy, particularly fiction exploring the lives of women during the 16th century and the conflicts between Jewish and Christian cultures and communities during that time period. I see the author has now published a follow-up title, The Harem Midwife, which continues Hannah’s and Isaac’s adventures and life in the Ottoman Empire. I’ve added this title to my Wish List as I am curious to see what new adventures and challenges these characters face in their new home.