Featuring lyrics submitted by fans, it’s a humorous and catchy treat for everyone.

This article was originally published on October 4, 2010 at Yahoo! Contributors Network. 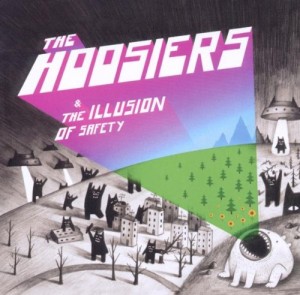 The Hoosiers’ 2010 album “The Illusion of Safety”. Available at Amazon.com

English pop-rock band The Hoosiers recently released a special treat for their fans with the 45-minute long new single, “Stop Giving Me Verses.” The song is in fact an extended parody version of the hit song “Choices” from their sophomore album The Illusion of Safety, currently receiving great critical praise and love from their fans after its summer 2010 release.

What makes “Stop Giving Me Verses” unique, besides its impressive length, is that all of the song’s new lyrics came directly from Hoosiers fans themselves. The band announced the lyric contest on June 25, 2010 on their website. Fans were to submit one verse of new lyrics along with a suggested singing style for it. Those verses which were selected would be recorded by the band, and shown in a video with the fan’s picture and lyrics in it. The lucky fans’ pictures would also be featured on the picture sleeve for the single. Due to the amazing response from fans, the band had to extend the contest entry period from July 6 to July 20, 2010.

The “Stop Giving Me Verses” single was released on ITunes on August 16, 2010. Surprisingly, besides being a clever novelty track, the epic-length single is actually quite enjoyable and remains fun on repeat listening. After a mellow piano-lounge opening, the familiar hooky, techno beat from “Choices” kicks in. Like an extended dance mix gone into overdrive, the Hoosiers’ music from “Choices” is spun, twisted, and remixed in nearly every imaginable way – with one verse breaking it down and being sung over a simple ukulele accompaniment.

Verses and the chorus from “Choices” are intermixed with the fan-submitted lyrics for “Stop Giving Me Verses” smoothly. Some fans took the challenge quite seriously, submitting lyrics which could have easily been part of “Choices” originally. Others took a much more humorous approach, submitting verses about Twitter, vampires, Frankenstein, cowboys, and curiously, repeatedly about food. Even the internet meme “OM NOM NOM NOM” gets a reference in one verse all about chocolate. Some fans took a “meta” approach to their verses, commenting on the entire exercise in rhyme:

Too much singing for one day

Life was so much easier

When I was worried about Ray

Can we stop now?

We’ve surely gone on for too long

Who decided to record

Each member of the Hoosiers takes turns on the microphone: lead singer/guitarist Irwin Sparkes, drummer Alfonso Sharland, and bassist Martin Skarendahl. Also featured singing is their regular collaborator, keyboardist Sam Swallow, and U.K. celebrities Katy Brand and Jeff Leach. The video for “Stop Giving Me Verses,” featuring all of the fan-submitted lyrics, was released in three parts on YouTube and can be viewed below:

“Stop Giving Me Verses” can be downloaded exclusively through the U.K. ITunes store for £0.99.