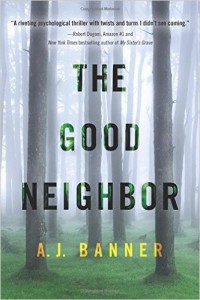 “The Good Neighbor” by A.J. Banner. Available at Amazon.

Note I said almost funny in my headline.

Honestly, this book is so bad I could not in my right mind recommend it to anyone unless you get a perverse pleasure out of reading seriously bad books.

But let me not get too far ahead of myself. I decided to give The Good Neighbor a try because it kept showing up in my Kindle Unlimited recommendations, especially for Autumn-themed reads which I was in the mood to explore. It had over 3,000 reviews on Amazon, most of them quite positive, and a write-up that said it could be “the next Gone Girl.” I also saw mention in one of the (positive) reviews that the central character was having trouble conceiving a child with her husband, and I’m always on the lookout for stories that feature characters dealing with infertility. But even in that small plot point the novel failed in every possible way.

The plot, such as it is, revolves around children’s book author Sarah Phoenix (yes, that’s her real last name) and her hunky dermatologist husband Johnny McDonald. Johnny is so desirable that apparently every other woman in the world would just steal him away if Sarah didn’t constantly keep an eye on him, and remind others that they are married despite their different surnames. Three years ago they married and she moved in with Johnny’s house on a quiet residential street in Shadow Cove, Washington, where she replaced his “bachelor pad” furniture with “lavender sachets” and “nice pieces of furniture made from sustainably harvested wood”. One night her neighbors, Monique and Chad, return home early from vacation with their daughter Mia while Johnny is away at a medical conference. Later that night, Sarah awakens to find Monique and Chad’s house on fire. In a heroic act Sarah rushes to save Mia, but then the fire spreads to Sarah and Johnny’s house.

After being knocked unconscious  by a “large object” during the fire, Sarah awakens in the hospital to find out she suffered a concussion, and that her and Johnny’s house was completely destroyed in the fire along with Chad and Monique’s. Chad and Monique perished in the blaze, leaving Mia parentless, save Chad’s mother. Devastated at the loss, Sarah and Johnny have to move into a rental cottage while preparing to rebuild their life together. But apparently the fire marshal suspects arson, and Sarah suspects that Johnny may be having an affair. Or several of them, given his suspicious behavior and how she keeps finding what appears to be signs of his infidelity everywhere. Sarah begins to wonder if her whole happy life with Johnny has been a lie.

This novel is so bad, so ridiculous, it’s almost hard to know where to even begin. One could say, from a positive standpoint, that it jumps right into the action, which is true. But it does so before we have any reason whatsoever to really care about Sarah or any of the other characters and highlight’s the novel’s unbelievability right from the start. Sure, with the fire department on the way, the other neighbors are just going to find a ladder for Sarah and stand back while she shoves a brick into her sweatshirt pocket (!) and climbs up the side of the blazing house to rescue a little girl. Uh huh. And when two people are dead and arson is suspected, there’s going to be no police involved in the investigation, just the fire marshall? Okay.

And every little thing that happens and Sarah finds is going to completely point to her husband having an affair. Like how in the ruins of Johnny’s home office, she miraculously finds an intact envelope containing a photo of Johnny and a woman she doesn’t recognize (even though that woman’s been her neighbor for three years. A woman whose looks she’s commented and mused upon deeply before.) Or when Johnny moves out of their rental cabin, the one pair of pants he leaves behind has a receipt in its pocket for the flowers he bought for another woman. Of course.

The characters in The Good Neighbor never develop beyond boring cliches and stereotypes, with the author relying on detailed descriptions of their clothing, jewelry and scents instead of details that actually would reveal personality. The one Hispanic woman on Sarah’s street cannot appear in a scene without exclaiming “Dios Mío!” at least once. The teenage girl in the neighborhood has an abusive boyfriend who mocks Sarah and her Miracle Mouse books with lame lines like, “All that…writing about rodents. Is that why your old man left you? All the rats in your brain?”

The dialog in general is atrocious and bears little resemblance to how real people talk, full of jarring non sequiturs and painfully awkward lines.

“You’re learning what you’re made of. Haven’t you heard the saying a woman is like a tea bag, you never know what she’s made of until you dip her in hot water?”

Most of all, the way Sarah related to other women in this story in general truly aggravated me. She seems so obsessed with their appearances, any movement they make that could be interpreted in a sexual fashion toward her husband, that I could only think she’d be a dreadful wife to have to live with, constantly suspicious of her husband straying from their relationship. If I were Johnny I would have gotten out when I had the chance. Especially when it turns out that Sarah’s suspicions are almost entirely unfounded and the real villain of the story is at last revealed in a ridiculous last plot twist.

At the end of the day, this book read like the script of a bad Lifetime movie and failed to pay off on any level as a satisfying story of suspense, or any deeper statement on what can lie beneath the surface of a tranquil neighborhood. So don’t believe the hype on Amazon—which I wonder if it was created at least in part by Amazon itself, as this book is part of their publishing program.

My rating: 0.5 (1/2 out of 5 stars) I only gave the book a half star because I did manage to finish it, although admittedly doing so was quite a struggle.