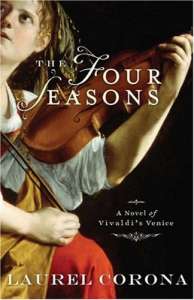 The Four Seasons by Laurel Corona. Buy it now at Amazon.

Book summary: Two young sisters—one three years old, one just born—are abandoned to the Ospedale della Pietà in 18th century Venice by their courtesan mother who can no longer afford to take care of them. At the Pietà, the two will be raised with the other young girls, learning there to make lace.  More importantly, they will betrained to be part of the figlie di coro, who perform sacred music for religious services, and also privately for donors to the Pietà who pay handsomely for their concerts.

These two young sisters could not be more different in talents and temperaments. Younger Chiaretta is gifted with a beautiful voice, attractive looks, and a boisterous spirit. Maddalena, in contrast, is more thoughtful, introspective, and only loves one thing more than she loves her sister: the music of the violin. When Antonio Vivaldi is hired as a violin teacher at the Pietà, Maddalena’s life is changed forever—and so is that of the great composer, who finds an inspiring muse in this young girl despite the situations of their lives which forbid them both the true closeness they desire.

My review: This book provided a fascinating and engaging look at a part of Venice’s history I knew little about. 18th century Venice faced tremendous problems due to the numbers of illegitimate and unwanted children being born. Even families of social standing and wealth could typically afford to only marry off one of their daughters; any others would typically be shipped off to a convent to keep them out of trouble. Generally only one son would marry as well, leaving others to satisfy their desires with the city’s courtesans—only exacerbating the problem of illegitimate children everywhere!

Orphanages like the Ospedale della Pietà played an important role in providing a life and home for abandoned young girls, even if their fates and futures were typically limited to remaining the Ospedale as a teacher themselves, entering a convent upon coming of age, or for a very lucky few marriage if they were talented and pretty enough to catch a donor’s eye. But upon marriage, such as the one Chiaretta enters into, these young women were forbidden to ever sing in public again to protect the special place of the Pietà in Venetian society.

It took me a few chapters to warm up to the girls’ story and to the author’s writing style, but eventually I was fully absorbed into The Four Seasons and the contrasting ways the sisters progressed. Chiaretta struggles to find her place in Venetian society once married, and to also understand how her husband could love her while still seeing a courtesan on the side— even encouraging her to seek out her own “companions” provided she is discreet and careful about her affairs! Maddalena, meanwhile, struggles with her complicated feelings for Vivaldi, initially portrayed beautifully as a teenage crush but later in life, a deep affection and bond of love which can only find expression between them through the music he writers for her. The descriptions of music and performing are excellently described and come to life for the reader, even if you are not a student of classical music and the violin yourself. Several months after reading this book, I had the opportunity to return to Venice and see a performance of “The Four Seasons” there itself, and even the original site of the Ospedale which is now a hotel and restaurant (the Metropole).

This is a well-researched book, although the author is clear in the end notes to explain what is and isn’t factual about the characters and their lives, and how little is truly known historically about Vivaldi outside of his music. I would definitely recommend this book to anyone interested in historical fiction, music, and also the struggles of women in past centuries when the options available to us were so greatly limited.