Religious relics and one of Michelangelo’s most powerful sculptural works make San Pietro in Vincoli worth a visit. 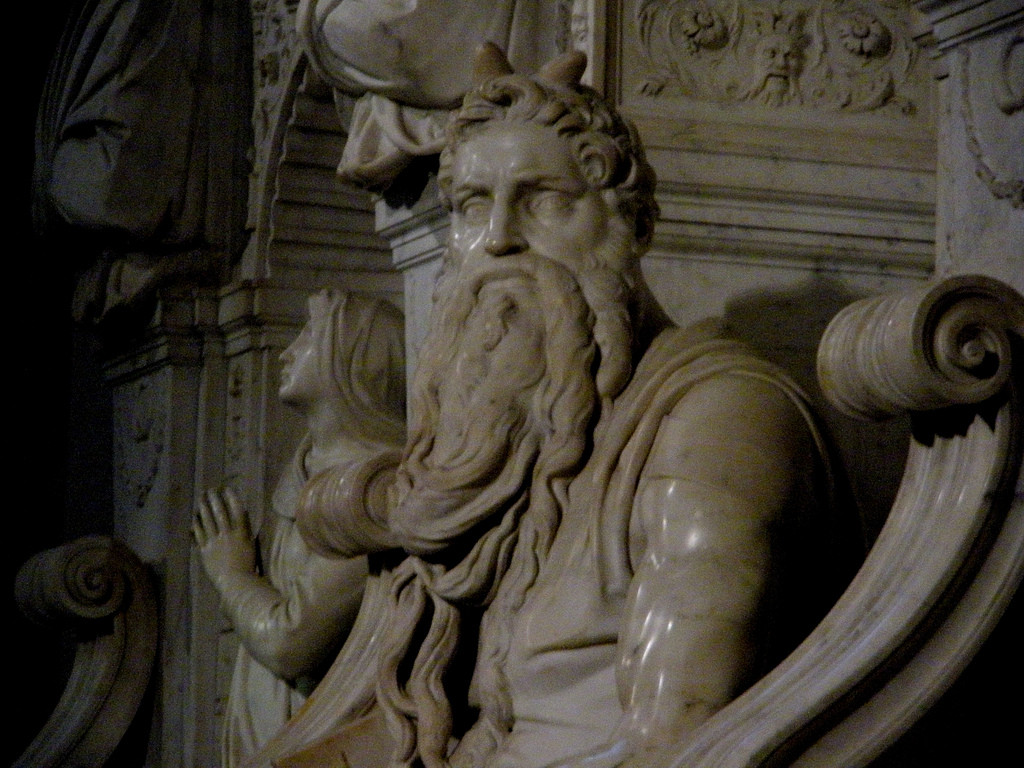 Close-up of Michelangelo’s impressive statue of Moses, on view in San Pietro in Vincoli. Photograph by the author, sockii.

Rome is one of Italy’s greatest cities, and the wealth of history and art contained within its churches is one of many reasons to visit. San Pietro in Vincoli, known in English as “Saint Peter-in-Chains,” is one such church that should most certainly be seen while in Rome. Besides holding important religious artifacts, the church also is home to one of Michelangelo’s most memorable sculptural works, Moses, which was meant to be part of a magnificent but never completed tomb for Pope Julius II.

The History of San Pietro in Vincoli 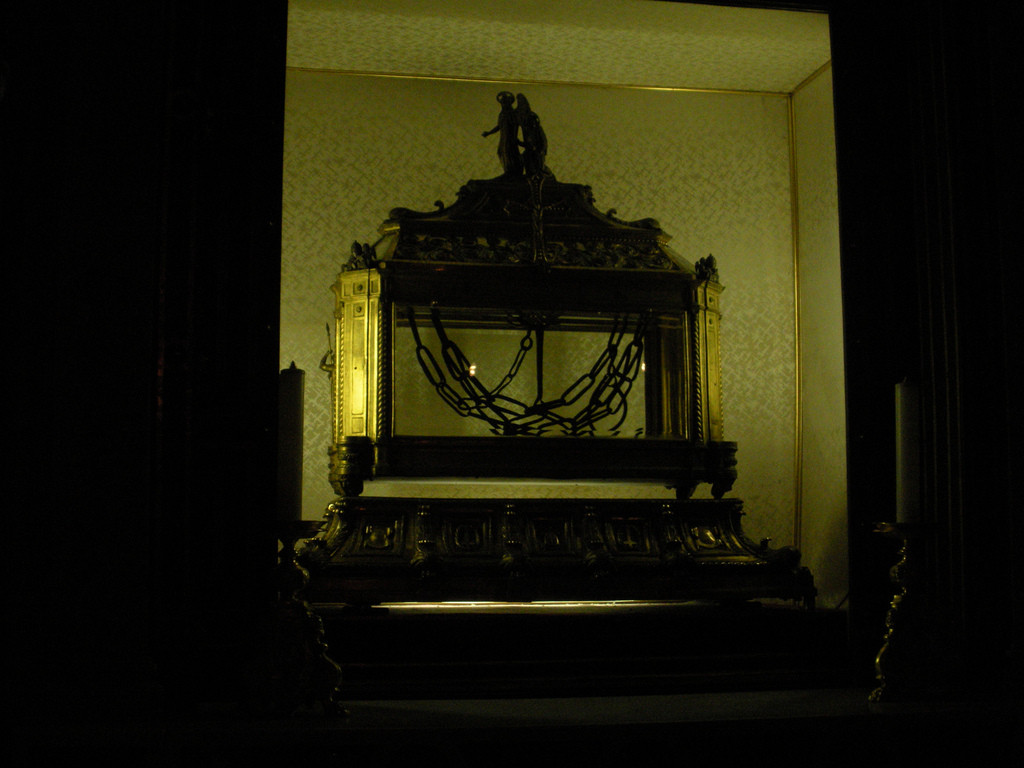 The reliquary of Saint Peter’s chains. Photograph by the author, sockii.

This church is one of Rome’s oldest, built in 432-440 AD specifically to house the relics of the chains said to be those which bound Saint Peter while he was imprisoned in Jerusalem. The chains were given to Pope Leo I by the Empress Eudoxia, wife of Emperor Valentinian III, who had received them from her mother Aelia Eudocia, the consort of Valentinian II. She, in turn, had received them from Iuvenalis, the bishop of Jerusalem.

Legend has it that when Leo went to compare these chains to those from St. Peter’s final imprisonment in Mamertine Prison in Rome, a miracle occurred and the chains fused together. A reliquary in the church now houses these chains beneath the main altar of the basilica.

The basilica was consecrated in 438 by Sixtus III and has gone through several restorations since then. One of the most significant was in 1475 with the addition of a front portico, and a cloister attributed to Guiliano da Sangallo was added between 1493 – 1503. Another renovation took place in 1875, however the twenty Doric columns flanking the nave are from the original construction.

Architecture and Artwork in San Pietro in Vincoli 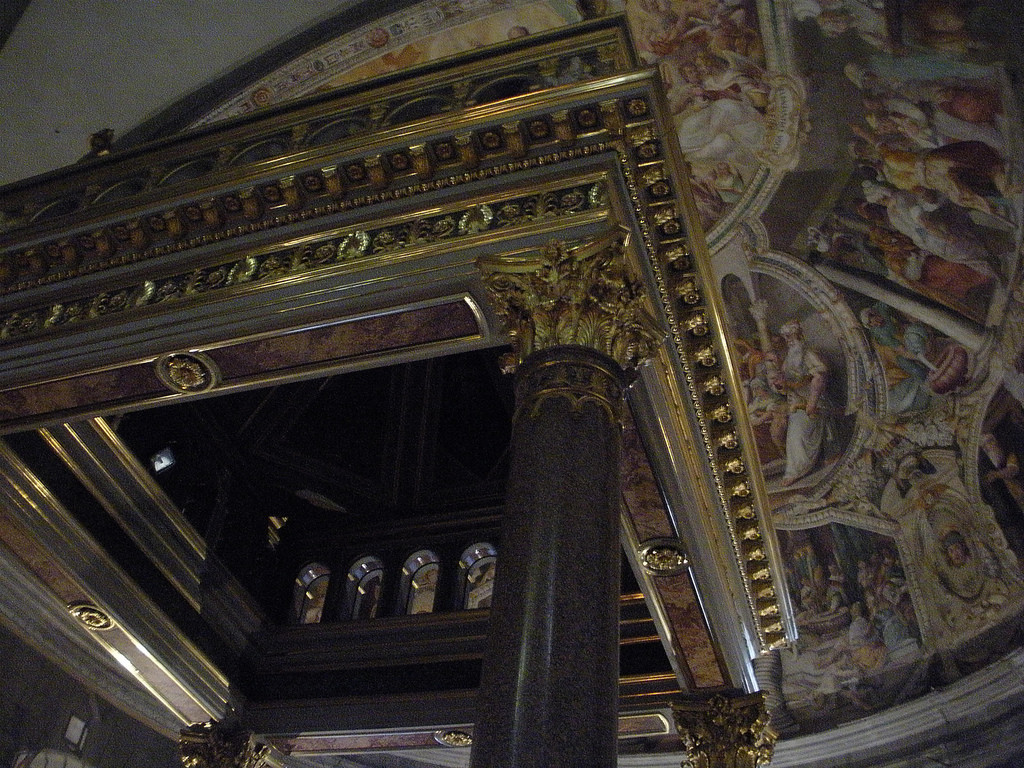 The raised tribune of the church, with frescoes by Giacomo Coppi. Photograph by the author, sockii.

The architecture of San Pietro in Vincoli features a nave with two aisles, and three apses divided by the Doric columns. An 18th century coffered ceiling above the nave features frescoes by Giovanni Battista Parodi, which tells the story of Saint Peter and The Miracle of the Chains.

The most important work of art in the church is Michelangelo’s Moses, a striking work of sculpture which should definitely be seen by all visitors to Rome. It was intended to be part of a magnificent tomb which Michelangelo was commissioned, in 1505, to build for Pope Julius II. Michelangelo planned a three-story structure of marble to be filled with statues and bronze reliefs, all of which was to be placed in St. Peter’s Basillica. However, soon after he began working on it, Julius changed his mind and ordered Michelangelo to work on the Sistine Chapel instead. After completing the chapel’s frescoes, the artist would return to work on the tomb on and off for thirty years until Julius died in 1514 and funding for the project ran out.

Fortunately, the section of the tomb featuring Moses had been completed by this time, and now stands inside San Pietro in Vincoli along with other sections of the tomb pieced together in 1542 by Michelangelo’s assistants. While other figures in the tomb were completed by assistants, Moses was entirely Michelangelo’s work and his mastery of sculpture is clearly evident in this powerful piece. Here, Moses is depicted after having just met God. Returning home, he senses trouble among his people. His anger builds at seeing his followers worshiping a golden calf and we see him in the sculpture poised, full of tension, ready to strike out. He clasps the Ten Commandments under his arm while his body is twisted, at once both in rest and in motion.

Besides the mastery of form, figure and movement, Moses is also notable for the controversy and misunderstanding which has followed from Michelangelo’s placement of horns upon the figure’s head. In medieval times, the Hebrew word for “halo,” or “rays of light,” was mistranslated as “horns.” Although Michelangelo knew this was a misinterpretation, he felt horns would indeed give his Moses a air of power and menace well suited for the tomb of Pope Julius II.

When viewing Moses, be sure to spend time studying the sculpture not just from the front of the monument, but from the side – from which viewpoint you can truly feel the intensity of his glare. There is a lightbox which accepts Euro coins for illumination, also a must to appreciate the play of light against shadow in the work. 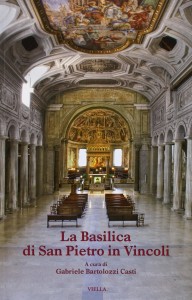