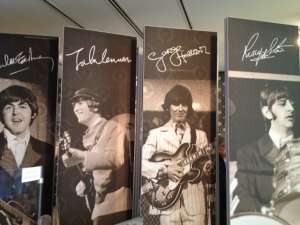 “Ladies and Gentlemen…The Beatles!” exhibit at the New York Public Library for the Performing Arts. This and other exhibition photos on this page are by the author, sockii.

Fans of John, Paul, George and Ringo who find themselves in New York City should make a date to visit the New York Public Library for the Performing Arts to see “Ladies and Gentlemen…The Beatles!”

This special exhibit, currently running through May 10, 2014, celebrates the 50th Anniversary of The Beatles’ first trip to the United States and their appearance on The Ed Sullivan Show—an event that would forever change American music and seemingly inflict “Beatlemania” on an entire nation. With archival video footage, vintage memorabilia and ephemera, and fun interactive installations, this exhibit is sure to delight those who remember the 60’s British Invasion as well as those who never had the chance to experience it for themselves.

“Ladies and Gentlemen…The Beatles!” covers far more than the band’s first trip to America. The exhibit explores the musical atmosphere of the country before their arrival and its state of limbo at that time: Elvis Presley had been drafted into the army; Ritchie Valens and Buddy Holly tragically gone too soon; Johnny Cash was turning away from rock to country and other bright stars were suddenly out of the spotlight. The U.S. was ready for something fresh and new, and no one could fill the existing void better than The Beatles, a group of young British musicians who drew much of their inspiration from earlier American rock and roll.

The American press, however—and most American parents—looked at The Beatles with confusion, skepticism and disdain. Why were teenagers were going completely crazy for these four British boys with their “mop-top” haircuts, too-short suits and raucous music? Surely it was just the latest fad that would soon fade away like every other pop sensation had in the past…or so they hoped.

But that wasn’t going to be the case. 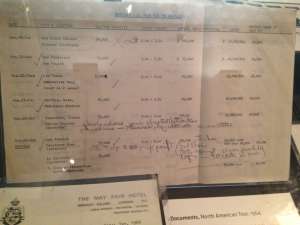 Proposed tour dates, ticket prices and projected earnings for one of The Beatles’ tours of America.

The exhibit at the Library for the Performing Arts covers not just that first tour by The Beatles of America in 1964 but their two following ones, the final being in 1966. At that time, the frenzy was too much for the band and their music started to become too complex for on stage performances in huge stadiums—where no one could hear a note they were playing, anyway! Printed matter on display in the exhibit spotlights the news media’s confusion over the band in 1964, including such items as an article by Doctor Joyce Brothers trying to explain their appeal to perplexed parents and assuring them The Beatles were not harmful to their children. There are setlists from early performances handwritten by Paul McCartney, and fan letters penned to their faithful, early supporters. There are also fanzines, homemade scrapbooks, ticket stubs and fascinating legal documents detailing the finances of what it cost to take the Beatles on tour—and just how much money they could expect to make at various venues!

Video screens and listening stations throughout the exhibit allow visitors to watch archival footage of Beatles fans in the streets of New York City, waiting outside the band’s hotel or at the airport for a glimpse of their idols. You can try your hand at playing skiffle instruments, or sit down at an electronic drum kit set up like Ringo’s set and take a basic drum “lesson” from Ringo himself. 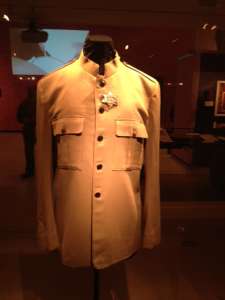 There are also items of Beatles memorabilia which are sure to give dedicated fans a case of the goosebumps, as they did for me: the jacket worn by Paul McCartney at the legendary Shea Stadium concert; Ringo’s black coat as seen on the Abbey Road album cover; a pair of John Lennon’s glasses and one of George Harrison’s guitars. Altogether these items paint a “fab” picture of Beatlemania in America in the 1960s and the band’s endearing legacy on music lovers around the world. I highly recommend seeing the exhibit for yourself, if you can.