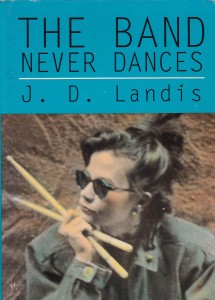 “The Band Never Dances” by J. D. Landis. Available for purchase at Amazon.com.

– Judy Valentine, from her song “The Girl Inside The Girl”

The above lyrics are some of many sprinkled throughout “The Band Never Dances” by J. D. Landis, the story of young drummer Judy Valentine and her quest to find a band—and perhaps her true self along the way. This book is one I wish I had found at age it is supposedly written for: later teens. It is actually one of the more mature and captivating Young Adult novels I can remember ever reading, even though I did not find it until I was well into my thirties.

Perhaps being a female drummer myself-albeit just as a hobby-I was particularly captured by Judy’s story. Although it is not a perfect book and unfortunately one that is long out of print, it is a novel I recommend strongly to readers of any age who have a passion for music and music-related stories.

Judy Valentine has always loved music, and long felt a connection to rhythm, the beat, and the drums. Growing up she is closest to her older brother Jeffrey, whom no one in her family realizes is deeply troubled until he shockingly commits suicide. Judy’s parents withdraw in their grief, and Judy retreats further into her drumming and music after his death, even keeping his ashes with her in a clear-cased tom-tom drum. As were her brother’s wishes, she completes school early at the age of sixteen and immediately sets out on a quest to find a band.

This early section is easily my favorite part of “The Band Never Dances,” as Judy leaves home and pulls together the oddest assortment of characters imaginable to form a rock group. She first challenges the enigmatic signer Strobe to accept her—as a musician and a friend—after responding to his mysterious ad in the paper for a drummer. It isn’t her drumming that impresses him, however, but her writing ability, after she sends him some of her lyrics.

Strobe is much older and very worldly compared to Judy, having seen a great deal of the music world in a “past life” which remains a mystery to Judy and the reader through to the end of the book. She moves into Strobe’s warehouse loft in New York City, where he challenges her to improve technically as a drummer, to learn how to play the drums with others instead of simply by herself. He also begins to teach her how to sing.

Soon they find a middle-aged, pot-bellied classical pianist named Irwin and recruit him into the band, just as he is on the verge of critical success after playing a solo recital at Carnegie Hall. An African-American bass player named Maddox is their next recruit, having found him playing one night in a gay bar. The last piece in their musical puzzle is a young guitarist discovered in Central Park who seems to have incredible gifts, and goes by the unusual name Mark The Music. Together the five of them become “Wedding Night,” and Judy finds herself on a whirlwind path to success as the band moves from early struggles and small gigs into super-stardom. Judy also soon finds herself in the middle of a love triangle with Mark and Nick Praetorious, a megastar with whom Wedding Night goes on tour.

Who will Judy choose, Mark or Nick, if either of them at all? Will she stop “hiding behind her drums,” as Jeffrey had in the past and now Strobe chides her for doing, as Strobe tries to lead her out to the front of the stage to take her rightful place as the band’s leader?

There is much to enjoy about “The Band Never Dances,” for young and older readers alike. The book is very well written with nice turns of phrase and good relationships drawn between the characters-the unlikely friendship between Irwin and Maddox is particularly charming. Judy makes a strong role-model for young girls in many ways, by remaining true to herself and not letting the various men in her life, romantic or otherwise, dominate or control her.

Author J. D. Landis also clearly has familiarity with the world of rock music, if not the particulars of actually being a musician or a drummer. There are many clever references to real places, venues, and musical acts of the 80s time period where the book is set. Many of those might seem a bit dated to today’s readers, admittedly, but it makes for a fun bit of nostalgia to this child of the 80s herself.

Where I had a little problem, perhaps as an adult reader who has done a great deal of non-fiction reading on the music industry, was accepting some of the fantasy aspects of the story. The members of Wedding Night make for a clever assortment of characters for a book, but they are not so believable as a genuine pop-sensation rock band. At times Judy also comes across as a little too perfect and talented, almost what would be called a “Mary Sue” in fandom. In one year, at age 16, she is able to put together a band where she plays drums (and later sings), writes the bulk of the music, scores a demo, scores a first album recorded in a high-price studio in the Caribbean, gets a place as the opening act for supposedly the biggest singer in the world at the moment, becomes a cover girl for countless magazines including Rolling Stone, and then ends up headlining a show at Madison Square Garden in New York City?

There’s a limit to suspending one’s disbelief, and this reader found herself pushed well beyond that. In the end, I had to simply accept it as probably being what I might have fantasized about at a youthful age, but something I know now is a far stretch from any reality that a young musician is likely to face.

Still, despite some flaws J. D. Landis’ “The Band Never Dances” is a book I’ve been compelled to not just read but re-read every few years, drawn back to this magical world where music, friendship and love can conquer the worst challenges in our lives. It is definitely a novel I would recommend as a positive source of inspiration for young women, as well as to music fans of all ages.

A final note to parents: You may wish to preview this book first before passing it along to a teen under the age of 14 or 15. While the book is full of positive messages, being set in the rock and roll world there is mention of drug and alcohol abuse, as well as some sexuality although no explicit sexual content.

Search for a copy of “The Band Never Dances” at Amazon.

This review was originally published at Yahoo! Voices on June 17, 2010.