This review was originally published at the Yahoo! Contributors Network on June 14, 2010. 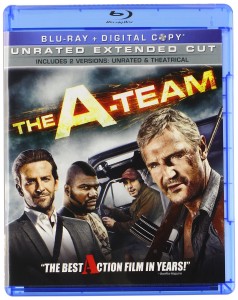 The A-Team: Available in Blu-Ray (and other formats) at Amazon.com

After over a decade of rumors, failed scripts and other production woes, an A-Team movie finally hit the big screen on June 11, 2010, just in time for the summer movie season to kick into high gear. And The A-Team movie certainly makes a play for those highly coveted summer audiences, dialing the explosions and impossible action up to extreme heights-and the decibel level as well. But does it succeed in capturing the spirit of the 1980s original series which made Mr. T a cult hero and gave us such catchphrases as “I pity the fool” and “I love it when a plan comes together”? Will it please fans of George Peppard, Dirk Benedict and Dwight Schultz, who gave us the memorable characters John “Hannibal” Smith, Templeton “Faceman” Peck, and “Howlin’ Mad” Murdock?

As a diehard fan of the original A-Team series, there was much I found enjoyable about this movie adaption. Indeed, I spent the first hour of the film with a huge grin on my face, thrilled by the little nods to my favorite show and the feeling that those involved in this production had been genuine fans, not simply people trying to cash in on and recycle another old idea. But my enthusiasm began to wane a bit through the second half of the movie, as big action sequences and overly complicated scripting began to leave me fatigued, confused, and somewhat disappointed.

The A-Team movie does what the original television series never did, and that is to begin with an actual team “origin” story. We first meet up with Liam Neeson‘s Colonel Hannibal Smith as he is racing to save Bradley Cooper‘s Lt. Templeton Peck from certain death in Mexico-for sleeping with the wrong person’s wife. It’s a classic A-Team scenario, although now both Smith and Peck are Army rangers instead of Vietnam vets and what they’re doing in Mexico is, well…not exactly important. Smith happens to run into a disgraced Army Ranger, one Bosco “B.A.” Baracus, and of course instantly knows it is fate that they should cross paths. After rescuing Peck, Smith rushes them to an Army medical hospital to treat his men-and recruit institutionalized Ranger pilot “H.M.” Murdock to complete his mission via a wild aerial dogfight that leaves B.A. with a fear of flying for the rest of his life.

It’s a cute set-up that all takes place before the credits even run, and does a nice job of establishing these four unique characters for the audience. The essence of who they are has been clearly captured from the original A-Team, even if the time and setting has changed to the modern day.

The main bulk of the movie takes place eight years later, where Smith’s “A-Team” is now a highly-regarded elite squadron stationed in Iraq. In a very clever nod to the original series, the Team is recruited by a CIA Agent named Lynch to steal back U.S. treasury plates possessed by Iraqi insurgents, as well as over 1 billion dollars in counterfeit currency. But something seems wrong about the mission, at least to Hannibal’s commanding officer General Morrison (Gerald McRaney) and Peck’s old flame, Captain Sosa (Jessica Biel). The Team succeeds through an insane plan, but then are set up to look as though they stole the money and the plates on their own. Morrison, their only proof that they were acting on orders, is murdered. Thus the A-Team are “sent to prison for a crime they didn’t commit,” a brilliant re-imagining of the original series and the Bank of Hanoi job for which the Team was framed.

Six months later, Smith and his A-Team are given a chance to prove their innocence by escaping from prison to find the missing plates and bring those responsible to justice. It’s here where the plotting of the film begins to get extremely muddled and the action goes beyond overdrive. The breakout scenes for each of the four characters are clever, and reveals an interesting twist in B.A.’s characterization: he has undergone a spiritual awakening in prison and no longer feels comfortable with violence, and in particular he can no longer kill. But after that, things get a little convoluted and tedious as too much of the emphasis shifts away from the Team and to Sosa, Lynch, and the evil Brock Pike, a member of a private security firm (a la Blackwater) who now has the plates and is desperate not to lose them, nor be revealed as the one who set up the Team for Morrison’s murder. Each action set piece from this point forward tries desperately to top the last, from a parachuting tank engaged in aerial warfare to a beyond ridiculous finale at the Los Angeles dockyards involving exploding ships and tumbling cargo containers. By this point, the film left this viewer feeling fatigued and ready for it all to be over soon. 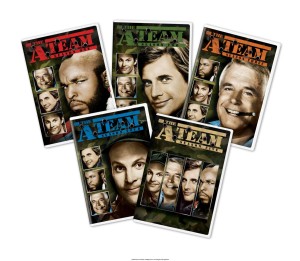 Relive the 80s with The A-Team on DVD

The four main male leads succeed to varying degrees in capturing the spirit of the original characters, although none are likely to replace them in popular culture memory. While I generally enjoy Liam Neeson’s work, here he seems woefully miscast as Hannibal. He fails to capture George Peppard’s snark and humor, only managing to do well with Hannibal’s loyalty to and love for his “boys,” and for coming up with insane plans. I would have actually envisioned Bruce Campbell doing much better with the role today. Bradley Cooper does better in capturing Dirk Benedict’s sly, charming Faceman, seducing women easily and using his skills to scam his way in and out of most situations. Sharlto Copley is impressive as Murdock, the character I was most worried about as I am such a fan of Dwight Schultz’s original. It’s a pity they didn’t give him enough chance to do more with the role, but when he’s on screen he’s brilliant, balancing humor with seriousness beautifully. Quinton “Rampage” Jackson was actually the biggest surprise to me, as he managed to bring a depth of character to B.A. which was, in many ways, missing from the original. His B.A. is not just a tough guy spouting catch-phrases; he’s a real character, with real conflicts, and perhaps the most developed of all four of the characters in this adaption.

Jessica Biel’s Captain Sosa was not as annoying as I expected her to be, although focused on far more than necessary for this fan who wanted more of the Team itself. Certainly, though, she portrays a more interesting character here than the original A-Team female tag-alongs, reporters Amy Allen and Tawnia Baker. Brian Bloom chews up the scenery as the evil Brock Pike, and Watchmen‘s Patrick Wilson is fine, if forgettable, as CIA man Lynch.

I enjoyed how the film managed to capture two of the key relationship dynamics within the A-Team. The Hannibal/Face mentorship is played beautifully by Neeson and Cooper, bringing out this element of the original series very well. Hannibal berates Face when he lets women distract his focus, yet he also beams with pride when Face comes up with the plan for getting Pike. Jackson and Copley also excel in bringing out B.A. and Murdock’s love/hate friendship, just as in the original series. Although B.A. is always complaining about Murdock’s craziness and not wanting to fly, he clearly loves “the crazy fool” like a brother, and his temper is always cooled when Murdock cooks for him! If only the movie had devoted more screen time to good character moments and less to over-the-top action. Disappointing, too, that Dirk Benedict and Dwight Schultz’s cameos were so brief and cut out of the main film, only to be seen at the very end of the credits when most of the audience has long departed the cinema.

Is The A-Team movie a plan that successfully came together?

This A-Team fan left the theater relatively satisfied and gives the film a solid B rating. In many ways, it was better than I had expected it would be, from the acting to the many small nods, references and in-jokes throughout to the original series. But it’s still a typical summer popcorn flick in many ways, meant for kids and adults who just want to see things blow up. If bloated action movies with nonsensical plotting, explosions so loud you can’t hear the dialog, and fights cut so fast you can’t see who’s hitting whom isn’t your thing, you’ll probably want to skip this one.