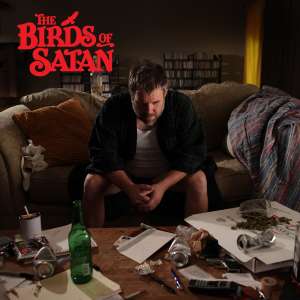 The Birds of Satan. Check price at Amazon.

Imagine, if you will, that Pink Floyd’s “Welcome to the Machine” had a love child with Aerosmith’s “Dream On”. The end result just might sound a great deal like “Too Far Gone To See”, the final and perhaps best track on The Birds of Satan‘s self-titled debut album. The band is the latest solo project from Foo Fighters drummer Taylor Hawkins, and is an all-out tribute to the hard rock, glam and prog bands he has so often credited as his greatest musical inspirations.

Previously Hawkins has released two albums with his first side-project band, Taylor Hawkins and the Coattail Riders. Scheduling conflicts caused that band to dissolve last year, so Hawkins turned to the members of his other side project, Chevy Metal, with which he has performed heavy metal and hard rock cover sets sporadically in the past.  Chevy Metal thus became The Birds of Satan: Wiley Hodgden on bass guitar and vocals, Mick Murphy on guitar, and Hawkins on drums and lead vocals. The album was recorded in just a week’s time at Foo Fighters bandmate Dave Grohl’s home studio, and the end result is refreshingly raw, rocking and fabulous.

The album opens with the epic length (9 1/2 minutes) “The Ballad of the Birds of Satan”, a complicated Rush-meets-Black Sabbath rocker of multiple movements with a dash of Queens of the Stone Age thrown in for good measure. (Hawkins sounds so much like Josh Homme at one point on this track I was sure he’d made a guest appearance on the record!) After that exhausting show of bravado drumming and guitarwork, the hooky, crunchy  “Thanks for the Line” is a welcome relief. It’s a perfect showcase for Hawkins’ drumming and vocals, which show significantly more range and confidence here than on his previous solo recordings.

“Pieces of the Puzzle” follows, a song which gives late 70s ska and punk a spin with its frenetic drumming and crisp guitarwork before coming in for a finish in dramatic Queen fashion. “Raspberries” takes things in a quieter, more reflective direction. It’s a beautiful pop-power ballad clearly meant to pay tribute to the 70s band of the same name.

“Nothing at All” leads Hawkins back into Queen territory, and could have easily been titled “Crazy Little Thing Called Love Part II”. Derivative? Yes, but it will still get your toes tapping and fingers snapping along. The only song on the album that doesn’t quite grab me is “Wait Til Tomorrow”, which sounds a bit too much like some of the more forgettable Coattail Riders tracks—all hyped-up energy but lacking any real hook or musical appeal.

I’ve already mentioned the album’s final track, the gorgeous “Too Far Gone to See” which builds from a haunting opening half into a powerful—and very Floydian—finale. All in all it’s a great little record, short (just 34 minutes) but sweet. If you love drum-heavy rock and a good dose of 70s classic prog and glam nostalgia from time to time, I definitely recommend you check out The Birds of Satan. It’s certainly one of my favorite musical releases of 2014 so far, and hopefully not the last time we’ll hear from this terrific trio.