This review was originally published at the Yahoo! Contributors Network on May 5, 2010. 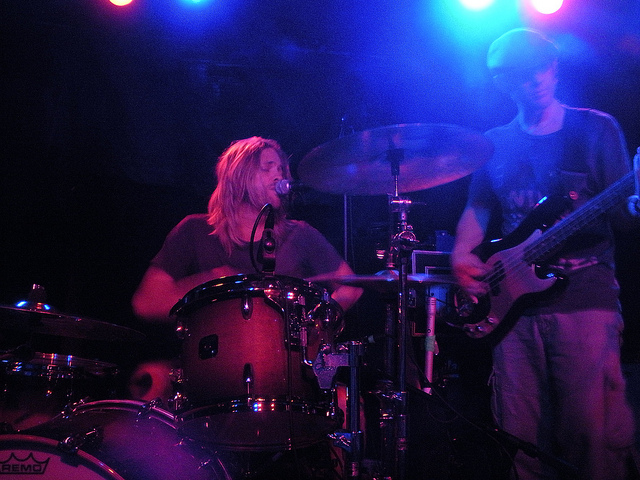 Taylor Hawkins and the Coattail Riders, live in Baltimore May 4, 2010.

. His trio, Taylor Hawkins and the Coattail Riders, consists of himself on the drums and vocals, guitarist Ganin and bassist Chris Chaney. On the tour, the band is supplemented by an additional guitarist, Nate Wood.

While the Coattail Riders tour has already made its way across the West Coast, I had the chance to catch them last night with some friends at the Sonar in Baltimore, Maryland. The Sonar has two different stages and Taylor Hawkins’ band was playing on the smaller one. Doors were to open at 7pm, but we saw that the band did not arrive until nearly 6pm. They seemed to be having issues with the sound quality of the room, as they could be heard performing soundchecks until about 7:45pm. Indeed, we could tell standing in the line outside that the room was going to be extremely loud, so we were thankful to have brought our earplugs.

Doors finally opened about 8 o’clock. A local trio from Baltimore opened, playing a short, rather unmemorable but not unpleasant set. During the changeover, I snapped a quick picture of the setlist so I’d know what was coming once Taylor Hawkins and his band hit the stage. The band would be playing the same set as they had played in Boston on Sunday, May 2, 2010, apparently. This was fine by me, as I saw a number of my favorite tracks from Red Light Fever and Hawkins’ self-titled first album would be featured. 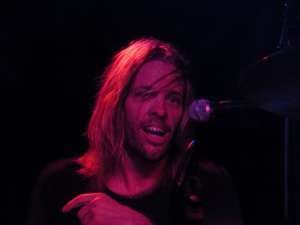 The Coattail Riders hit the stage a little after 9pm, ripping into a solid version of the opening track of Red Light Fever, “Not Bad Luck.” We’d heard them play through this song about four times during the soundcheck, and now could hear why they’d been so concerned. The room was so loud and “boomy” it was difficult to hear Taylor’s vocals above the din of the music. That said, standing right in front of Taylor and against the monitors, I still had a pretty good sound experience – though again I was ever so thankful for those blessed earplugs!

“Louise” was the second track of the night. This sounded really good, and I could hear how much tighter the Coattail Riders were as a band compared to when I first saw them touring four years ago in Philadelphia. Now if only these guys would release albums more often! “Hole in my Shoe” from the new album was next. It’s not my favorite track from Red Light Fever, but it ended up being a fun live number and you could tell the guys enjoyed playing it. I was more excited to hear “You Drive Me Insane,” as it’s just a blistering track and full of drumming clearly inspired by my favorite rhythmatist, Stewart Copeland. “Your Shoes” followed, a song which features backing vocals by Queen’s Roger Taylor on the album. Taylor talked about “his friend in England” who had helped with the track in the studio and mentioned how the Coattail Riders would be heading to the United Kingdom soon – leading one to wonder if there might be a special guest appearance by the Queen drummer at one of those shows.

Next up was my absolute favorite track from the Coattail Riders first album, “Running in Place.” This complex, multi-part song brilliantly recalls the progrock of 70s acts like Genesis and Yes. I was only disappointed that on the tour, Taylor is leaving off the final movement of the song, but it still sounded amazing otherwise. “Get Up I Want To Get Down” followed, another song from the first album featuring complicated rhythms, and the band jammed on this one for a while. “Walking Away,” another heavy rocker, was after that, then the band mellowed out a bit for the slow-burning “Never Enough.” Chris Chaney got a good laugh out of the little kid next to me in the front who whipped out his iphone’s Zippo lighter for the number.

“Way Down,” the band’s single from Red Light Fever, came next. This song was as much fun live as it is on the album, just a great, swinging retro-rocker. “It’s Over,” one of my favorite tracks from the new album, closed out the main set with some nice extended soloing from Ganin. Taylor asked the audience if we wanted an official “encore” or for them to just keep playing. The majority vote was to just keep playing, so they immediately launched into another great number from the new album, “I Don’t Think I Trust You Anymore.” The set finished with “Sunshine,” a track I definitely liked hearing better now live than on the album where I didn’t think it was the best.

Taylor thanked everyone for coming out to the show and seemed genuinely appreciative of the fan support for this small solo tour. I don’t think there could have been more than a hundred people in the room for the show, at best, but it was definitely a group that knew and loved his music. The band played hard and rocked out for nearly 90 minutes – well worth the $15 ticket price.

After the set we got some autographs from Ganin and Nate inside the Sonar, and then waited with some other fans outside to see if we could get a minute or two with Taylor. He came out after about a half-hour and was very gracious with everyone who asked for photos or autographs – including myself! It’s always great when someone is patient and pleasant with their fans (provided, of course, that the fans are being patient and pleasant to begin with, but last night’s crowd was pretty well behaved.)

All in all it was a great evening and a wonderful performance. If you have the chance, try to check out Taylor Hawkins & the Coattail Riders at one of their two remaining U.S. shows, in New York City on May 6 and West Chester, Pennsylvania on May 7. After that, they’re off for a series of summer shows and festival appearances throughout Europe. Find out more at their official website, http://www.taylorhawkins.com/.

See my full photo album from the concert at Flickr.