On May 6, 2010, Taylor Hawkins and the Coattail Riders played at The Gramercy Theatre in New York City, New York. The Foo Fighters‘ drummer was on tour in support of his second solo album, Red Light Fever.

This review was originally published at the Yahoo! Contributors Network on May 9, 2010. 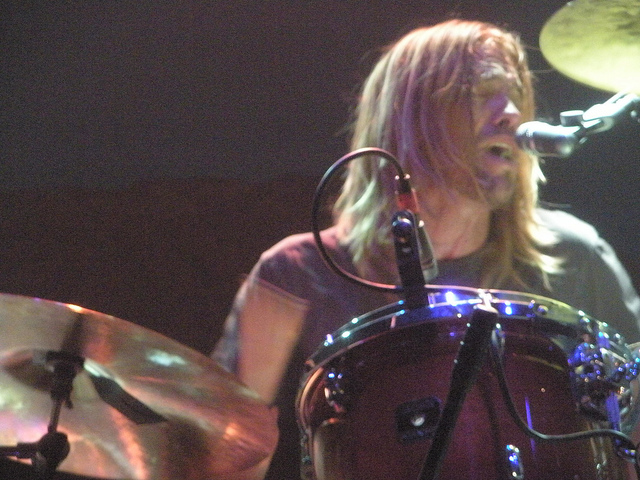 Taylor Hawkins on stage, May 6, 2010. Photograph by the author, sockii. See my full photoset from the concert at Flickr.

On May 6, 2010, Foo Fighters’ drummer Taylor Hawkins played The Gramercy Theatre in New York City, New York with his side-project band “Taylor Hawkins and the Coattail Riders.” This show was the second of Hawkins’ current tour that I’ve had the chance to see, the first being on May 4 at the Sonar in Baltimore, Maryland. Touring in support of his band’s second album, Red Light Fever, Hawkins once again provided a tight, energetic set of retro-rock ‘n roll in New York sure to delight his fans and hopefully win over some new ones in the crowd as well.

The Gramercy Theatre provided a very different venue for this show as compared to the Sonar earlier in the week. An old, converted movie theater, the Gramercy is a much larger room. According to my friend who had been to most dates on Taylor Hawkins’ current tour, it was the biggest room his band had played so far. My friend and I showed up quite early once again in order to secure a prime spot in the line to get inside. Queueing for a show can be a drag, but it always goes faster with good company, and another of our friends soon showed up to begin the line. Doors were to open at 7pm, but we were there by 4pm, and other fans didn’t start arriving until about 5:30. We saw the band members and crew come in and out of the venue several times during our wait, and managed to hear some of the soundcheck from outside. Already we could tell the sound here was likely to be better than it had been Tuesday night in Baltimore, where the room had been extremely boomy and loud.

Doors opened on time at 7pm, at which point all but one of our group of five friends had arrived to secure a nice spot right up against the barrier. Really the only time I’ll attempt getting to the front of a general admission show these days is when I’m with enough other people who can “hold the line” and keep interlopers out of our space, while providing coverage for necessary bathroom breaks and drink runs! Going by myself to shows, it’s usually too much of a hassle and I’ll just grab a balcony seat when possible. This night there were two opening acts on the bill. Singer James Maddock was the first, starting promptly at 8pm. His was a surprisingly enjoyable set, even if the music was fairly derivative of everyone from Rod Stewart to Bruce Springsteen. His bass player was highly amusing, striking random rockstar poses throughout the set, and the guitarist bore a freaky resemblance to Sting – something my friends and I found especially amusing as we are all big Police fans. Maddock played for about a half-hour to an enthusiastic response from the crowd.

The second act was a local trio whose name escaped me. Their sound was more heavy-metal/hard rock, rather in the vein of Black Sabbath. Not really my cup of tea but musically they were pretty solid, especially their drummer. Again, they got a half-hour to play and were off the stage by 9:15. By this point the room was getting fairly crowded and we were ready to go. Taylor came out with his bandmates Ganin, Chris Chaney and Nate Wood at just about 9:30.

They opened the set up with a rousing version of “Not Bad Luck,” the first track on Red Light Fever. The sound was indeed infinitely better than it had been Tuesday night in Baltimore, although I did find myself missing the intimacy of that venue. While in Baltimore we had literally been able to lean against the sound monitors and were just a few feet away from Taylor’s kit, here there was a whole security pit separating the floor from the stage, which was also more elevated. Of course, it still provided one with a much better chance to see Taylor’s drumming up close as compared to at a Foo Fighters arena gig, so I’m not going to complain too much. 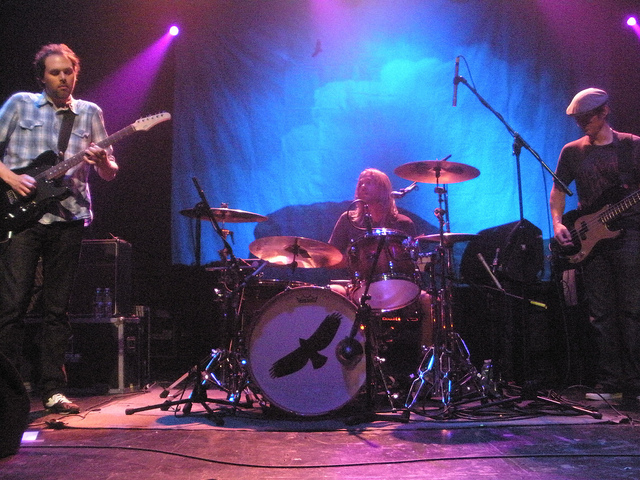 The Coattail Riders on stage, May 6 2010. Photograph by sockii.

The set seemed to be exactly the same as it had been on Tuesday night in Baltimore, with the exception of “Walking Away,” which was skipped. From the new album, we also heard “Your Shoes,” “Sunshine,” “Hole In My Shoe,” “Way Down,” “I Don’t Think I Trust You Anymore,” “It’s Over” and “Never Enough.” From Hawkins first solo album we heard “Running in Place,” “Louise,” “You Drive Me Insane,” and “Get Up I Wanna Get Down.” The set seemed to fly by; the band sounded tight and they played through it all with few interruptions or conversation breaks. Again, I rather missed those little breaks as compared with Baltimore, where Taylor was much more chatty about introducing the various songs and joking with the audience. Maybe it’s a “New York” thing; maybe the band was under tighter time pressure with the two opening acts here instead of one in Baltimore. The band were off the stage by about 10:40, even though the schedule I had seen posted by the bar for the night showed them playing from 9:30 to 11pm.

We hung out by the stage and chatted for a while although venue security were pushing hard to clear everyone out. Still, I hung on until I was able to score a setlist from one of the band’s roadies. He seemed to like my vintage Police t-shirt. We decided to move outside to try to catch the band, although I had my doubts we would be successful this evening. A show in a smaller city is a lot different from one in New York, and it seemed that there were a lot of guests of the band and New York City VIPs schmoozing and hanging around inside afterward. I guessed there had to be some kind of party or meet-and-greet for the “chosen few” inside, so the chance to more casually hang out and chat like we did in Baltimore would be less likely.

Still, most of our little group decided to hold out and give it a try until midnight, when we’d have to leave to catch our trains home. The band members started finally coming out of the Gramercy about 11:40. Nate dashed away quickly, but Ganin paused, recognizing some of our group from other nights on the tour and was happy to sign a few autographs and take a couple pictures. Taylor was out the door next. He seemed in a rush so we didn’t want to bother him for long, but I managed to get my set list autographed and take a photo of him with one of my friends. He seemed to be a bit of mixed minds about the quality of the show that night, commenting particularly that he had botched up “Way Down.” Well, you have got to give him credit for modesty!

All in all it was a good show, in some ways better than Baltimore, perhaps, but in other ways not as much fun for this fan. While the sound quality of the theater was excellent and I thought the band played tighter, I missed the much smaller room and more intimate experience of the Baltimore show. Besides that, I’m just never that much of a fan of the “New York scene” at concerts, where it often appears that more people are there to be seen than to actually see the act on stage. But maybe that’s my bias as a Philadelphian talking…

Still, I’m glad I had the chance to catch two shows on Taylor Hawkins’ current tour. In fact I would have loved to have caught more of the tour if possible, as I really enjoy the retro-vibe of his music and watching a talented drummer play is always a joy to me. Hopefully Hawkins will continue to record and tour with the Coattail Riders in the future. As much as I love the Foo Fighters, Taylor’s solo sound is actually more my kind of music, and seeing skilled musicians perform in smaller venues is always more fun than big stadium extravaganzas. 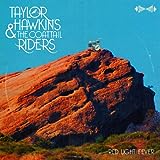 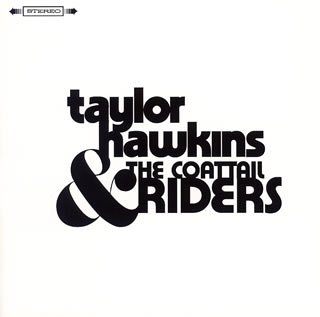