This review was originally published at the Yahoo! Contributors Network on April 21, 2010. 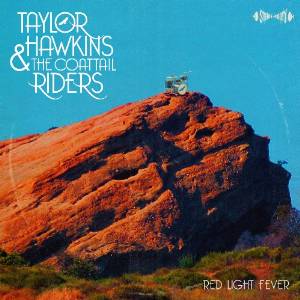 Red Light Fever by Taylor Hawkins and the Coattail Riders. Buy it now at Amazon.

In 2006, Foo Fighter’s drummer Taylor Hawkins released his first solo album with his side-project band, the self-titled “Taylor Hawkins & The Coattail Riders.” That album was a fun, rocking collection of songs which paid homage to many of his idols and influences including The Eagles, Genesis, Black Sabbath, Pink Floyd and The Police. Fans have had to wait four years for the Coattail Riders’ second album, the just-released “Red Light Fever.” Over a year in the making, the album features plentiful guest appearances such as Foo’s bandmate Dave Grohl and Queen’s Brian May and Roger Taylor. But was it worth the four-year wait? For this Taylor Hawkins fan, the answer is most definitely yes!

On “Red Light Fever”, Taylor wears his influences on his sleeve even more proudly than on the first Coattail Riders’ album. 70s Glam rock is the star of the show here, with many songs reminding this listener of everyone from Queen to The Sweet to T. Rex. “Not Bad Luck” starts the album off with a blast of serious 70s-style rock power, assisted by The Cars’ Elliott Easton. A romping, hard rock number, it begins by warning listeners not to “believe the writing on the wall” and features some fun vocal trickery, really bringing home a Queen-like sound.

Next up is “Your Shoes,” another glam-style rocker featuring Roger Taylor on background vocals. It’s a great, fast-paced number that should be plenty of fun to blast out of the car stereo speakers this summer. It’s followed by easily one of the album’s most memorable tracks, the swinging, catchy “Way Down.” This song will get stuck in your head and get your toes tapping from the first listen. I imagine will be a great live track during the Coattail Riders’ current tour.

The mood changes a bit with “It’s Over.” The intro recalls 70s prog-rock and metal with its complicated rhythms, crunchy guitars and intensely building speed before dropping into a steady, more pop-rock beat. It’s catchy, foot-stomping, and I have a feeling this is a song that will grow on me to be one of my long-term favorites on the album. Gannin does some great guitar work on this song as well. “Hell To Pay,” with its lovely guitar arpeggios and softer opening mood, is reminiscent of 70s Genesis before kicking into its heavier chorus. Taylor’s vocals are particularly good here. While some consider his vocals weak or rough, at his best he reminds me of an amalgam of Glen Frey and Don Henley, a perfect fit for the style of his music.

The album lags a little bit for me beginning with “Sunshine,” which sounds rather like a Foo Fighters album filler track or outtake than a Coattail Riders song. Much better is “Never Enough,” an Eagles-style slow rocker that starts out soft but builds to an insistent, driving climax. But the album falters again with “Hole In My Shoe,” which almost sounds like a parody of 70s rock in that it draws from too many disparate influences without gelling into anything solid. “James Gang” is another “filler-Foos”-style song that doesn’t do much for this listener.

“Don’t Have To Speak” takes the album from the 70s into the 80s, a power-ballad that makes you want to pull out your Zippo lighter and act like you’re at a White Snake or, heaven forbid, Winger concert. Saving it from total cheesiness is Brian May’s lovely guitar solo. “I Can See It Now” once more draws on the sound of the Foo Fighters, but more successfully than other tracks on this album. It’s light and peppy, and a song I could actually hear the Foos performing live – in fact I think I’d really like to hear that!

The album concludes with perhaps my favorite song, the driving and darker-toned “I Don’t Think I Trust You Anymore.” Again, Taylor’s vocal work on this track is good and the musicianship is solid and tight from all three band members, including guitarist Gannin and bassist Chris Chaney.

One thing I find interesting about this album is that, despite Taylor being a drummer (and a darn exceptional one at that), the drumming really seems to take a backseat on this album to the guitar work. The first Coattail Riders album featured perhaps more obvious drum-geekery for drumming aficionados to focus on, from the complexities of “Running In Place” to the dead-on Stewart Copeland-isms of “You Drive Me Insane”. But that Taylor doesn’t use his band to show off his drumming – or his ego – instead just solidly supporting the music is part of what makes me such a fan of his work. The Coattail Riders are not just about him as a drummer, but him as a musician within a band.

In conclusion, while “Red Light Fever” may not be a perfect album, it is highly enjoyable listening to this rock music fan. Anyone who appreciates the classic rock of the 70s should get a great deal of pleasure out of this loving tribute to the music of that time period. I’m looking forward to catching Taylor Hawkins and the Coattail Riders live on their current spring tour, and I recommend checking them out if you get a chance as well.