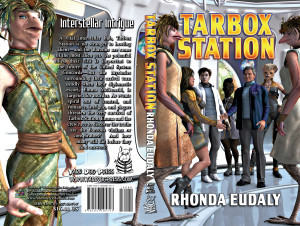 Situated at the intersection of four wormhole gates, Tarbox Station plays an important—and unique—part in the operations of the United System Concorde. Originally built by the Aren Empire as a military outpost, the station is now a commercial and convention hub that also houses USC Legionnaire Reserves. Tarbox is home to a large crew of aliens and humans, and visited by many others on a regular basis. One such visit involves a delegation of Barzons, a race of avian heritage and thereby one of the most unique to visit the station to date.

The Barzons are there as potential new allies to the USC, but their visit is troubled by what appears to be an assassination attempt made against their human diplomatic escort, Emma McDonald. But who is targeting Emma: the Barzons themselves, who seem unusually invested in her personal life, particularly any of her potential romantic relationships? Or could she perhaps be involved in staging a fake murder attempt herself as a way to get to Dr. Devon Ansley, the head of the station’s Medical Center who is working on a cure for a deadly alien plague? Ansley and McDonald’s budding romance may prove deadly for them both if the mysteries around the Barzons’ arrival are not solved.

Tarbox Station is the first solo novel by author Rhonda Eudaly, published this year by Yard Dog Press. It’s a solid mystery/space adventure, and if you are a fan of some of the great science fiction tv series of the 90s like Babylon 5 and Star Trek: Deep Space Nine, then you should find a lot to enjoy here. Indeed, this novel reads as though it could be the pilot for a brand new television series full of  intrigue, politics, and curious alien cultures. We are introduced to a large cast of characters, alien and human alike, as well as briefly told the history of these various races and sometimes their conflicts in the past.

Ms. Eudaly has a knack for writing engaging dialogue that keeps the action lively and moving forward. The characters’ conversations are often quite witty, in a way that doesn’t come across as forced as when some authors attempt humor. Here it comes about naturally, and the dialogue was certainly a highlight of the story for this reader. Emma and Devon’s banter as they first get to know each other is quite entertaining and I especially enjoyed the scenes featuring the station’s alien bartender Fareus. A member of the reptilian race known as the Krsites, Fareus is a keen observer of his customers as well as potential trouble. Think of G’Kar from Babylon 5 crossed with Quark from Deep Space Nine, and you’ll get a sense of what Fareus is like. I’d certainly enjoy learning more about him and his culture.

The main quibble I had with Tarbox Station as a whole was that I wanted the alien races to be, well, more alien. Most of them are humanoid not just in appearance but in demeanor, speech patterns,  apparent skills and abilities even with being descended from feline, avian or reptilian ancestors. I would have liked to have seen those different ancestry routes showcased more richly in the alien characters’ personalities and actions, which would have helped differentiate them from the human characters. In the early chapters of Tarbox Station when many different characters are introduced it’s a bit hard to keep track of who is who; who is alien and who is human, who fills what role on the station, which characters will be the main focus and which ones will be secondary.  We eventually learn a fair amount about the Barzons but not so much about the other races, like the feline Zicans or the dark-skinned Ysari. Interesting possibilities are opened up about the “Outer Realms” and the backstory of the Aren Empire, but not developed here—although that certainly leaves the door open for quite a few more stories set in this universe in the future.

All in all this is a solid first novel, a satisfying read for those who enjoy their science fiction with more than a touch of mystery and suspense. The “whodunit” at the center of the story is engaging and resolved in a way that ties up loose ends while still leaving plenty open for further stories and adventures. Which I do hope we see eventually, as Tarbox Station definitely has the potential to be the beginning of a thought-provoking ongoing book series.