This article was originally published at Associated Content on July 19, 2010. 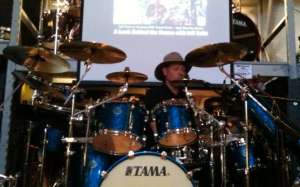 July 17, 2010 was “Tama Day” at Dale’s Drum Shop in Harrisburg, Pennsylvania. To celebrate the event, not only was the president of the U.S division of Tama Drums, Bill Reim, at Dale’s Drum Shop, but Jeff Seitz held a drum clinic and Q&A session. Jeff is most well-known for being Stewart Copeland‘s drum tech for over thirty years, however he is also an accomplished musician and engineer in his own right. Jeff shared many stories of working with Stewart both during his years with The Police and on film scoring projects. He also talked at length about his own experiences as a working musician and gave some fascinating demos on technique from behind the drum kit.

Jeff Seitz began his presentation to the full room of drum enthusiasts by talking about his early love and affinity for playing the drums. His mother was not always pleased with him banging on everything in sight (including her dining room table), but began playing drums in school where he impressed his teacher with his easy ability to pick up techniques. Jeff mentioned several key events such as watching American Bandstand and seeing his first live music concert that convinced him he wanted to be a musician. He went on to study music at the Juilliard School of Music, and worked as drummer for several different musicians before deciding he was ready for something else. Opportunity came knocking when a friend, Danny Quatrochi, approached him with the chance to be a roadie for a new band from England. They had lost one of their crew shortly after arriving in America for a tour and needed a drum tech. That band turned out to be The Police. (Danny, coincidentally, is still a technical assistant for Sting today.)

The Police’s drummer, Stewart Copeland, was impressed enough with Jeff Setiz’s professionalism and skills to invite him to come along with the band on their upcoming world tour. Jeff couldn’t pass up an opportunity like that, and it would be the beginning of a working relationship with Stewart which continues through to this day. Jeff would become more than just a drum tech, later assisting Stewart with engineering and mixing his film soundtrack work and albums such as The Rhythmatist. Jeff did not work with Stewart on the Oysterhead tour of 2001, but was part of the crew involved in The Police’s reunion world tour of 2007-2008.

During the clinic at Dale’s Drum Shop, Jeff shared many amusing stories of his years working with Stewart and The Police. Dale’s had a Tama prototype kit similar to the one Stewart had played when The Police first reunited at the Grammy awards on February 11, 2007. He used that kit for a demonstration of how Stewart created some of his trademark sounds using digital delay (originally tape delay) to build complex rhythms and echo effects. By setting delay triggers for different elements of the kit, such as the snare drum, octobans, or high-hat, Jeff could re-create trademark Copeland riffs from songs such as “Walking on the Moon,” “Can’t Stand Losing You,” and “Every Little Thing She Does is Magic.” He talked about the evolution of Stewart’s kit through the years, comparing the Tama Starclassic and Imperialstar kits he has used and why some were preferred for the studio and others for touring. He discussed drum tuning and how he would work and communicate with Stewart on stage during concerts, micing the drums for both recording and live performance, and many other technical details. 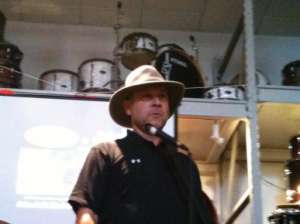 During the Q&A session, several questions were raised about The Police and the notorious, reported conflicts between Sting and Stewart Copeland. Jeff likened them to a pair brothers and noted that, if anything, there was actually more tension during the reunion tour than during the band’s original run. For so many years all three members of the band had become used to doing things “his way,” so going back to a band environment and having to compromise or be challenged by others was not easy. That said, the final summer leg of the tour in 2008 was the best part of it, Jeff said, as “the end was in sight” and everyone began to relax and just have fun. As to whether there might be another Police reunion tour someday in the future, Jeff was skeptical. He wouldn’t say it was impossible but did not see it as likely any time soon.

After the clinic, Jeff stayed for a long time to talk to those who had come to the clinic, pose for photos and sign autographs. He had more photographs and video with him from the reunion tour which he was happy to show and share with those who were curious. Myself and several friends in attendance had met Jeff during The Police reunion tour, so we all enjoyed the chance to catch up afterwards and hear more about what Jeff was working on now and possibly in the future. All in all it was a great event. I hope Tama Drums works with Jeff Seitz in the future to produce more clinics and appearances throughout the country. I left with a renewed passion for drumming myself, thanks to Jeff’s presentation and the great staff at Dale’s Drum Shop.