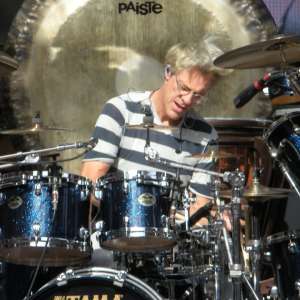 Stewart Copeland performing with The Police, 2008. Photo by sockii.

Fans of musician and composer Stewart Copeland, mark your calendars and clear your plans for Easter weekend in 2014. On April 19 he will be performing with the Virginia Arts Festival Orchestra at the world premier of his new work Orchestral Ben-Hur. The piece was commissioned by the Virginia Arts Festival and will feature this new musical score along with a 90-minute edited version of the classic 1925 silent film version of Ben-Hur.

Ben-Hur: A Tale of the Christ was originally written in 1880 by Lew Wallace, and has since been adapted to screen and stage numerous times. The famous story is considered perhaps the most important Christian book of the nineteenth century, with its tale of embracing Christianity in the firt century AD. While people today are most familiar with the 1959 film version starring Charleton Heston, the 1925 film is also quite remarkable and in fact was the most expensive film ever made in the silent era. Its chariot scene has been imitated many times—and in fact was almost shot-for-shot copied in the 1959 version!

Fans of high-paced action and original modern orchestral work should be sure to enjoy this unique combination of classic cinema and live music. Read on for more details about the project, ticket information, and the latest updates from the Virginia Arts Festival.

Several years ago, Stewart Copeland was involved in a highly unique live production entitled Ben Hur Live. He both composed the music for and narrated this show which featured extravagant set pieces including the famous sea battle, gladiator combat, and chariot race performed by live actors – and animals! The show was plagued with production problems, however, and many performance dates ended up being cancelled. The CD Music From Ben Hur Live featuring selections from Copeland’s score was only available at performances and indeed is now quite collectible.

In a recent release from Copeland’s management, he describes how he came to writing this new score to an edited version of the 1925 film. In part, he says:

“When the 2009 Ben-Hur Live arena production of the Lew Wallace novel finished its run in 2011 I felt strongly that the score I had composed for this project deserved a life of its own. I had seen Fred Niblo’s classic original version of this famous story and had been overwhelmed by its scale. Watching those same scenes that I had scored for a different medium, I couldn’t help but hear my music working with Ramon Novarro’s portrayal of Judah and Fred Niblo’s depiction of Lewis Wallace’s book. I felt that my new score would provide access for audiences to see the original masterpiece and to learn more about the various iterations of Ben-Hur, since it appears that many only know the Charlton Heston film.”

The performance will be held at Chrysler Hall in Norfolk, Virginia on April 19, 2014 at 8:00pm. Tickets are available at the Virginia Arts Festival Website, starting at $10 (students) to $60.

Can’t get to Virginia on Easter weekend? Don’t worry—there will be a second chance to see the show in Chicago on October 14, as part of the Chicago Symphony Orchestra’s films with live music series.

Featuring the music of Stewart Copeland

For those who have the cd or managed to see the live show, it will be interesting to see which elements from it are adapted into this new score to match the 1925 film.

CHECK PRICEBen-Hur (Four-Disc Collector’s Edition)
Available in both DVD and Blu-Ray formats. This deluxe edition of Ben-Hur features both the 1959 Charleton Heston film digitally remastered as well as the full 1925 silent film, with an orchestral score by composer Carl Davis. See it now at home, and then get ready to enjoy the live performance in 2014.

Video-philes will also love the many other additional features including:

Stewart Copeland: Much more than a rock drummer

Copeland is perhaps best known to many for being drummer with the rock band The Police. However in the years since the band split in the 80s, he has become a highly regarded composer of film scores, modern orchestral work, operas and even ballets. You can learn more about Stewart’s current and past projects on my other pages linked below:

Stewart Copeland – The Rhythmatist of The Police
Most people know Stewart Copeland as the drummer for the rock band The Police. But while his work with Sting and Andy Summers was some of his most popular, Stewart has had a long and interesting career since his years with that band. He has been involved w…

Stewart Copeland Soundtracks
Stewart Copeland may be most widely known as the drummer for the rock band The Police. But he has also developed a notable career as a prolific and much in- demand composer for film and television scores. Unfortunately many of those scores have never been…

Get the latest updates on scheduled performances, ticket sales and more