Review of the Major-label Debut by the Rock Star: Supernova Contestant

This review was originally published at the Yahoo! Contributors Network on August 30, 2010. 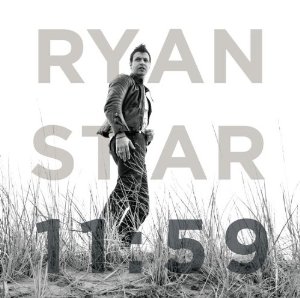 Long Island-based singer/songwriter Ryan Star has released his first solo, major label album, 11:59 in August 2010. Star achieved national attention in 2006 when he appeared as a contestant on the reality television series Rock Star: Supernova. There, he earned the nickname “The Darkhorse” for his moody, unpredictable performances of songs such as Phil Collins’ “In The Air Tonight” and R.E.M.’s “Losing My Religion.”

Although Ryan did not win the competition, he has continued to perform in the New York area, and as an opener for American Idol winner David Cook’s 2009 American tour. With 11:59, Ryan Star combines his strong narrative songwriting skills with the emotional, stripped vocals that have been winning him fans for years. While occasional pop cliches and bland production takes down the power of some of the tracks, 11:59 is still a recommendable debut record from an artist who now appears ready to become a true rock star.

11:59 is very loosely a “concept album,” at least according to Ryan Star’s own description of the record. Supposedly the album plays out in “real time,” and includes songs describing how Ryan’s “whole life has been building to this point”: the time, 11:59. I can’t say I found the narrative that cohesive or strong throughout the album, especially as several of the tracks had previously been recorded and released – albeit in slightly different versions – on Star’s 2006 independent album, Songs from the Eye of the Elephant. But concepts and themes aside, the important thing here is the music. Star is backed on many of the tracks by major-league session musicians including guitarist Phil X and drummer Matt Chamberlain. Most tracks are produced by Matt Serletic, who is tapped to work on David Cook’s second album. There is a very commercial, polished sheen to the tracks as a result, which is not always a good thing to this reviewer’s ears as it diminishes some of what has made Star’s work unique and memorable in the past.

11:59 opens with the catchy if not overwhelmingly exciting rocker, “Brand New Day.” This song has been used as the theme for TV’s “Lie To Me” and does have that simple, hooky power that works well for television – but it’s not the album’s best track and Star’s vocals are almost so bland as to be unrecognizable. “Right Now” follows, which is perhaps my least favorite track on the album. The song has an uplifting, positive message, but the lyrics are rather cliched compared to Star’s normal work, and the cheery “Go! Go! Go!” from the cheerleader backing vocalists are grating. It’s as though he’s trying to be the Long Island Bruce Springsteen, but fails with generic messages of how “I’m gonna run to the horizon/We are strong/We are young.”

Much better is “Last Train Home,” a beautiful power ballad that builds from a soft opening to an emotional climax. It showcases the range of Star’s vocals well and makes me think of the great – if slightly cheesy – ballads of the 1980s, such as Corey Hart’s “Never Surrender.” “Breathe” is next, which opens with a rather plodding slow-rock beat before launching into its bombastic chorus. The song feels a bit dated and unoriginal, again like an ’80s power ballad but not the kind that compels you to whip out your Zippo and sing along.

Things improve greatly in the next track. “We Might Fall” is one of the songs which had originally been on Songs From The Eye of the Elephant. Most tracks on that release featured bare instrumentation – typically just piano and Star’s vocals. “We Might Fall” benefits from the slightly more complex orchestration here while retaining its poignancy as a beautiful ballad about life and growing older. “Now that we are close to death/And close to finding truth/We might fall,” Star sings with intensity, in this song which reminds me in some ways of Peter Gabriel’s “Here Comes The Flood.”

“This Could Be The Year” opens with a ticking clock and maintains that sense of urgency throughout. It’s one of the strongest hard-rocking songs on the album, nicely orchestrated and with great guitar by session-star Rusty Anderson (who also appears on “Last Train Home” and the title track.) “Unbreak” is another power ballad of wanting to heal a lover’s pain. Star’s vocals are lovely, but the lyrics again suffer from cliches such as “Every dream that you lost/Every tear that it cost” and “I wish I knew you when/Eyes were wide and innocent.” Star can and has done much better; this track just fails to leave an impression.

“Start A Fire” is one of those better tracks, with a strong narrative and imagery about the power of lust and attraction. “I remember dancing on the hotel’s unmade bed” is one of my favorite lyrics, one of many in the song that speak of sex and desire without being crude or graphic.

“Losing Your Memory” is one of Star’s most moving ballads to date, here barely changed from the original stark arrangement on Songs From The Eye of The Elephant. One feels his heartbreak and loss as he sings of how “I would have lied/I would have loved you/All my life.” The title track, “11:59,” closes out the album, beginning over a softly strumming guitar and maintaining a slow-rock groove throughout. It’s a good album-ending track, summing up the messages Star has been sharing throughout the album.

The iTunes/Deluxe version of 11:59 features several bonus tracks. “You and Me” is first, a lovely ballad which I’m not sure why it wasn’t included over some of the lesser tracks chosen for the official release. Star’s vocals are restrained here but absolutely perfect for the tone of the song. “Gonna Make It Right” also starts out softly with acoustic guitar and understated keyboards, very reminiscent of his earlier work, another wonderful ballad which is truly what Ryan Star does best.

The last track on the Deluxe version of the album is “Back of Your Car.” It was the original composition which Star performed on Rock Star: Supernova and is another piece which gets a makeover here from Songs From the Eye of the Elephant. The version here suffers in comparison, however, and loses much of its urgency and darkness with this more generic rock arrangement.

Overall, 11:59 is a solid album, with several notable high points which negate most of the forgettable, generic-rock lows. Ryan Star impresses most when he does not let polished production overshadow the raw emotions and strength of his writing as it does at times here. Hopefully he can find, next time around, a balance between the rough originality of his previous work and the commercial sheen of we hear on 11:59. In the meantime I give this album a solid, if not overwhelming, recommendation to those looking for strong rock-oriented singer-songwriters, somewhat in the mold of American Idol veterans Chris Daughtry and David Cook.