‘Round About Midnight, released in 1957, but recorded in 1955 and 1956 respectively, was the first Columbia Records release from Miles Davis, and as you might expect, now a classic example of 50’s small group jazz. 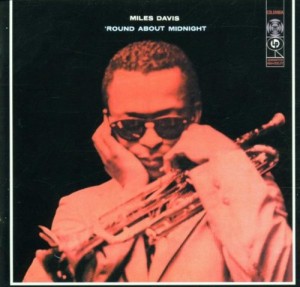 The album does seem like an overlooked classic compared to epics like Kind of Blue and Porgy & Bess. I think because it was recorded during the time period of the final Prestige sessions that included Cookin’, Workin’ and Relaxin, Round About Midnight gets over looked.

Round About Midnight also isn’t modal like Milestones and Kind of Blue, but oh how Miles can milk a ballad, The title track is just gorgeous, and maybe the definitive rendition.

Had Miles never recorded another album, his legacy as the best ballad player was etched in stone by this point. His use of space, and his ability to not waste a note was never more evident.

John Coltrane’s tenor saxophone is very interesting on the album as well, his sheets of sound style is right on the cusp of breaking out Coltrane still has plenty of that Dexter Gordon tone and phrasing going on, Ironically Dex would be influenced by Trane during the 60’s.

The music is so up beat, it lifts you up and inspires a positive mood. Pianist Red Garland sure plays a lot of block chords, I didn’t realize how much he sounds like Dave Brubeck in this regard, or maybe Brubeck like Garland? I may be overstating it, but the resemblance is there to my ears.

My favorite track is “Dear Old Stockholm”, music that sounds like the roots of post bop, it’s definitely not ordinary bop.

As I am listening to this original Columbia 6 eye mono copy, I am mesmerized at the walking Paul Chambers bass line on “Dear old Stockholm”, I promise you, there’s not one ounce of compression or brittleness in this recording.

All the warmth of the session just shines through on vinyl, how could anyone not like this music, ‘Round About Midnight might be the perfect “classic jazz” album, still rooted in the tradition, but not so modern yet.

Iconic album cover of Round About Midnight

The album cover? Well talk about an iconic shot of Davis, glorious black and white with a red hue. Columbia Records was creating a legend with careful marketing, but no one could have known just how big Miles was about to become, and the extent of which he would change music over the next 30 years.

If you are looking for a copy of the album like an original 6 eye label, you can still get nice play copies in the 25 dollar range, and brand new reissues for under $20. Almost all of Miles’ Columbia albums were such good sellers that supply is not an issue, even with the demand being somewhat high.