Roger Waters’ current production of The Wall is the concert tour not to be missed in 2010-2011.

This article was originally published at Associated Content/Yahoo! Contributors Network on October 6, 2010. 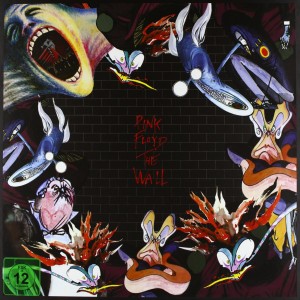 Roger Waters has triumphed at bringing Pink Floyd’s The Wall back to life, thirty years after the legendary concept album’s release and brief associated tour. Waters’ current presentation of The Wall Live came to Madison Square Garden in New York City on October 5, 2010, and it was a stunning production combining music, video, political statement and stadium extravaganza. This current production successfully manages to combine old and new by re-staging the original Wall show much as it had been done in 1980, yet updating it with incredible new digital graphics and visuals to relate the The Wall‘s story more powerfully to our modern times.

Thirty years have passed since The Wall was last performed live in the United States, in its entirety. The show was notoriously difficult to stage originally, incredibly expensive and relying on precise timing to build – and then destroy – an actual physical wall between the audience and the band through the set. Roger Waters, bassist and primary songwriter at the time for Pink Floyd, decided it was time to bring the show back to life as so much of the original story’s anti-war messages have even greater meaning today. He has also emphasized in the new production how media over-saturation can have a numbing, overwhelming effect on all of us – right from the start of the show, as snippets from movies and television series bombard the audience through the quadrophonic sound system as they take to their seats. For the new production of The Wall, original album illustrator and animator Gerald Scarfe has added new artwork and also redesigned the memorable stage puppets of Mother, the School Master, and The Wife. 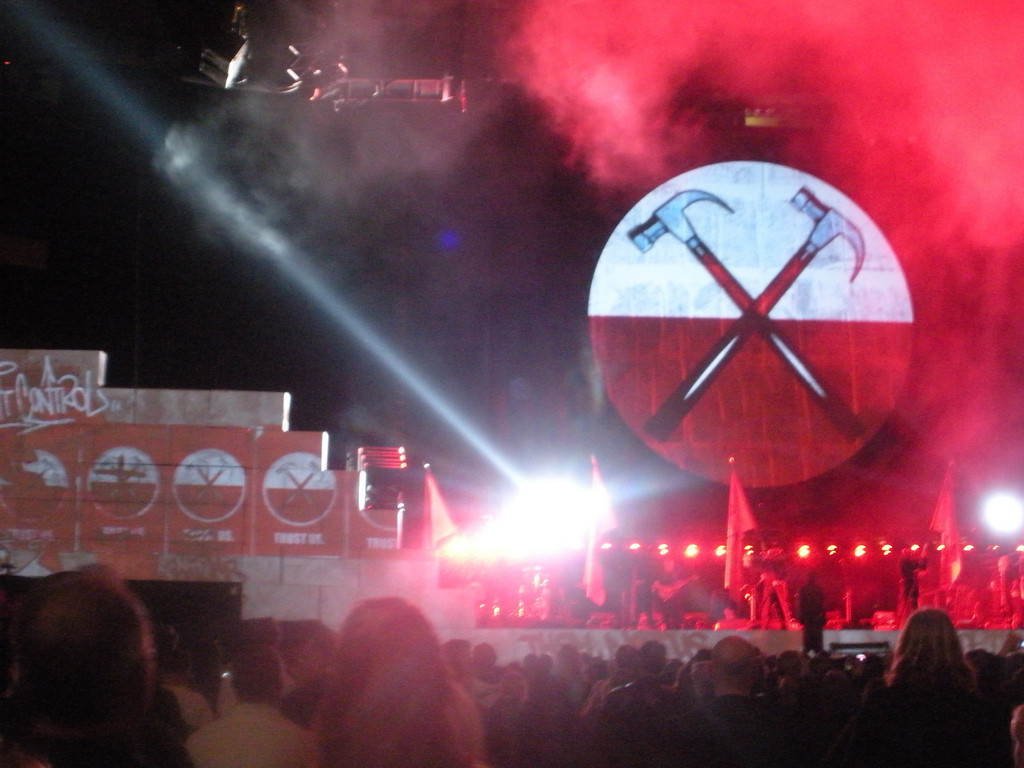 The Wall Live at Madison Square Garden, October 5 2010. Photo by the author, sockii.

The Wall Live is an assault to the senses from the opening notes of “In The Flesh?” Fireworks erupted from the stage as Roger Waters, donning his shades and coat as the character “Pink,” took the stage. As “The Thin Ice” began, photographs of “Fallen Loved Ones” (beginning with Waters’ own father, killed during World War II) were projected one by one onto the bricks of the slowly growing wall in front of the band. Waters had been accepting photographs through his website for months leading up to the concert tour from those who had lost loved ones in war and conflict. It was a compelling statement, showing everyone from European World War I soldiers to Iraqi civilians to New York City firemen killed on 9/11. This lead into the “Another Brick In The Wall” suite, some of the most immediately familiar music from The Wall and also the appearance of the first larger than life puppet on stage, that of the School Master. Waters and his band were joined on stage at Madison Square Garden for “Another Brick In The Wall, Part 2” by a group of children from The Boys’ Club of New York. Combined, they admonished the School Master to “leave those kids alone” until the puppet floated back up above the stage.

“Mother” continued the set, after Roger finally made a few brief words of thanks to the crowd for coming to the show. It was a clever staging of this soft, largely acoustic number, where Waters performed it as a “duet” with a recording of himself from 1980 at Earls Court in London. While grainy, black-and-white video of a younger Waters was projected on the growing wall, a scowling Mother puppet watched from high above the stage.

Scarfe’s powerful animation, both new and old, took the forefront during the following numbers: “Goodbye Blue Sky,” “Empty Spaces,” and “What Shall We Do Now?” All were tightly performed by Waters’ band, which include veteran Pink Floyd touring guitarist Snowy White and keyboardist Jon Carin. 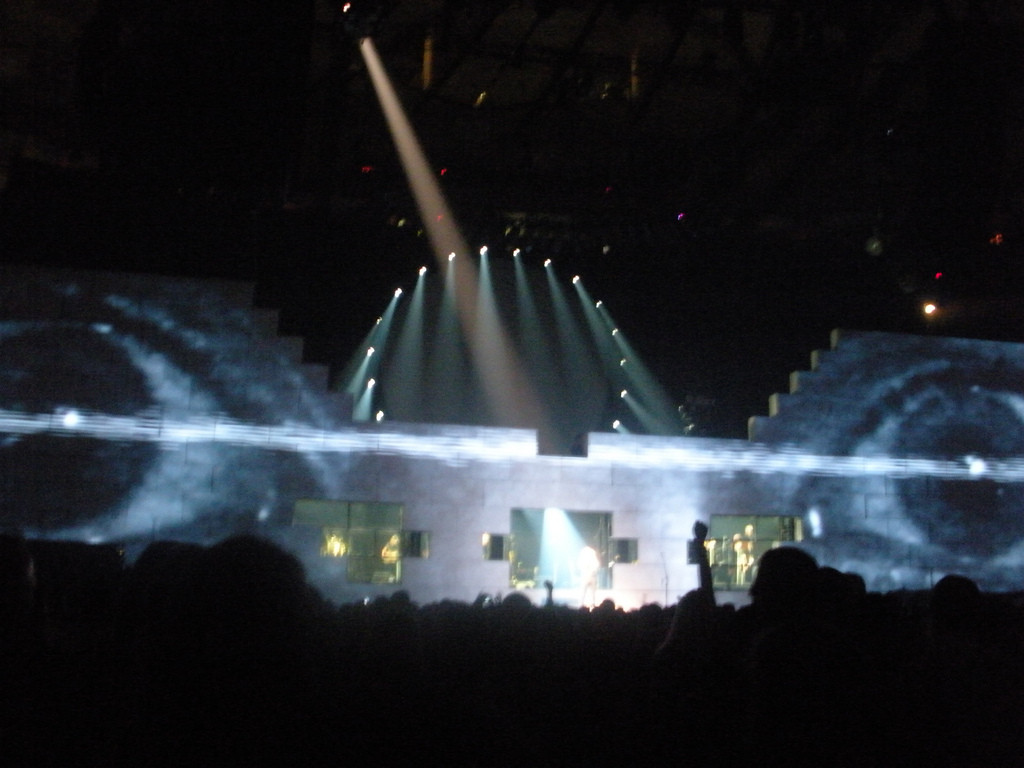 The Wall Live at Madison Square Garden, October 5 2010. Photograph by the author, sockii.

“Young Lust” rocked the crowd, accompanied by some very adult yet well-suited video of scantily-clad young women. The rest of the first half of the show took a darker tone, as the famous phone call at the end of “Young Lust” led into “One Of My Turns” and then the pleading “Don’t Leave Me Now.” Waters’ vocals here were incredible, capturing the desperation and pain of betrayal beautifully as the praying mantis-inspired Wife puppet descended from the left-hand side of the stage. The wall on stage now nearly complete, the set finished up with “Another Brick In The Wall, Part 3” and “Goodbye Cruel World,” which Waters sang while peering out through the last missing brick, sealed on his final “goodbye” to the crowd.

After a brief intermission, the second half of The Wall began with “Hey You.” The band performed this song entirely behind the now complete wall on stage, giving the audience nothing to see except that divider between them and the musicians. Waters’ original intent to emphasize the disconnect between the band and the audience at a rock concert was powerfully made by this immense physical barricade. It also brought home the personal message of isolation and sorrow of the song, of trying to reach out to another but “the wall was too high, as you can see.” The soft and sorrowful “Is There Anybody Out There?” was followed by long-time crowd favorite “Nobody Home.” For this number, Waters appeared in a hotel-room set which unfolded from a section of the wall. Staring at a TV under the neon glow of hotel signs, he sang the number from a lounge chair, acting out the lyrics and getting one of the strongest audience reactions of the night.

After this highly personal, introspective section, the focus turned back to war as Waters asked the audience “Does anybody here remember Vera Lynn?” Lynn was a British singer who grew to fame during World War II for her song “We’ll Meet Again,” and throughout the song “Vera” Waters showed emotional footage of soldiers being reunited with their family members.

After this somber message, a military drum cadence announced the stirring “Bring The Boys Back Home.” Waters sang before projections of war and devastation, imploring all not to “leave the children on their own” while a quote from Dwight D. Eisenhower was projected over the scenes of carnage: “Every gun that is made, every warship launched, every rocket fired, signifies, in the final sense, a theft from those who hunger and are not fed, those who are cold and not clothed.”

Waters, still alone before the wall, then began “Comfortably Numb,” also one of The Wall‘s most legendary songs. Snowy White and Dave Kilminster did admirable jobs of recreating David Gilmour’s classic guitar solos from this song from perches high atop the wall. In a stunning moment of digital graphics, Waters “struck” the Wall at one point during the song, setting off what appeared to be a shockwave of tumbling bricks, only to have them rebuild themselves anew. The graphics continued to be impressive through the following numbers as Pink’s “Surrogate Band” moved to the front of the stage. “The Show Must Go On,” they insisted, before the explosive return of “In The Flesh.” Waters announced here that “Pink isn’t well, he stayed back at the hotel,” before launching into a verbal assault on the audience. In his drug-induced state from “Comfortably Numb,” Pink at this point imagines himself as a fascist dictator, not a rock star, and urges the audience to show their support for him by targeting any “undesirables” in the crowd. 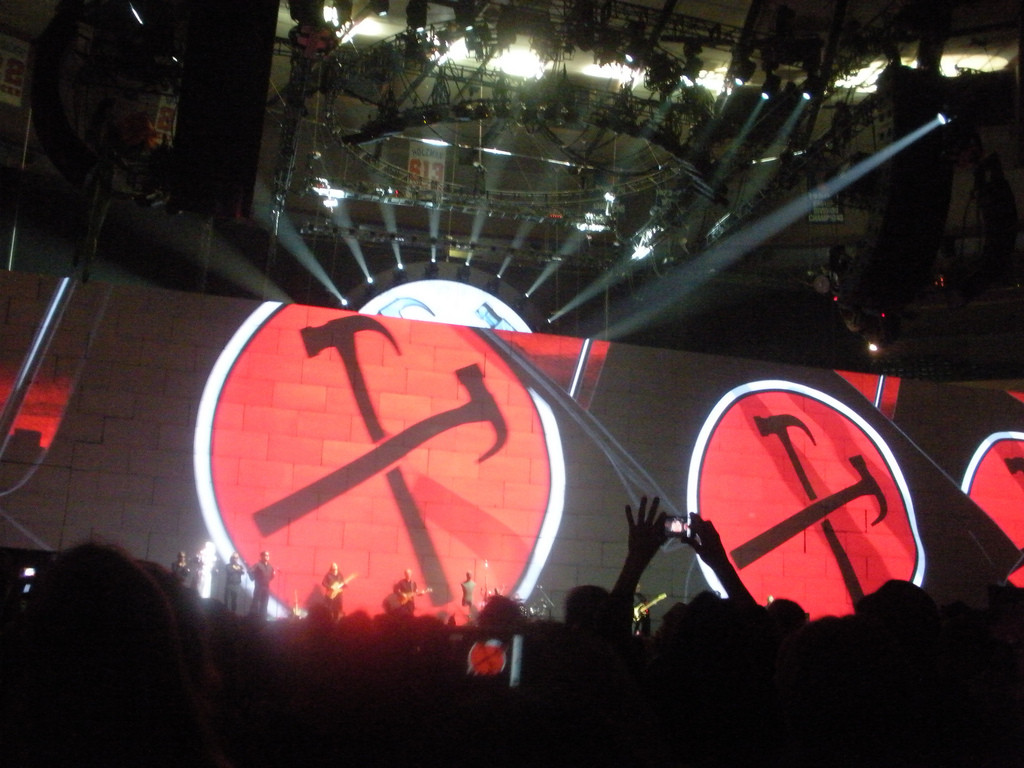 The Wall Live at Madison Square Garden, October 5 2010. Photograph by the author, sockii.

“Run Like Hell” followed, always one of Pink Floyd’s most rocking numbers and here performed incredibly well by Waters’ band. The visual effects at this point were amazing, and recalled Floyd’s 1977 album Animals strongly through the new graphics of pigs, dogs and sheep – and a new flying pig! After this dizzying assault on the senses, the pace slowed for the sullen stomp of “Waiting For The Worms,” which again combined new computer animation with Gerald Scarfe’s famous marching hammers.

“Stop!” Pink finally cried, leading in to the final large production number of the show, “The Trial.” Here, Waters sang in character as prosecutor, school master, wife, mother and judge, as Pink is on trial (mentally) for the crime of “showing feelings” and wishing to interact with others in a human way. Eventually the judge orders Pink to “Tear down the wall!” and as this chant continues, the bricks on stage began to tumble and fall in a display that left the audience cheering. For the final song, the band appeared amidst the ruins for “Outside The Wall.” Red confetti fell over the audience during this quiet acoustic number, which ended with the observation that “it’s not easy/Banging your heart against some mad bugger’s wall.”

Overall, The Wall Live was one of the most powerful, incredible rock concerts I have ever seen in my life. A near lifetime fan of Pink Floyd as well as Roger Waters’ solo work, I was too young to see the original live production of The Wall so it was a treat to finally see one of my favorite albums brought to the stage. One of the strengths of The Wall has always been how it works on many different levels – as a criticism of war and violence, a statement against crowd frenzy at rock concerts and the rock star life, an examination of madness and the importance of love and compassion for our fellow man. Roger Waters has successfully illustrated all of these themes through this new live production, and in fact has convinced me that The Wall is an album that must be seen live to be fully appreciated. Acoustically, The Wall Live was also easily the best sounding rock concert I have ever attended. The state of the art sound system used on this show allowed every instrument, every note, every word to be clearly heard, and indeed made me turn around several times as sound effects and vocals sometimes seemed to be coming at the audience from all angles.

Tickets are not inexpensive to The Wall Live, ranging from $75 to $250. That said, I thought the tickets were worth every penny I spent for the unique nature of the experience – enough so that I have tickets to two more productions of The Wall Live this November. Roger Waters’ The Wall Live tour will continue through the United States and Europe into the Summer of 2011 and is easily a “must see” show for music lovers worldwide.