A Retrospective of the November 8, 9 and 11, 2010 Performances at the Wells Fargo Center in Philadelphia, Pennsylvania.

This article was originally published at Associated Content/Yahoo! Contributors Network on November 14, 2010. 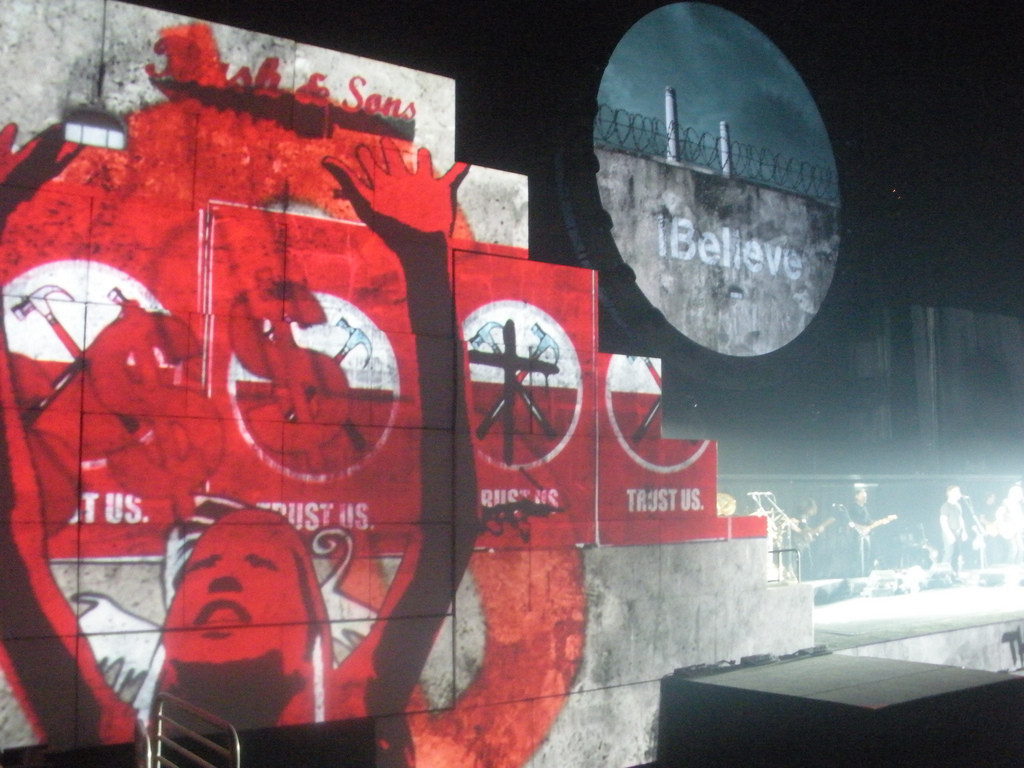 Roger Waters performing The Wall on November 11, 2010. Photograph by the author, sockii.

On November 8, 9 and 11, 2010, Roger Waters brought his triumphant 30th anniversary tour of Pink Floyd’s The Wall to the Wells Fargo Center in Philadelphia, Pennsylvania. Previously I wrote about the specifics of the show and the updated staging of The Wall in my review of the Madison Square Garden performance on October 5, 2010. In Philadelphia, the production was even more spectacular, as the band has become tighter and Waters’ enthusiasm for the work and interaction with the crowd has continued to build. The Wall Live is clearly the concert event of the year and a show not to be missed, as it now continues on to a series of Southern and West Coast dates before heading to Europe in 2011. It is such a complex and powerful show that seeing it multiple times is almost mandatory, so that one can fully appreciate not just the staging and visual effects but the overall musicianship and Waters’ emotional performance.

The Wall Live, much like a theatrical musical or opera, does not vary night to night in set list nor production. However, each evening’s performance still can have a very different vibe depending on the crowd’s enthusiasm and reactions. While for each night in Philadelphia the Wells Fargo Center was close to or completely sold out, the energy in the arena only grew throughout the week, reaching its peak on Thursday evening for the final performance.

On Monday night, Roger Waters’ first night in Philadelphia for the tour, he spent some time talking about the city’s importance to him and The Wall itself. He told the story of how an incident with a “local quack” doctor in the 1970s, brought in to treat him for the flu before a show at the Spectrum next door, was the inspiration for one of The Wall‘s centerpiece songs, “Comfortably Numb.” Sadly the Spectrum is scheduled to be demolished in the near future, making his tribute to the legendary venue even more memorable to audience members that evening. On all three nights Waters talked of Philadelphia “always being a great music town” and remembered first playing the city with Pink Floyd at The Electric Factory – which is still around today, albeit not the same theater that it once was.

The Wells Fargo Center is quite a different venue from The Electric Factory in either its original or current state, with over 20,000 people in attendance each night of the show. The Center is also, normally, a terrible venue for rock concerts from an auditory standpoint. Sound is typically extremely muddy and boomy at the Center, yet somehow Roger Waters’ sound engineers made the venue sound amazing on all three nights, wherever my seats were located. With over 170 speakers utilized, the sound came at the audience from every angle and corner of the arena. Each instrument and every vocal shone through whether one was seated in the front of the floor, on the side, or in the back. 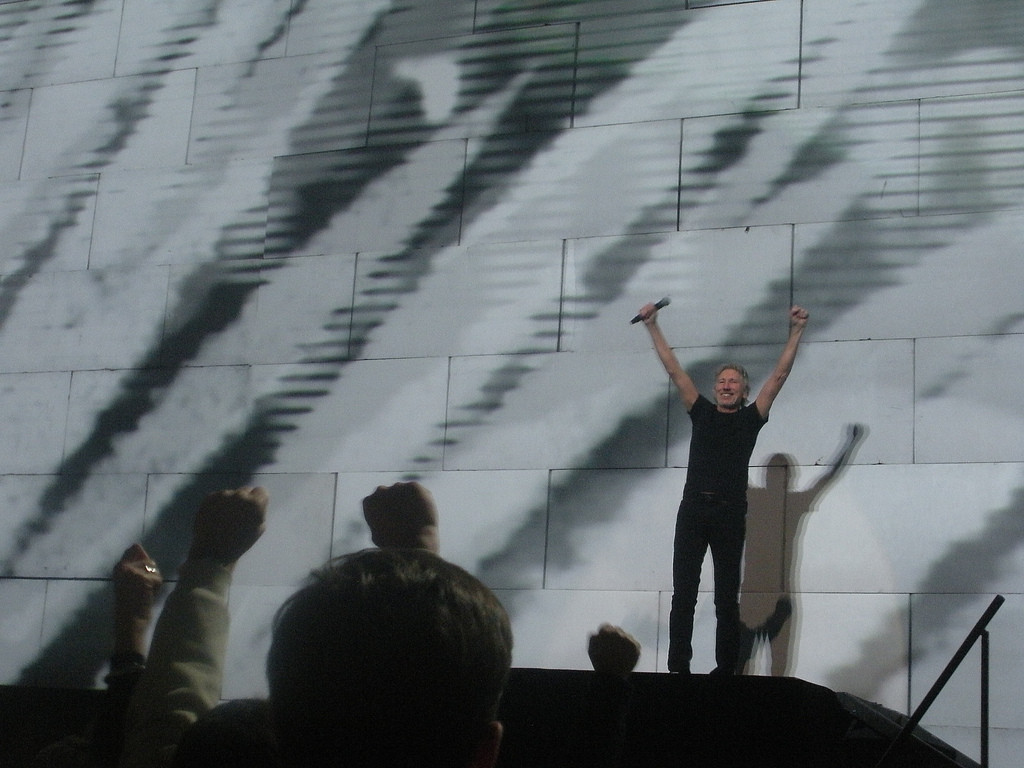 Roger Waters performing The Wall on November 8, 2010. Photograph by the author, sockii.

Monday night I was fortunate enough to be sitting in the 5th row on the left side of the floor. This location was perfect for truly appreciating Roger’s performance and the emotion he puts into these songs. He plays to the full house yet also directly engages those in the front of the floor and to the sides of the stage, especially in pieces such as “Nobody Home,” “Comfortably Numb,” and “Outside The Wall.” Sitting so close, however, one misses some of the overall impact of the visual projections onto The Wall as it is built, and without looking backwards one can miss the giant inflatable pig which floats over the audience during “In The Flesh” and “Run Like Hell.” Yet when the Wall is torn down at the end of the show, the impact that close is breathtaking – one truly feels as though the bricks are about to fall on top of you.

On Tuesday night, my seats were on the right side of the floor in the 14th row, a better vantage point for getting to experience more of the Wall projections and animations. One could hear how tight the band was that evening, particularly in such numbers as “Run Like Hell” and “Another Brick in the Wall, Part 2.” For “Another Brick,” Waters has a different group of school children on stage with him to dance and sing in every city. Monday night, half-way through the song, Roger noticed one particular child in the Philadelphia group who was enthusiastically “air-guitaring” along with Dave Kilminster’s solo. For each performance after Monday, he went right up to her and jammed along, clearly enjoying her enthusiasm as much as the kids were loving the chance to be a part of the show. 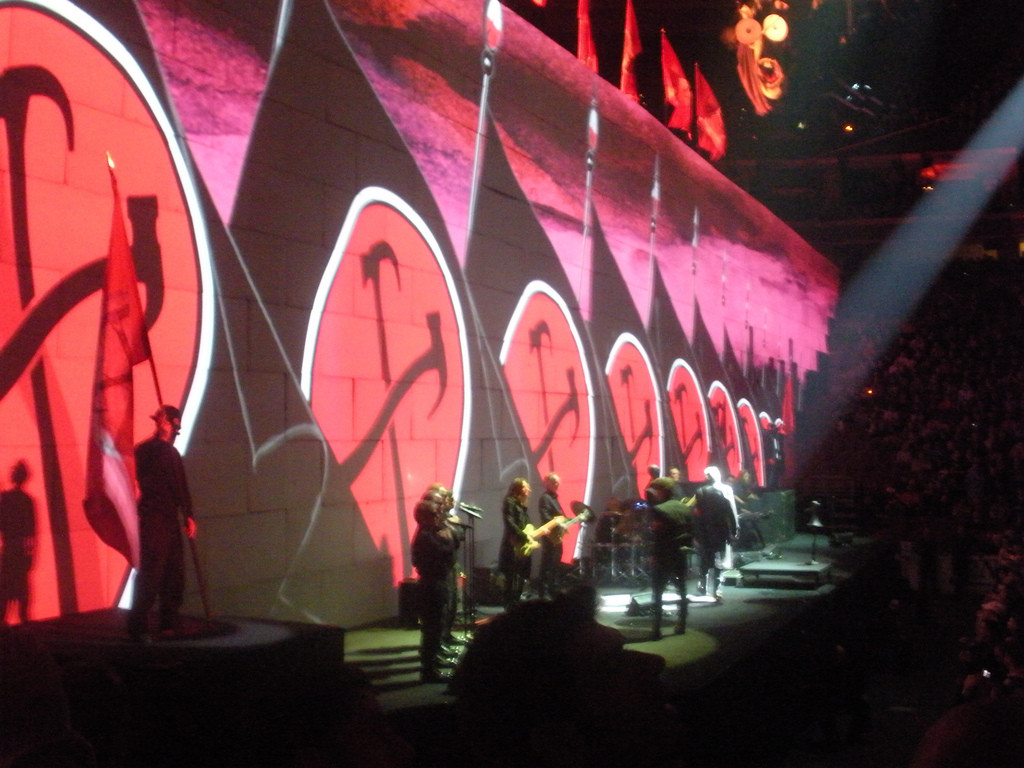 Roger Waters performing The Wall on November 11, 2010. Photograph by the author, sockii.

For Thursday night, a last-minute ticket purchase landed me a seat 9 rows up, directly in line with front row of the left side of the floor. This “side-view” spot was ideal for watching the band as the Wall was being built, and provided a perfectly clear view of Roger Waters himself. Waters again performed heavily for those of us sitting in that section, and was right beside us for “Nobody Home,” when the mock hotel room set descends from The Wall for the number. Despite being at an angle it was also an excellent location to take in the entire visual production as well as the crowd throughout the arena. Thursday was also Veterans’ Day, which brought a special magnitude to the performances of “Vera” and “Bring The Boys Back Home.” Waters was thoroughly into his portrayal of the tortured “Pink” that evening, searching for an escape from The Wall in “Comfortably Numb” and hamming it up as the imagined dictator for “In The Flesh” through “Waiting For The Worms.” At the end of the night, Roger Waters gave special thanks to Philadelphia for the three nights of their enthusiasm, and we could only give thanks in return for three nights of spectacular music and experience.

“As spectacle, [The Wall] is peerless in this concert season, or any in recent memory, for that matter. The sheer scale of the production…and the sheer enormity of the wall itself – matches the outsized thematic scope of the piece, which is to say everything that’s been going on in the world during the first bloody, awful decade of the 21st century. Everyone should see it once before they die.”

His words are not the slightest bit of an exaggeration in my opinion. As a veteran concert-goer who has followed many bands and artists enthusiastically for decades, no show has come even close to Roger Waters’ The Wall Live. Some Pink Floyd fans have bemoaned it could not be as good as the original 1980-1981 Wall tour, without the presence of former bandmates David Gilmour, Nick Mason, and the late Richard Wright. Yet in their absence, Roger Waters has put together the best band possible to recreate the original sound of the music, playing tribute to the others’ contributions beautifully while still keeping it fresh and far from a staid “nostalgia show.” Waters himself is in top form on this tour, better than I had seen him on either the 1999-2002 In The Flesh tour and the 2006-2008 Dark Side of the Moon Live tour. The visual production is breathtaking, the sound incredible, and the entire experience one which transports the audience fully into the world of The Wall for two magical hours.

I’ve seen the show four times now and can only hope that perhaps, next year, Roger Waters will bring The Wall Live back to the United States one more time. That said, I have nothing but the most sincere thanks to give Waters for bringing The Wall back to life for as many shows as he has. Whether you consider yourself a major “Floydian” or not, do not miss this show if you have any opportunity to go see it – this is truly a once-in-a-lifetime musical event.