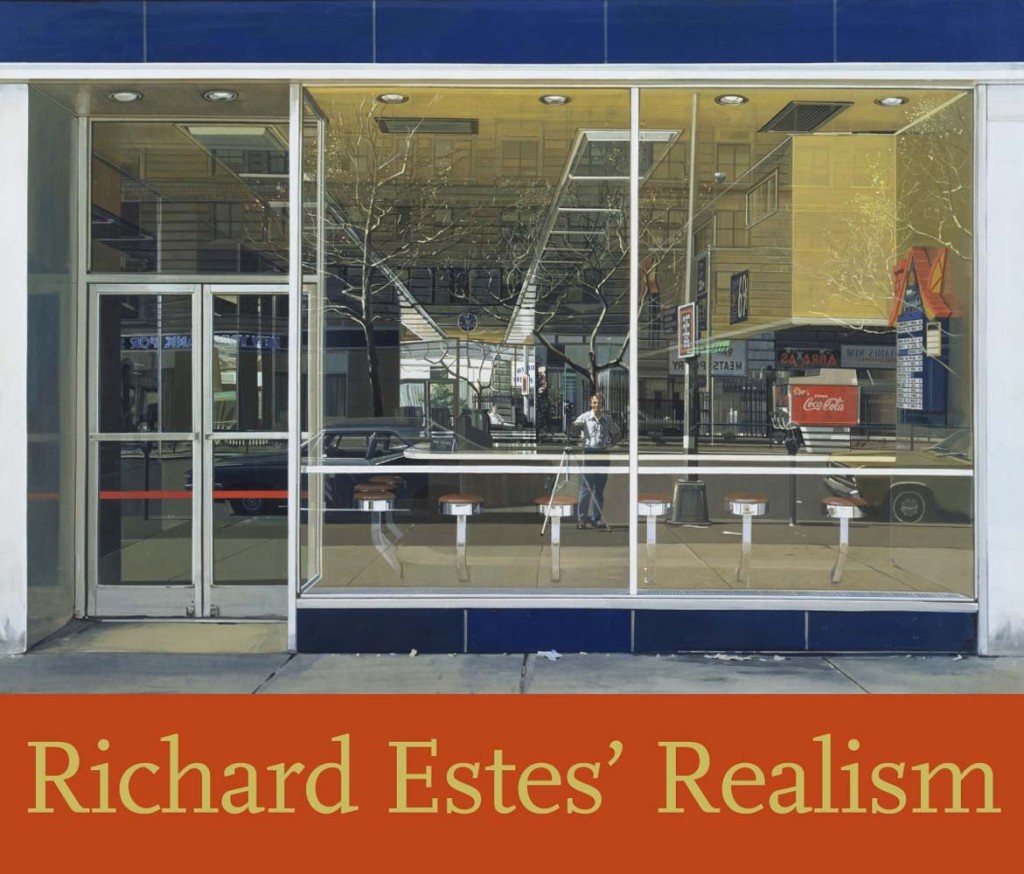 “Richard Estes’ Realism”, published 2014. Notice how the author and his camera is visible in this artwork, reflected in the glass window. Available for purchase from Amazon.

The Museum of Arts and Design in New York City is currently running an outstanding exhibit of original works by Richard Estes, one of the foremost photorealist artists of the 20th and 21st centuries. The exhibit, entitled “Richard Estes: Painting New York City” features a collection of original oil paintings and woodblock prints by the artist, covering his career from the 1960s through works completed just this past year. Also on display are some of the photographs Estes took as references in building his work, which is helpful in showing how he uses them not simply to replicate images precisely but to create a unique yet instantly recognizable vision of the city.

Estes developed his unique photorealist painting technique after studying fine arts at The School of the Art Institute of Chicago. He was less interested in the abstract style of painting much in vogue at the time and instead took inspiration from the work of realist painters of the past such as Edward Hopper and Thomas Eakins. After completing his studies he moved to New York City, where he worked as a graphic artist doing illustration work  for magazines and advertising agencies. Clearly these experiences also contributed to the development of his personal, artistic style: the crisp lines and attention to precise detail, his way of capturing signage and lettering and how these “advertising” images are all around us in city spaces.

Reflections in glass, water and other surfaces would become an important element in his paintings, as evident in one of his early, fully realized paintings in the photo-realist style: Bus with Reflection of the Flatiron Building, which is on display in this current exhibit. A single figure is seen looking out a window on the bus, his face reflected twice on the car in the foreground of the painting: in the car window and the car hood. Yet the figure is far less important to the image and composition as a whole compared to the inanimate car and bus, the reflection of the tall building rendered in exquisite yet distorted detail.

Estes prefers to work only from his own photographs when composing his work, using his camera as a “sketch pad”, in a sense, taking multiple photographs as reference in creating a final image in his painting. In works like 1991’s The Plaza, the same figure on the bus is actually painted twice in different poses and angles,  something not immediately noticeable but once seen it adds a surrealistic element to the work. This fact is important to keep in mind in viewing his work, and understanding how it is not simply an act of reproducing a photograph.  Estes uses photographs as a tool but not a crutch; to view his work is to take one into a kind of “hyper reality” which may be immediately recognizable from the world around us but in an amplified manner. We are invited to look closely at the world around us and view it perhaps as we never have taken the time to do so before.

Estes’ work also recalls—and could be seen as a successor to—the incredible Venetian cityscapes of the great Italian landscape painter Canaletto. Like Canaletto, Estes gives us a record of a city as it has evolved and changed through the years, and celebrates its buildings and architecture.  And seeing the World Trade Center in the landscape of so many of his pre-2001 works now seems an eerie reminder of the the September 11th tragedy which so affected the city of New York.

Seeing Estes’ paintings in person for the first time was a tremendous treat for me, as I have been an admirer of his work for many years. Most of these paintings are quite large in scale—larger than I thought them to be. Approaching some of them, like the Hotel Empire, can create almost a feeling of vertigo and dizziness.  It is also interesting to see several unfinished works in the exhibit, which help reveal Estes’ painting methods and techniques.

I was less interested in the portion of the exhibit devoted to Estes’ prints. While attractive, to me they lack the color and depth of his oil paintings which make them so fascinating in the first place. Overall, however, this exhibit is a wonderful showcase of the artist’s work and a must-see for anyone who loves New York City or perhaps wishes to understand the impact that photorealistic art can have. If you’ve ever seen a photorealistic painting and wondered, “Why not just take a photograph?”, then you may find the answer here in Richard Estes’ incredible paintings.

Richard Estes: Painting New York City runs at the Museum of Arts and Design from March 10 2015 – September 20 2015. See the museum’s website for location, hours and other information to plan your visit.