Her stripped bare arrangements of these songs work much better on some tracks than others.

This review originally was published at Associated Content on November 2, 2010. 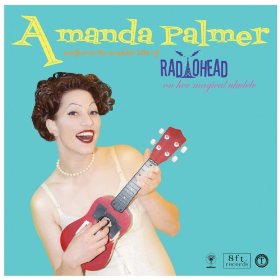 Amanda Palmer Performs the Popular Hits of Radiohead on Her Magical Ukulele. Available at Amazon.

While the eternally-busy Amanda Palmer is about to head out on a 10th Anniversary Reunion Tour with Brian Viglione of The Dresden Dolls, this past summer she released a unique EP of Radiohead cover songs. Entitled Amanda Palmer Performs The Popular Hits of Radiohead On Her Magical Ukulele, the EP features seven tracks written and originally recorded by the popular alternative rock band, reinterpreted by Palmer – primarily accompanied by ukulele and piano. Given that Palmer is selling this digital album directly through her website, for a suggested minimum “donation” of only 84 cents, it certainly seemed worth the price to give it a listen. The collection is definitely a fun novelty for fans of either Amanda Palmer or Radiohead, with some of the covers working much better and encouraging repeat listening than others.

Radiohead is not an easy band to cover as their sound is so distinct, in large part due to Thom Yorke’s unique vocals. Some of their songs, when stripped bare of their original complex arrangements and his singing, can come across as too simplistic and monotonous. The first selection on Amanda Palmer Performs The Popular Hits of Radiohead On Her Magical Ukulele, “Fake Plastic Trees,” is such a case, and it is also easily the weakest track on the EP. At over five minutes in length, the simple ukulele accompaniment to Palmer’s vocals here becomes droning and quickly boring once the novelty wears off. The repeated lyric of how “it wears her/him/me out” could apply to the listener by the end of this uninspiring cover version.

Better is the more light and delicate interpretation of “High and Dry,” which features both subtle piano and ukulele from Palmer under her breathy vocals. The song’s original, mostly strummed guitar instrumentation is easily to replace here with ukulele. As a cover, it’s not a particularly daring reinterpretation, but it is a pleasant listen. “No Surprises,” always one of my favorite Radiohead tracks, is suitably morose and Palmer sings it beautifully, working hard to make the song her own instead of simply imitating Thom Yorke’s original vocals. Chiming, high-pitched toy-piano adds to the piano and ukulele arrangement on this track perfectly, although again, it’s not much of a stretch from the original, just one that is more stripped down and bare.

“Idioteque” is a more risky track to take on, and Amanda Palmer does quite an admirable job reinterpreting it without the eletronica and driving percussive rhythms of the original. Multitracked vocals capture more of the complexity of the song, nicely creating an eeire, moody atmosphere.

Although the ukulele is the title instrument of this EP, the best cover version in fact actually features no ukulele at all, but piano, violin and cello instead. With “Exit Music (For A Film),” Amanda Palmer finally treats listeners to a cover version that genuinely succeeds not just as a novelty but as a true reinterpretation. Perhaps that success is because this cover is closest in sound to the dark cabaret genre which brought Palmer such success with the Dresden Dolls and her solo album Who Killed Amanda Palmer. She sings here with tremendous passion and power, putting anger and pain into the vocals to an extent far beyond the original.

Radiohead’s most well-known song, “Creep,” is included in two live versions on this EP. The first, subtitled “Hungover at Soundcheck in Berlin,” is the better of the two. The raw sound in the echoing, empty theater brings home the despondency of the song nicely. Palmer gives the song a light, swaying beat on both versions, and the simple ukulele musical backing to her singing is amusing and clever. Neither are major revelations or reworkings of this song which many Radiohead fans are sick to death of already by this point. I’m not sure why it merited two versions on the EP.

Overall, Amanda Palmer Performs The Popular Hits of Radiohead On Her Magical Ukulele makes for reasonably satisfying listening for fans of the singer and her work, and will probably amuse at least some Radiohead fans who enjoy different versions of their favorite band’s songs. It’s not likely to win over new fans to either, nor be considered a major work in Palmer’s discography in years to come. But given the low price of the download, I do recommend it to those who enjoy cover songs as well as supporting independent musicians. 84 cents is less than it costs to download a single track from iTunes, and here the money is going directly to the artist herself.

For enthusiasts, related products are available at higher prices in Amanda’s webstore, including an LP version with clever, retro-styled album art, several themed t-shirts, and even a special package for $1,000 including an iPhone, on which Amanda will call you personally and perform the “Ukulelehead” song of your choice.

* “Amanda Palmer Performs The Popular Hits of Radiohead On Her Magical Ukulele” – AmandaPalmer.Net.

* Amanda Palmer Performs the Popular Hits of Radiohead on Her Magical Ukulele – Wikipedia.