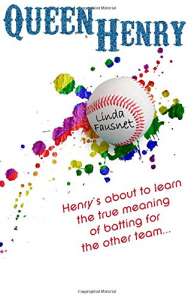 Queen Henry by Linda Fausnet. Available in print and Kindle editions at Amazon.

What if a pill could change a person’s sexuality?

That’s the question at the heart of Queen Henry, the delightful debut novel by author Linda Fausnet. It’s also the question plaguing the novel’s protagonist, Baltimore Orioles star player Henry Vaughn, Jr. Henry is a good natured guy, a fan-favorite known for his flamboyant on the field persona. He’s also a bit of a ladies man, not someone who ever thinks about homosexuality except to react in dismay and disgust when rumors start circulating that one of his team members might be gay.

Henry does have a secret he is keeping, however: he suffers from asthma and is afraid of having an attack on the field that could make him appear vulnerable and weak. So he agrees to take part in a clinical trial for a pill that promises to keep his asthma symptoms at bay for a month at a time. Sounds great—until Henry discovers the pill seems to have caused a very unexpected side effect. He suddenly feels no attraction for women at all and is noticing how hot some of the other men on his team really are…

Henry is horrified by his sudden change in sexuality and needs answers. Only he’s not likely to get many of them, or any support whatsoever for his “woke up gay” claim, from the research assistant in charge of the drug trial, Sam. Henry already insulted Sam terribly in their first meeting with his unease over Sam’s open homosexuality. Indeed, Sam thinks it’s all in Henry’s head, and that he must have simply been denying his true sexuality all these years—he’s just using the drug as an excuse.

To try to get rid of Henry, Sam introduces him to Thomas, a friend who is known for helping others coming to terms with their sexuality and stepping out of the closet. Sam doesn’t expect Henry to start falling for Thomas, nor for Thomas to develop strong feelings for Henry in return.

Queen Henry maintains a lighthearted tone throughout the book, even as I could easily see the premise of a sexuality-changing drug as the basis of a much darker, more serious dystopian work (in fact I’m sure such has already been written, I just can’t think of a title off the top of my head.) But Henry’s struggles with understanding his feelings are made very real and sympathetic. At first he’s scared and terrified, sure it has to be the pill to blame. But as he spends time with Thomas, Sam and their other friends in the gay community, he begins to question his own past and feelings: could the pill have just allowed him to see past his own anxieties to discover repressed feelings? He does seem to have certain preferences and tastes that are stereotypically gay, such as a love for musical theater and “girly drinks” like Peach Schnapps. And if his feelings now are real, how can he cope with being gay in the incredibly homophobic world of Major League baseball?

In many ways Queen Henry doesn’t read—nor does it end—like the typical gay romance novels out there today. I think that’s why I found it overall such a pleasant surprise. The relationship between Henry and Thomas is in turns sweet and very sexy. Their romance is well-developed in a believable fashion (for a fantastical novel), and while there are some steamy passages they are tastefully written, erotic without falling into romance novel cliches or being crude. The supporting characters add a richness to the novel as well, from Henry’s various team members to Alice the bartender, Henry’s confidant in his troubles and his one steady girl friend (not girlfriend).

At times I did feel like the characterizations got a little off the mark, a little slash-fiction overly romanticized and feminized.  But overall the writing is engaging with a good sense for scenes and surroundings, just enough to set the stage without getting overly bogged down in tedious detail. In fact I could rather see Queen Henry turned into a romantic-comedy film or tv series, parts of it were so delightful and painted such clear cinematic pictures in my head while I was reading. (In fact, now that I check the author’s website, apparently Fausnet has written numerous screenplays in various genres before and Queen Henry started as a screenplay… That certainly explains a lot!)

Some will likely love the ending—and the resolution to the question of Henry’s sexuality. Others will no doubt be disappointed. I won’t give it away because you should read the book for yourself to decide. I will say it definitely gave me a lot to think about in the way it raised issues of what love really means, whether sexuality is determined by birth or by choice, confronting our own prejudices and what it truly means to be an ally.

It’s also worth mentioning that all proceeds net of taxes from the sales of Queen Henry will go to the Harvey Milk Foundation. So if you needed any other reasons to give this book a try, know that it will help support a great cause.

I look forward to reading more of Fausnet’s work in the future and hope that they’re as much of a “home run” as Queen Henry.