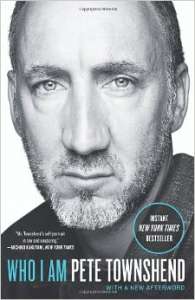 “Who I Am” by Pete Townshend. Buy it now at Amazon.

Who is Pete Townshend?

That is the question the famous rocker purports to answer in his 2012 autobiography, Who I Am. With a musical career now encompassing more than five decades as both guitarist/primary songwriter of The Who and as a successful solo artist, Pete Townshend should have plenty of tales to fill a large book – or perhaps even a dozen of them!

But is Who I Am a worthwhile read, not just for diehard fans of The Who but for those interested in general rock music history? Does the book provide insight into the life of an undeniably brilliant artist who battled addictions, relationship difficulties, possible sexual abuse as a child, lost two of his bandmates to early death and then faced child pornography charges himself in the last decade?

The answer – at least in this fan’s opinion – is decidedly mixed. While I learned a fair amount about Pete and The Who from reading this book, there is much left unanswered, as well as frustrations in the way the book is presented and written.

I came to The Who’s music at a time in my life when I’m sure their songs strike a chord with many. It was during my later high school years when I felt disconnected from my fellow school mates and peers, uncertain of my future, and struggling to claim my own identity outside of a somewhat tumultuous family life. Music was my release, my escape, my “best friend” throughout those years, and I had developing a special fondness for several “classic rock” bands and artists: Pink Floyd and Roger Waters, early Genesis, Warren Zevon…and then of course The Who.

I first was exposed seriously to The Who’s music via a radio broadcast of Tommy being performed at Radio City Music Hall in 1989. From there I purchased a copy of Quadrophenia on cassette and I was hooked; songs like “The Real Me”,  “Is It in My Head?” and “Cut My Hair” spoke to me on a level I truly “couldn’t explain” to others – especially not my parents! (Indeed, The Who was the first band I liked which my mother absolutely hated, and up to this point we actually shared very close musical interests and tastes.) 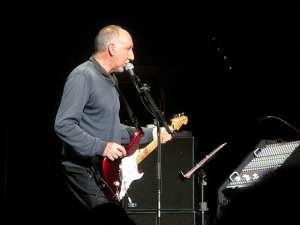 Pete Townshend on stage, October 26, 2008. Photograph by the author, sockii.

During college I continued to build my collection of Who and Pete Townshend music, many albums of which I still listen to frequently today. I have been fortunate to see The Who in concert four times (twice while the great John Entwhistle was still alive), and also Pete Townshend once in a solo performance at a benefit concert in New York. I’ve read several books about the band published by others, including Tony Fletcher’s excellent Keith Moon biography Moon: The Life and Death of a Rock Legend.

So with my long history of appreciation for The Who, and especially Townshend’s incredible songs and lyrics, I was very excited to read his autobiography when it was released. I wanted to know more about the person who had written these songs which were such a part of my teenage years and beyond; I wanted to hear his personal take on The Who’s history and his relationships with his bandmates. But Who I Am didn’t answer the questions I had so much as frustrate me with the details Townshend felt more important to include.

I have to say that Who I Am was a difficult book for me to get through (it took me over two months to finish), as much as I had looked forward to reading it and hoped to learn more about one of my lifelong musical heroes. I felt that Pete devoted far too much time to thoroughly uninteresting (to anyone but himself) topics such as his many boat and real estate transactions, his legal/financial wranglings with Who management, and endless plans for re-staging and re-interpreting works such as Tommy.  As much as he talks early on about not having any idea of the money the band was making for years, he later seems quite cavalier in tossing around worries about not making enough on tour to keep up his lifestyle, chartering planes to dash back and forth around the world (and between his family and girlfriends), trading up his yachts for bigger ones and other matters which are rather difficult for the “average fan” to relate to.

In contrast, many of his musical projects – both solo and with The Who – are quickly glossed over or not discussed in the depth I was looking forward to learning about. Who’s Next seems almost dismissed after his lengthy (and honestly somewhat ludicrous) ideas for the “Lifehouse” project. We learn the stories behind some of his songs – mostly the ones about women he was obsessed with or slept with – but little about others. Particularly frustrating is the coldness and distance with which he discusses his bandmates, beyond recounting certain well-known stories of Keith Moon’s wild antics, John Entwhistle’s mastery of the bass and Roger Daltrey’s vocal skills and straightforward manner. There’s very little feeling of camaraderie revealed, nor discussion of creative issues (or differences) that might have taken place in studio. Very often it feels as though Townshend sees and has treated his bandmates as little more than session players to interpret and perform his music.

Of course, I also came to wonder if the manner in which certain topics are glossed over and not discussed in the book by Townshend is due to the fact he spent so much of his life battling alcohol addiction and abusing drugs. It’s perhaps a miracle he remembers as much as he does… 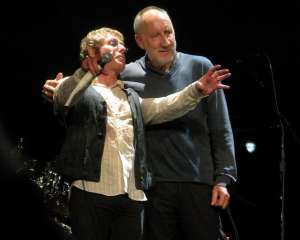 Roger Daltrey and Pete Townshend on stage, October 26, 2008. Photograph by the author, sockii.

When it comes to his personal life and struggles, Townshend writes a great deal about the difficulties of his childhood – particularly of being sent to live with his grandmother, where he may have been the victim of sexual abuse. Hints at and about these times appear sprinkled throughout the book, leading up to (and perhaps attempting to explain/show his innocence regarding) the allegations that he himself had paid for and downloaded child pornography which caused quite a scandal and controversy in 2003. He discusses how he had been attempting to investigate, in his own admittedly foolish way, how banks were taking money and participating in child victimization transactions online and that’s what led a computer trail to his home. At the time of the allegations, Townshend explains in the book, he chose to accept a police caution instead of taking the matter to court because the entire affair had been so draining and disruptive already. “I wish now that I had gone to trial,” Pete says in the book, “but perhaps that is a foolhardy notion. Instead, I have relied on my friends and the general public to speak for me – until now.”

Overall, Who I Am was not the book I was hoping for nor expecting from Pete Townshend. While I did learn some things I didn’t know previously about Pete and The Who, they weren’t necessarily the kinds of things I was most interested in learning about, nor especially revealing about their music. Indeed, I would have to say that I think Townshend is a much more brilliant lyricist and songwriter than an author of engaging prose; in his lyrics he seems able to take his personal experiences and translate them into more universal and relatable stories and expressions. In Who I Am, Townshend wallows too deep in pretentious navel-gazing and manages to alienate the reader – or at least, he managed to alienate this reader rather considerably. And while there are a few interesting stories shared about other musicians and artists such as The Rolling Stones, Pink Floyd, Jimi Hendrix and Eric Clapton, these little tidbits are few and far between in the 500+ pages of Who I Am. So I can only give the book a very cautious recommendation to the most dedicated Who/Townshend fans who want to know everything they can about their favorite band and artist – but at the end of the day, they might not be all that happy with what they end up learning.