All About the Supergroup Featuring Les Claypool, Trey Anastasio and Stewart Copeland 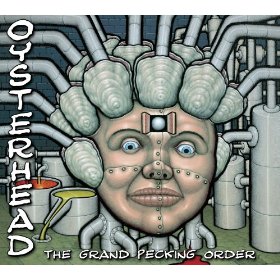 “The Grand Pecking Order” by Oysterhead. Available at Amazon.

Oysterhead is the curious musical supergroup composed of three very different artists and personalities: guitarist Trey Anastasio (best known for his work with Phish), bassist Les Claypool (of Primus), and drummer Stewart Copeland (The Police, Animal Logic, and other bands). Combining the jam-band trippiness of Phish, the funky hard-hitting and often humorous style of Primus, and the sophisticated pop-rock sounds of The Police, Oysterhead were a combo which no one expected could quite work – and some still debate whether in fact they did or not. Although their last and to date only studio album was released in 2001, the group has always left open the possibility of recording and touring again, which is something for which many fans still hope.

When Les Claypool first called Stewart Copeland about performing together, the drummer had stopped actively playing the kit while instead pursuing a career as a film score composer. According to Copeland, Claypool told him: “You’ve got to get playing them drums again. It’s your responsibility. You shouldn’t be not playing those drums.” Claypool was scheduled to perform at a one-off gig at New Orleans’ Saenger Thater in May 2000 and was looking to put together a special group for the event. He had his guitarist, Trey Anastasio, and wanted to recruit Copeland for the gig as he had long been a fan of The Police’s drummer. Copeland agreed, and Oysterhead was born.

Oysterhead’s first performance took place on May 4, 2000. The show was part of the New Orleans Jazz & Heritage Festival and Oysterhead’s two-and-a-half hour set consisted of a mixture of original songs (many of whose lyrics were composed at the last minute backstage), long instrumentals reminiscent of Pink Floyd’s early ’70s stage jams, and curious cover selections ranging from The Animals’ “The House of the Rising Sun” to Led Zeppelin’s “The Immigrant Song.”

The performance was admittedly a bit of a “trainwreck,” according to the band, but Stewart Copeland says he later listened to the live recordings – downloaded off the internet – and edited them together into a more cohesive recording. He then sent his edited tape off to Trey and Les in order to convince them that perhaps their new band should actually do something more in the future, given the seeds of something great had been revealed in this one performance.

In 2001, Oysterhead reformed to record and release an album entitled The Grand Pecking Order, which featured several new tracks along with the ones performed originally in New Orleans. The album was recorded at Trey’s studio in Vermont and is a unique auditory blend of extreme instrumental proficiency, offbeat humor and sound effects, and bizarre lyrics. The album peaked at only number 41 on the Billboard 200 Chart, but has remained a favorite among many alternative and classic rock fans for its strange blend of the three very different musicians’ sounds and personalities. Songs like “Wield the Spade” and “Pseudo Suicide” were never going to be Top 40 radio hits, but they provided ample room for jamming and experimenting on stage, which was where the band was truly at home.

Copeland, never one to shrink away from stirring up a little controversy, angered some Police fans by his comments at the time of the album’s release along the lines of “[Expletive] the Police!” He was extremely excited by the Oysterhead project, crediting Les and Trey for reawakening his passion for playing the drums. In their live cover version of the reggae song “The Israelites,” Trey would even change one of the lyrics to sing, “I don’t want to end up like Andy and Sting.”

Oysterhead then and now

A brief North American tour followed the release of Oysterhead’s album in the fall of 2001, where the band played to sold out audiences across the country, largely consisting of Phish devotees. After the 2001 tour – which did see a few schedule changes due to the September 11th attacks – the trio went their separate ways and have yet to record together again. They claim this lack of new material is more from the difficulty of coordinating their individual schedules than for any other reason. Each member of the band has consistently kept busy with varied solo projects, reunion tours with their other groups, and numerous musical works.

Stewart Copeland always has stated he believed Oysterhead would “come down from the mountain” every few years do to something new, and 2006 proved him to be correct. On June 16, 2006, Oysterhead reunited to perform a two-hour set at the Bonnaroo Music Festival in Manchester, Tennessee. No new material was performed at this show, but the set was well received by fans. The future of the band five years later, as always, remains to be seen.