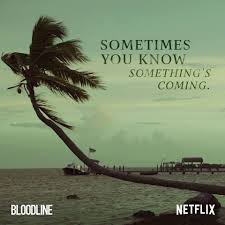 With the backdrop of the Florida Keyes, it shouldn’t take much to create a story worth watching. Netflix original series Bloodline has turned out to be more than worthy of the visual effects.

Sissy Spacek, Sam Shepard and Kyle Chandler lead an incredibly talented cast into the deep dark secrets of what appears to be a perfect family. Pillars of the community, the Rayburn family has run a successful private resort, welcoming visitors to their tropical paradise for decades.

The story begins on a weekend as the family prepares to celebrate the wedding anniversary of Robert and Sally Rayburn, played by the amazing Sam Shepard and Sissy Spacek. The family is also about to be honored by the city, with the naming of a pier. Everyone is preparing for the events and the return of the oldest of the four siblings, Danny.

A quick glimpse of the siblings gives us John, Kevin and Meg, the three children who have stayed close to home. Although staying close to home hasn’t exactly grown them into perfect people.

But Danny is the outcast, the one who ran away for reasons only he seems to know, at first. His return starts out rocky; he gets off the bus before it makes it to his stop where his brother John is waiting for him. Danny doesn’t get on a return bus right away. He ends up running into an old friend who quickly gets him involved in something he shouldn’t be involved in.

When Danny does show up to the party, he brings with him an uneasiness that he shares with his father and siblings. The ick factor is thick and Danny, played perfectly by Ben Mendelsohn, spreads it around easily, ruffling feathers as soon as he arrives.

Small glimpses of past struggles are immediate between the siblings and we see John as the mediator of the family. John does his best to get his older brother Danny to understand how things are now, and his younger siblings to not play the games Danny keeps trying to drag them into.

As the local Sheriff, John becomes involved investigating the circumstances surrounding two bodies that have been discovered in the marshes. Badly burned, the victims are identified as women who were being illegally trafficked into the country.

The biggest conflict we discover is between the senior Rayburn, Robert and his oldest son Danny. We feel the tension as speeches are made during the dinner celebration, we know there is so much more written on Danny’s notes and the tension doesn’t go away with the canned laughter.

But we also see the relationship between Danny and John as two brothers who shared a strong bond at one time. We know they were close, we know something happened to drive them apart. And now that Danny has decided that he’d like to come back home and be a part of the family business again, John does his best to welcome his brother home.

And then Robert Rayburn, the patriarch of the family suffers a stroke. Danny is involved and his siblings quickly accuse him of foul play.

With every scene, we’re given a little more insight into what haunts this family. Just as you think you’ve figured out what the trouble is, something darker comes along.