I am not someone who believes in everything  he sees on TV (or online). I am fully aware that the producers of a TV series carefully select what they want you to see, etc… so this is why I was actually surprised that I could use a tip from Hell’s Kitchen to improve my cooking skills. And this was not even a tip given to the public, it was more something Gordon Ramsay said again and again to the candidates which out of a sudden popped up in my mind and I realized I could use it to improve my cooking skills.

Before I go further, let me start from the beginning. As I explained in another post, I don’t like to follow TV series when they are aired because I am too afraid I would miss an episode or have to cancel appointments, etc… just not to miss it. Recently, I got the season 7 and 8 of Hell’s Kitchen. Thinking about it, I should have bought the complete seasons 1-8 box set as it would have been a better deal. 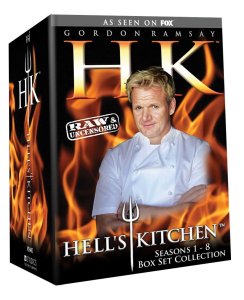 Buy it now at Amazon

Anyway, watching 2 seasons of this TV series in a short time frame will made me aware that one of the most common mistakes these chefs make is that they don’t quality-check enough the food they produce (or which is given to them, in the case of the final four – cf substitutions by sous-chef Scott, etc…). Actually, it is easy to spot when you see it on the screen, but recently, I was cooking for my family and realized that I didn’t taste my food either!

It is even ironic that it took me 2 seasons to remember chef Gordon Ramsay’s tip: “taste your food”. Despite being simple, this has helped me a lot since I started doing it! Once, I was ready to serve some pork that was undercooked (it looked nice to me). As I tasted it, I noticed it and simply kept it under the heat. Another time, my chicken was bland. I had put some spices, had it marinated with some mixture so I was sure it would be nice. And yet, I tasted it and it was really bland. Well, another point for this tip. I just added some more spices, seasoned it better and my wife and son enjoyed it!

So, if you want to improve your cooking skills, I would recommend you to use this tip or even to watch the show. Maybe there will be something else that will mark your mind and help you become a better chef!

I am French, living in Norway and I like to watch movies and TV series from the USA, as well as from other countries. I am currently watching "The Apprentice" and some old James Bond movies.