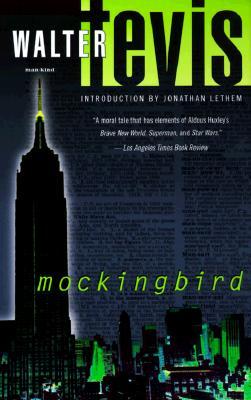 “Mockingbird” by Walter Tevis. Available in print and Kindle editions at Amazon.

In the 25th century, a robot wanders through the streets of a decaying New York City as mankind grows ever nearer to extinction. Those humans still alive exist in a state of near constant numbness and isolation, trained from youth to favor self-interests and internal thoughts over interpersonal relationships and all but the most trivial conversation. Narcotics dull the mind, “quick sex is best”, and there is no sense of the future or the past; just working menial tasks and indulging in meaningless pleasures and sustenance. For some the meaningless of it all is becoming too much, leading to increasingly frequent group suicides. And with no babies being born, it appears the last generation of humanity is simply counting out time until they cease to exist entirely.

Meanwhile, one who wishes to die the most simply cannot due to his programming: that wandering robot, who goes by the name Robert Spofforth. He believes himself to be the last of the “Make Nine” robots in existence, the most advanced and human-like ever created. But unlike the other Make Nines who have all now destroyed themselves, Spofforth must live on to serve humanity until humanity is no more. He cannot kill himself no matter how much he wishes to.

One day Spofforth, who serves as Dean of what’s left of New York University, learns of a professor in Ohio named Paul who has somehow taught himself the lost art of reading. Spofforth summons Paul to New York to translate the title screens of ancient silent movies, since not even Spofforth possesses the ability to read. In fact reading is a criminal activity, and an even worse crime is teaching that knowledge to others.

While in New York, Paul comes across a strange woman named Mary Lou living at the zoo. Mary Lou has “dropped out” of society yet somehow avoids Detection by the robots that are supposed to maintain order and enforce proper behavior. Paul begins to teach Mary Lou to read and together they start to question and challenge the laws of society as it now exists. But eventually Spofforth separates them and Paul is sentenced to prison far from New York for his crimes (including cohabitation with another for over a week’s time). Mockingbird follows each of their stories, as they struggle to come to terms with their fates and what it means to truly be alive.

“It all began, I suppose, with learning to build fires—to warm the cave and keep the predators out. And it ended with time-release Valium.”

Mockingbird is without question the most incredible, thought-provoking work of fiction I have read in years. While dystopian science fiction is all the rage today (particularly in the Young Adult field), this book—first published in 1980—blows all of them away in its power and troubling warning about our potential future. You cannot read this book without turning a critical eye toward the way our modern technological society seems to value cheap, instant entertainment and gratification over real life relationships, hard work and culture. How we tend to isolate ourselves behind computer screens to talk via social media instead of face-to-face. How increasingly we are encouraged to take drugs and medication to “take the edge off” and deal with pain and emotion instead of confronting difficult situations. Mockingbird takes these troubling realities to an extreme, perhaps, showing a future where humans go through life in a state of drug-induced near catatonia because that’s all they can bear, where television programs consist of little but extreme violent sex and rape because we have become numb to anything less prurient. But it’s an extreme vision that I do not find completely unbelievable based on what I see of the world today.

Walter Tevis is perhaps best known for his three most popular novels, each of which have been adapted into highly regarded films: The Hustler, The Color of Money, and The Man Who Fell to Earth.  Tevis was apparently inspired to write Mockingbird while he was teaching English literature at Ohio University in the 1970s, and observed literacy in the student body dropping at an alarming rate. The importance and power of reading is certainly a central message in the novel, although illiteracy is not necessarily shown here (in my opinion) as the sole reason for the downfall of mankind. There have been wars over oil, we learn, and an increasing dependence upon robots to work and think such that we don’t have to.

The three central characters of Mockingbird are each given their own narratives in book and each is compelling in its own way, although Paul is clearly the main character who we follow the most closely. Paul’s journey from New York to prison to then trekking along the East Coast (with his feline companion, Biff) is fascinating as he encounters more aspects of what’s left of  society: a robot-run manufacturing plant stuck in an endless cycle of creation and destruction, a pocket of humanity surviving over an isolated fallout shelter with a now twisted belief in Christian teachings. As bleak and despondent as much of this book is, I almost did not want it to end—yet it does come to a strong and somehow hopeful conclusion that perhaps mankind can find its way back still, if we only stop drugging ourselves and embrace learning, love, and pain.

Mockingbird is a work of literary science fiction which deserves to rank alongside works such as Aldous Huxley’s Brave New World, Ray Bradbury’s Fahrenheit 451, and Anthony Burgess’ A Clockwork Orange. If you have not read Mockingbird before, I highly recommend it to all, whether or not you generally consider yourself a science fiction reader. This work is one that transcends genre, and is a book I know I will return to read in the future when I wish to reflect on its powerful messages once again.