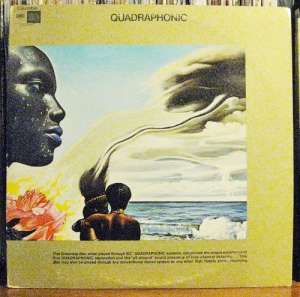 Miles Davis shocked the jazz world in 1970 when he sold his soul to the God of Rock n’ Roll, more precisely the grooves of Sly and the Family Stone. Miles threw away the acoustic instruments for electronic ones. Electric bass, Fender electric pianos, guitars, and organs to name a few.

The previous album In a Silent Way only hinted at the slab of experimental music that Brew was. In a Silent Way is more of a mood record, with soft lilting atmospheres, and an overall warm and inviting sound.

If Silent Way was the calm before the storm, then Bitches Brew was the category 5 hurricane devastating in how it ripped apart the jazz establishment, and set those myopic, yet talented critics like Stanley Crouch on their back sides.

Bitches Brew still sounds out there, wild and unapologetic, even 45 years later. I can certainly see why there was such a backlash, this was brand new music, with new instruments, really a new form of music and very avant-garde to ears that were still wondering what happened to Kind of Blue 10 years before.

After dozens upon dozens of spins, I’m amazed at the new things I hear, vinyl issues, CD and cassettes, but for me, the best experience I have had with Bitches Brew is the 4.0 stereo quadraphonic pressing.

I just use the Pro-Logic settings on my surround system and it sounds spectacular to me. All kinds of new sounds explode through the speakers, a much punchier bass, a slight echo at times on the trumpet that is much more pronounced than on normal mixes, plus Benny Maupin’s bass clarinet seems to cut through the mix in a more out in front sort of way.

If you are as nuts as I am about the electric music of Miles Davis, Then you must have this quad double album, Live Evil is the same way, especially the non live atmospheric tracks.

Bitches Brew is a timeless classic of jazz rock, and in my opinion the quadraphonic mix is the best way to hear all that was played in the studio. Admittedly I am not a quadraphonic expert, I have yet to hear any of my quad LP’s on authentic vintage equipment. Vintage equipment and decoders can be found, but some times at extreme prices.

I have a collection of 2,000 vinyl records, only about 50 are quad pressings, and from what I can gather, If you don’t have the decoder, you are not getting the full effect of the intended sound, but I do hear a clear difference the way I do it.

So I can only go by what I my own experiences are, some times, echo or reverb can be a problem, running through the pro-logic surround settings, and can lead to a less than desirable outcome, especially on some of the Santana albums I have heard.

May 10, 2011 was a red-letter day for me, I received in the mail the last Miles Davis vinyl record that had eluded me, a copy of the Columbia Records quadraphonic pressing of Live Evil.

I could have had it more than a few times before, but I just didn’t want to pay the hundred bucks for it, so  I was able to win an auction and only pay 51 dollars with shipping. 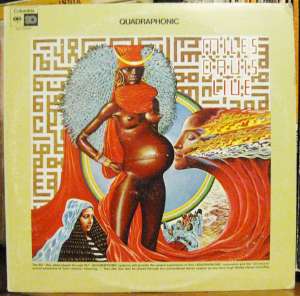 I did a cross comparison with the original issue of Live Evil, and there is a much more spacious sound field, and the bass seems to have a little more punch.

But what really stands out on the Quad pressing is the 4 atmospheric studio tracks, they sound completely different, “Sivad” and “Selim” have an enigmatic beauty anyway, but now a real clarity of instruments can be heard on the recordings.

Live Evil has always been my favorite live record from Miles Davis, recorded Live at the Cellar Door, With the magnificent Gary Bartz on Saxophone, I don’t believe he has ever sounded better on record.

The Chuggin Grooves laid down by the bass of Michael Henderson are pure “Sly and the Family Stone” the tunes just ooze an earthy street wise vibe, Miles is in top form throughout these live tracks, He bobs and weaves and jabs and stabs.

I don’t think Miles ever sounded better live than on Live Evil, or the Cellar Door Sessions, believe me, when they came out with that Cellar Door box, I was pre-ordered on that one, 4 extra discs of this music, was way to much to hope for, and all of it is stellar.

Even though John McLaughlin only appears on the Live Evil Tracks, and it is amazing that he wasn’t even a regular in this group, he should be commended that he melds so well on the Live Evil tracks.

Keith Jarrett also find a way to make the Electric Piano work for him, He sounds inspired and totally into the music, He would later talk negatively about this time period, and The electric piano in particular, But he can’t fool me, he is groovin up a storm on this music.

I will make mention about the Mati Klarwein cover art, The first time I saw it, I didn’t know what to make of it, my first inclination was, wow is that some beautifully ugly and bizarre artwork.

Over the years, checking out other work from Klarwein, Like Bitches Brew and Santana’s Abraxas I have grown to appreciate it more, but admittedly I sure wouldn’t hang a poster of a lot of it in my office.

Lastly, quadraphonic record collecting is a very small collecting niche, a small percentage of people even own a turntable, and maybe .001% of them own the original quad equipment. I do not have the equipment, but remember the Pro Logic setting on your surround system, It works fine for me.

All photos are my own.