Miles dips his toe in the electric water 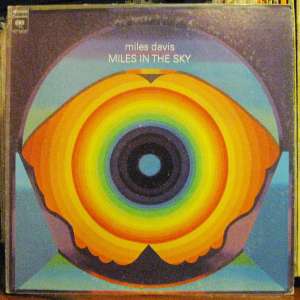 I have been listening to the music of Miles Davis right before his big push into rock territory. 1968’s Miles in the Sky is a transitional album if there ever was one. Electric piano, and electric guitar were first introduced by Miles on the album.

The music  is definitely a transitional style, it has a rock vibe, though it is still rooted in the classic Miles quintet sound, the classic quintet fans should be OK with the slight rock nuances.

On Miles in the Sky you can not only hear the beginnings of In a Silent Way, possibly Weather Report’s early beginnings too?

Miles’ playing is foreshadowing Bitches Brew with some of his phrasing, but no one could have anticipated Brew. Wayne Shorter is really sounding less and less like a Coltrane disciple, and he really wasn’t that much of Trane clone even with Art Blakey.

“Stuff” is the start of the new style

“Stuff” really is a genius track, Herbie Hancock’s Fender Rhodes and Ron Carter’s electric bass add that rock element, and Herbie has this light funky sound. Miles had a winning formula, but no way he could leave well enough alone, and thank god he didn’t.

Just for fun sometime, try to focus just on drummer Tony Williams, that guy could play some drums,  so much going on, he deserved his reputation. Funny how different “Stuff” and “paraphernalia” sound like a one shot deal. Miles was getting ready to move so fast, that even the rock critics couldn’t or care to keep up with him.

Had Miles just stayed right here and never ventured into the extreme rock realm, I believe the jazz establishment would have eat it up with a spoon, I am glad he didn’t.

Miles and Guitar: Lots of possibilities

You can certainly hear what’s coming down the road for Miles, In a Silent Way the album, is especially foreshadowed on Sky.  Miles was beginning to dig the possibilities of guitar in his music,  he was certainly looking for a rock edge, so other ideas were soon to follow.

George Benson probably wasn’t what Miles had in mind for a rock edge I’m sure,  on “Paraphernalia” he is just comping mostly, but the sound is a precursor to McLaughlin for sure. Benson does have a nice noodling guitar solo, but not much heat is generated at all.

Miles in the Sky gets lost in the shuffle because of the groundbreaking albums like Bitches Brew that followed, and albums the preceded it like Nefertiti.

Keep this in Mind: Miles in the Sky was released in September of 1968, Files de Kilimanjaro and In a Silent Way were released within the following 10 months! Astounding isn’t it, that Miles would create all 3 albums in a years time?

When you consider Bitches Brew was recorded in August of 1969  it simply boggles my mind the rapid fire changing and melding of rock elements to create an entirely original sounding jazz rock hybrid, that never sounds like an artist trying to sell records. maybe the higher-ups at Columbia thought other wise.

To go from Miles in the Sky to Bitches Brew in 18 months is simply astounding, I hear nothing in “Sky” that makes me think about Bitches Brew at all. What it must have been like to be alive then? I can understand why the acoustic jazz fans were pissed, of course Miles could have cared less about their feelings, he was moving on with out them.