We Want Miles From 1982, Shows trumpeter Miles Davis almost returning to his past form, in fact, listening to this live double vinyl twice in the last few days. I am struck at how the music really sounds a lot like where Agharta and Pangaea leave off in 1975. 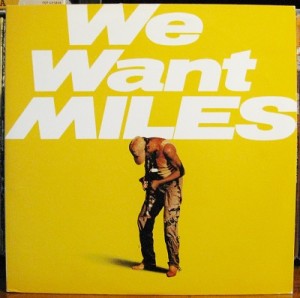 The sound is a bit more polished, and the rough edges aren’t there, maybe a little of the excitement is lost as well?

This is hard funk jazz with Miles really feeling his oats. In my opinion, We Want Miles is the best pure jammin’ Miles album from the 80’s.

Marcus Miller plays some mean funk Bass on this too, he has a crisp no-nonsense sound, you have some seriously good conga grooves being laid down by Minu Cinelu, especially on “Fast Track”.

Mike Stern plays some mean guitar as well, he has a nice clean sound that cuts through the mix.

I am struck at how clean this recording is, all instruments are clean and ringing through. We Want Miles is a product of its time, I hear some of that 80’s New Wave Synth sound mixed in here and there, that does kind of date the album, but it’s not over the top in any way.

“Jean-Pierre” gets a couple of readings on this double vinyl, both are the weak points on the album, sort of comes off as filler, though after repeated listening they do kind of grow on you, with the minimalist child like theme, and nice varied solos by all concerned. Saxophone Bill Evans doesn’t embarrass him self either on the album.

The 20 minute “My Man’s Gone Now” is the High Point of a stellar 80 minutes of music, But this ain’t 1958, and it sure as heck wasn’t arranged by that decade’s Gil Evans.

Miles plays it kind of straight the first few minutes in, the funk builds through out the track, and that raunchy blues funk swagger builds, then all of a sudden the return to 1958 and they play it straight, which is a treat to say the least.

Then it’s back to funk n’ blues with Miles trilling and hanging those call and response notes, giving plenty of space to breath. Miles stretches all over the map here, he still seems a little shaky at times, in some ways that fractured wounded tone is irresistible, and part of what Miles was, and as appealing to my ears here as 30 years prior.

I don’t think I would have any problem saying this album is worthy of being grouped in with the other essential electric albums, I can’t imagine how thrilled people were to hear this in 1982, after Miles had basically been gone for 7 years, and and damn near didn’t make it out of the 70’s alive.

Miles would play it safe the rest of the decade mostly, in the studio in particular, many a live document available though to show Miles still had some chops left.

We Want Miles and Aura I think are the best from the 80’s, with Star People a distant second, if you’re new to Miles, and this is where you start in the 80’s you may be disappointed at other albums. We Want Miles is Easily worth 5 stars in my book.

I have often thought the final decade of Miles Davis, after the epic 1976-1981 layoff gets the short end of the stick, certainly the albums released during the 80’s aren’t as heralded or groundbreaking as the 50’s and 60’s are. The 1980’s music is worth a lot more than I was lead to believe by the jazz critical establishment.

Miles’ 80’s work is misunderstood I think, I have always felt the music was a logical extension of the Dark Magus, Agharta, and Pangaea period of the mid 70’s.

To me the music really expands on that style but Miles Goes into the studio with it, and the 80’s technology smooths out the sound, definitely not as rough around the edges, and the edge is missed. you get a taste of that free for all spirit on The live 2 fer We Want Miles.

1983’s Star People is a bit different, there are a few funk ringers that continue the 70’s style, but Star People is all about the Blues, and I’m talking about the Prestige early 50’s era blues combined with a contemporary sensibility.

Miles really stretches out and lets the 18 minute title track breathe, with his fractured tone on trumpet, the track is a blues lesson to be learned, the old master Davis shows he has never quite left the blues, and more proof the 80’s are not as barren as many would have you believe.

A special treat on Star People is the twin guitar attack of John Scofield and Mike Stern, They have a nice opposites attract style, and they offer some nice blues solos on the title track, saxophonist Bill Evans doesn’t do a whole lot, apparently most of his work was left on the cutting room floor.

*Photos are my own of LP covers from my own collection.*