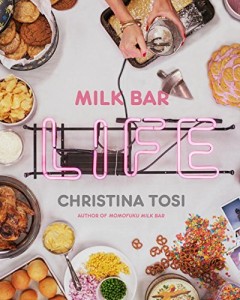 “Milk Bar Life: Recipes and Stories” is the upcoming cookbook by new MasterChef US judge Chrstina Tosi. Order it now at Amazon.

Back in November of last year, restauranteur Joe Bastianich announced that he would be leaving the MasterChef television series, with his last appearance being in the third season of MasterChef Junior (currently airing on FOX). Since then there has been plenty of speculation as to who would replace him on the show. I had my own thoughts on the matter, primarily hoping that the new judge would a) be a woman and/or b) a person of color, from a different ethnic background and with a different culinary point of view.

Well, I ended up being partially correct. Just a few weeks ago, FOX announced that the new judge for Season Six of MasterChef would be Christina Tosi. Tosi is a highly regarded pastry chef and owner of the Momofuku Milk Bar group of  shops in New York City.

Tosi’s background is certainly unique; she apparently studied electrical engineering at the University of Virginia for a year before traveling to Florence, Italy to investigate becoming a translator. Eventually she ended up enrolling in the French Culinary Institute‘s pastry program and worked in such esteemed New York restaurants as Bouley and wd-50, before coming on board as pastry chef for David Chang‘s Momofuku restaurant. She has published a well-reviewed cookbook in 2011, Momofuku Milk Bar, and has another due to be released in April of 2015. Tosi is also a teacher.

In a statement after her announced addition to the MasterChef judging panel, she said she was “excited” to join the show as she has long been a fan. If you’re unfamiliar with her and her cooking skills, here’s a video of Tosi demonstrating how to make a “Crack Pie”, one of her popular sweets at Milk Bar:

I am very pleased that a woman has been added to the judging panel of MasterChef, something I feel is long overdue. Despite the fact that four out of five seasons so far have ended with a woman winning, the show could often feel sexist in the way contestants were portrayed, filmed and even judged by Gordon, Graham and Joe. MasterChef has faced allegations of sexual harassment toward female contestants in the past, particularly after one dismissed competitor, blogger Marie Porter, made accusations in 2013 regarding what she observed during her time during the Season Four filming in how some female contestants were treated.

Additionally, in Season Five, it seemed as though we couldn’t get through a single episode without at least one gratuitous lingering camera shot on “areal dancer” Courtney Lapresi’s high heel shoes and dancer’s legs. The entire season was largely marred (in this viewer’s opinion, at least) by what seemed to be obvious favoritism by the judges toward Courtney, and the “cat-fight” rivalry emphasized in the season between her and eventual runner-up Elizabeth Cauvel.

With a female judge on the panel, I hope there will be some better balance in how judgements are made on the contestant’s dishes and with a woman’s palette represented. Perhaps some of the obvious sexist overtones will be toned down and we’ll see less blatant favoritism towards attractive female contestants. Of course, some say that Christina is “too nice” to fill in the “mean judge” role played by Joe on the show, but we’ll have to wait and see how that plays out. I don’t think excessive nastiness is a necessary part of the MasterChef “recipe” and indeed can make the U.S. version of the show less pleasant to watch than, say, the Australian or British editions.

It is still disappointing to me that we don’t have a judge on the show with a different culinary background, however; I’ve often had the feeling that the judges have looked less favorably on certain ethnic cuisines, such as Caribbean or Asian (though admittedly Christine Ha in Season Three received a lot of praised and attention for her Vietnamese dishes.) One of the reasons I like The Taste is the contrast in culinary preferences and styles by the judges there, varying from Ludo Lefebvre and his French training to Marcus Samuelsson, with his passion for global cuisine and his Scandanavian/Ethiopian heritage. 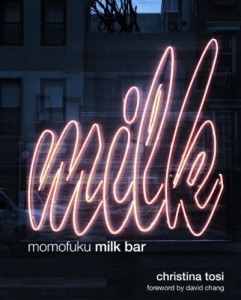 I’m also undecided over the fact that Tosi is a pastry chef instead of one focused on more savory dishes. I’ve been annoyed in the past on MasterChef by how many elimination tests involved preparing complex sweets and desserts, often a very different skill set for chefs than preparing savory meals and foods. So on one hand, perhaps Tosi will be better suited toward providing mentoring to the home cooks in any desserts involving pastries, sweets and baked goods. And she may be a better judge of technique and flavor for such dishes. But I do hope it doesn’t mean we’ll see even more of an emphasis on sweet stuff on the show; this is MasterChef, after all, not MasterBaker…and there are enough other competitions on Food Network and elsewhere solely about sweets, cupcakes, desserts, etc. (Can you tell I’m not much of a sweet tooth myself?)

Overall, though, I’m excited about this change and think it will be interesting to see how the replacement of Bastianich with Tosi will affect the tone and style of MasterChef in Season 6—which is currently filming and set to begin airing in the summer of 2015.

But what do you think? Are you excited about the change in the judging panel, or do you wish Joe was sticking around? Would you have preferred to see Gordon or Graham retire from the show? Feel free to leave a comment below in the guest book with your feelings.