“You’re The Apple of My Eye” 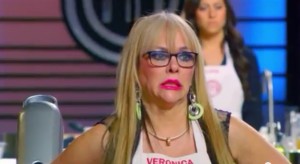 Screencap from the MasterChef Season 6 episode “You’re The Apple of My Eye”. Episodes available for download via Amazon Instant Video.

Last week on MasterChef, we (briefly) met the top 40 contestants for this season, which was then whittled down to 20 in a series of head to head battles, plus a final cook-off for 6 chefs who got a second chance to earn a white apron. So we ended up with 22 “home cooks” who would be competing in the kitchen officially—and now it’s time for the first Mystery Box challenge for all of them.

Everyone is quite excited for the opportunity to be there. We hear briefly from Charlie, an A/C tech from New Orleans, who says just two weeks ago he was working on a roof! They get to their stations and are told that they will have to take whatever is under their boxes to make something excellent. Whoever has the best box gets “the biggest advantage ever”. Guess we’ll see about that…

As they lift their boxes, they discover it’s something different inside for each of them: their own individual kitchens. It’s a selection of ingredients they “left behind” in their home kitchens. Veronica, who we didn’t really meet at all last week, seems quite confused. The judges don’t want any old dish, Christina tells them. It has to be the best dish of their lives…and they have one hour to cook it.

It’s quite a variety of different meals being prepared as the judges remark on there being 13 different states represented by the 22 home cooks.  Amanda says it’s very different from being at home, and Christina is “so excited” to see what they all come up with. Charles is making a spicy cajun dish. Hetal is making a coconut curry soup—no protein, the judges note, which could be a disadvantage? Derrick is doing a dish with roasted brussels sprouts. Dan is doing a savory Pate a Choux which could be great or really off the mark.

Katrina is “in the zone”, making pork tenderloin schnitzel. Gordon says it’s delicious when he takes a quick sample. And he likes how she’s cooking her cabbage.

Who is looking to have the top three dishes, for those are the only ones the judges will taste? They are definitely excited about Katrina and Dan’s plates. Time is called and they announced that the first person in the top three is someone who stuck to their roots and it’s a clever interpretation of a dish: Katrina.  She comes forward with her pork schnitzel, served with braised red cabbage and “Christmas peas”. Gordon says she’s got finesse, although the pork could have been cooked slightly less. Even so, he feels like “father Christmas jumped down the chimney”. Christina loves the cabbage but thinks the schnitzel needed more color and breading. Graham loves it, says it’s like going back in time.

The next dish is definitely the home cook on a plate, they say. It’s perfectly seasoned…it’s Dan’s. He has made savory eclairs with creamy mushroom filling and two sauces. Christina says it’s perfectly right and she’s impressed. He took a risk and it really worked. It’s gallant, strong and thoughtful, although there’s maybe too much cream for Gordon.

The last chef in the top three showed really creative thinking and a lot of guts: Hetal. She’s made coconut curry soup with a cilantro mint basil oil. Holy (bleep) that’s so good, Graham says. She’s batting a thousand. She could have maybe beefed it up with some lentils but it’s good show otherwise.  Gordon is impressed that she could make something so flavorsome with so little ingredients.

Three incredible dishes, they say, but there can only be one winner. The best mystery box dish? Congratulations go to Dan. He feels that right now he’s riding high, but he has to work his butt off to keep them behind.

And so he gets to go back in the pantry to find out his reward. First off, he won’t have to cook in the elimination round himself, so he is safe. In front of him is an array of desserts, each and every one of them created by Christina. Although there’s a lot of complexity there before him, Christina wants every one to make one basic thing: apple pie, the true american classic. When you get it right it’s delicious.

He gets another advantage in that he can fill a big bag of apples before heading back out of filling a bag full of apples. We’ll find out why in a moment. When the challenge is announced to the others, some definitely aren’t thrilled; Mateo thinks baking is definitely a weakness for him (bad sign for going far in this competition!)

Turns out that Dan gets to give out apples to the other chefs as he wishes, representing “salvation” for those selected. If you don’t get an apple, you have to cook.

The decision making is almost political, Dan says. Nine of the twenty-one besides Dan receive apples. The nine who will be baking have to avoid elimination, and two of them will be going home. They only have 90 minutes to make their pies, so they all head into the pantry to pick their ingredients.

The nine who will be cooking are Derrick, Veronica, Charlie, Olivia, Stephen, Mateo, Brianna, Christopher and Sara.

Everyone gets busy baking very quickly. Derrick is doing a simple apple pie with bourbon whipped cream.  Stephen wants his taste to be amazing. If the judges don’t like it they have to check their medication, he says. Veronica is using graham crackers in her crust. Olivia isn’t sure if she’s doing a crust, which has the judges concerned. Christina wanted apple pie, so perhaps she’d better rethink her plan…

Mateo, the teacher we’ve seen very little of so far, is doing apple pie with ginger, cardamon, nutmeg and cinnamon in his filling. But will those flavors get too concentrated?

Who looks good and who is going home, the judges wonder? No one’s pie looks the same. Time is called and now everyone’s pie is going to be up for scrutiny.

The judges start with Veronica. She has a “flying saucer of clumpiness” for her pie, but she knows the flavors are there. It’s an apple pie. A very simple apple pie, she says. But it does not looks like one. She says to the judges that she doesn’t cook apple pie a lot. The real bizarre thing is it apparently it tastes delicious even as it looks a mess. “DAMN,” Gordon says. Christina says it’s delicious, it’s about basic techniques. Graham says he likes the cook on the apples…he would take another slice.

Christopher is next. He has never made an apple pie before. He has made an apple pie with maple syrup and bourbon filling. He used 5 tablespoons of cornstarch, which the judges think could definitely be too much. “Just eat it,” Christopher insists. Gordon wants to know about his defensiveness, but the proof is in the food. “It’s delicious!” Gordon says. “Amazing.”

Next up is Olivia. On a scale of 1 to hate this pie, she hates this pie. She’s not proud of it. She has made an apple pie with goat cheese that’s been flavored with lemons. Graham says the goat cheese does not belong. It’s a huge miss. Christina says another cheese could have been good, but not goat cheese.

Next up is Derrick. He has made his apple pie with orange zest and brown sugar. Delicious and fragrant, the judges say. But the thing he’s missing is more apples.

Stephen has made his with mascarpone and caramel. Christina loves the balance of flavor. The problem is it’s not baked long enough.

Charlie is next with his “grandma” apple pie. Graham says it’s rustic with a lot of charm. The technique isn’t there, however.

Mateo has made a ginger apple pie with salted bourbon caramel glaze. The problem is it’s just disintegrating because the apple is too thick and the pastry is too thin. The content is not there. Christina says the spice is little too much.

Next up is Sara, and she’s got a BIG pie. It’s a caramel pecan apple pie that tastes like a “slice of autumn,” Graham says, it’s delicious.

Brianna is last up with her ginger and mint apple pie. Christina commends her on the lattice work, however it’s very watery. It’s literally apple soup. The apples are lacking real depth of flavor.

So, these nine have had their first taste of an elimination test. Who baked with confidence? Christopher is declared the victor; he is the “pie king” for the day.

The bad news? The three worst pies of the night belonged to Brianna, Mateo, and Olivia. Two of those three will be going home.

Overall? This episode was okay for an early competition. There are still too many people in the kitchen to really get a clear sense of who is who, although it is easy to get a feeling for those with a strong chance to go far and who may be quickly eliminated in the next few episodes. And it’s hard to care that much about these early eliminations when we’ve barely met and seen these people on screen.

This isn’t the first time we’ve had an apple pie elimination test, either—I certainly remember the one from season three where eventual season winner Christine Ha wowed the judges with her “humble” apple pie. I hope future elimination tests will be a bit more interesting and original and not just rehashes of baking “basics”.

Want to share your thoughts on this season of MasterChef and learn more about the competitors? Then check out my MasterChef Season 6 fan page on Wizzley!

MasterChef is back for its sixth season in 2015. Are you ready for another round in this competition of talented home chefs?