There are 16 home cooks left in the MasterChef kitchen. Now it’s Mystery Box time once again, and Ahran wants to win two in a row to show that she is a real front runner.

Tyler wants to find something unique in the mystery box: rabbit or maybe squirrel? Christine wants bone marrow. What when they lift up their boxes, what do they find? Cans! Cans and cans and cans. But the cans are not labelled.

Willie says everything people cook where he comes from comes from a can. Ahran is worried; she doesn’t cook with cans at home. Elizabeth calls it a doomsday prepper’s dream come true. They all have an identical selection of 52 cans and a basic staple pantry with milk, eggs and flour—and 60 minutes to turn their cans into a stunning dish.

Everyone is opening their cans to try to figure out what they have. It looks like there are chickpeas, baby corn, beet, fruit salad, and olives, just to name a few. The key is to use the staple pantry, Joe says. He would use the canned spinach with garlic and make a pasta dish. Willie is doing Eggs Benedict. Elizabeth is making a creamy beet and potato soup, like a borscht. She thinks she actually has an advantage for this one as she grew up eating and cooking with a lot of canned food. Ahran is using the canned fruit only and the staple box ingredients to make a cake. Jaimee is stumped.

Francis L is experimenting and making a Thai inspired seafood soup, using the broth from the seafood cans. Victoria is making a potted meat fritter. Jaimee is going to make a soup as that’s all she can think of. Now it’s the last minute for finishing plating, and it’s time to see who will stand out.

Victoria and Francis L are hopeful they’ll make the top three. But the first that stood out was “elevated” and “hard to believe the ingredients came from a can”…for the first time in the top three…it’s Elizabeth, with her borscht with peas and ham. It’s not a very traditional borscht (to this viewer of Polish heritage, at least). It looks great and Gordon would have a hard time believing that it came out of a tin. Graham likes the heat and the saltiness of the ham. Great job, he says. Joe loves the richness and that she added the croutons of processed meat and chickpeas.

The second dish had a heat component to it that they were intrigued by…another first time in the top three: Victoria. She has made a potted meat fritter with artichoke and beet salad. There are eight cans on the plate and five meats. Graham says it’s really good, sweet, spicy, earthy and a great use of the ingredients. The fritters could be a little smaller. It’s very “gastro-pubby”, Gordon says, and it delivers a punch of flavor.  The spicy catchup she’s made lifts everything up.

The third dish in the top threee made a very smart use of the staple pantry box. That chef did not open all of their cans: Ahran. She’s made a rolled sponge cake with fruit and whipped cream. It’s the smartest dish, Joe says, as no one else made a dessert or only used one can. It’s brilliant. Gordon might add a bit more color, but right now she has the “biggest set of balls in the competition.”

So, who is the winner? Victoria believes she thought outside of the box and deserves it. Elizabeth feels it’s crucial she wins. The person who cooked the best dish and will get a huge advantage is announced to be Elizabeth. She is ready to find out her advantage.

She follows the judges to the MasterChef pantry, where she finds out that the theme of the elimination won’t be told to her by the judges. She will learn it from a special guest, someone who has stood where she is standing—it’s last season’s winner Luca! But wait, there are two MasterChef winners in the pantry today; also joining Luca is Alexander from MasterChef Junior.

They each have brought with them a signature MasterChef dish of their creation. Elizabeth’s first advantage is she does not have to cook and is safe. Her second advantage? She can pick which of her other contestants have to cook which of these winners’ dishes. 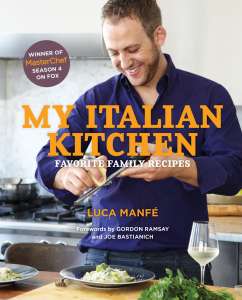 Want to make Luca’s pancetta-wrapped veal? The recipe is in his cookbook, My Italian Kitchen. You can read my detailed review of the book to learn more about what other recipes you’ll find there.

We do not see what these dishes are until Elizabeth returns to the kitchen along with the guests and the judges. Luca has a savory dish, one that is featured in his cookbook My Italian Kitchen: Pancetta-wrapped veal cutlet with radicchio. Willie thinks it loos very restaurant quality and it’s intimidating. Alexander has a passion fruit panna cotta with berry coulis and hazelnuts.

Some will make Luca’s savory dish and some Alexander’s sweet. Elizabeth gave Alexander’s dish to Cutter (“Death by dessert!” he says), Christian, Jaimee, Christine, Ahran, Francis B, Victoria, and Tyler. The rest will have Luca’s veal dish. Everyone now gets to taste the MasterChefs’ dishes to get a sense of what they need to reproduce. Alexander’s panna cotta is so good, Jaimee says, and she’s feeling confident. Luca’s dish is perfectly balanced, Courtney says, congratulating herself on her palate and feeling sure that she’s going to “kick ass”.

Time starts and Willie is going by what he tasted on Luca’s dish…he doesn’t know what radicchio is and seems lost in the pantry. Luca’s dish is tough because it’s not just cooking but butchering, the judges observe. Alexander’s dish takes time to set and you can’t rush it.

Courtney thinks she was picked to cook Luca’s complex dish because she’s a threat. Christian isn’t great with desserts so he’s not happy to be doing the panna cotta. Big Willie is cooking the veal first before wrapping it in the pancetta and that may be a big mistake, the judges think. Luca would not have done that, but as Luca observes from the balcony he says Willie maybe is inventing a new dish.

Alexander thinks Jaimee is doing things really well and that Tyler looks pretty good. Cutter is making “Panic Cutter” and has never even eaten a panna cotta before. But things could be going wrong for Jaimee; she made three panna cotta to place in the chiller and when she goes to retrieve them, only two are on her tray. Did someone take one of hers? Is someone trying to sabotage her? Her first one just puddles when she tries to plate it. So does the second. She wishes she had her third!

Time is called. Alexander and Luca come up to join the judges and to wish the home cooks luck.

Now it’s time for tasting. Courtney (and her glittery high heels) is first. She is proud of her dish. Sauce…nailed, Gordon says. The dish looks beautiful. There’s a slight over-char on the sprouts but the veal is nailed. We get a shot of her high heels before we viewers even see her plate. Delicious, Graham says. She’s never cooked veal before, she tells Joe. It’s a good job.

Big Willie is next. The issue may be how his veal is cooked. The sauce is nice and the radicchio is good, but the veal is dry—as they feared would be the case because he twice cooked it. Does he have one foot out the door? It will depend on how the others have done.

Christian is shown next, and he disappointed in his panna cotta. Graham says it’s like a cheesecake; way to much gelatin. Cutter is next. Why did he get the panna cotta? Because he has big old bear hands, he says. The panna cotta is actually quite good. It’s right. Elizabeth targeted him and it was a miss. Good job, the judges tell him.

Jaimee is next. It’s a smush, she calls it. It’s the first time in six years her panna cotta didn’t set. It’s like a really good pudding…the flavor is great, the judges tell her. But she is downright embarrassed by how it turned out. 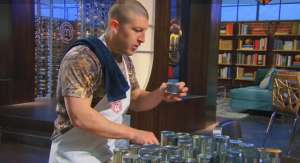 Last up? Is Tyler. Before he even gets far in describing his dish, however, Gordon stops him and says that for the very first time in MasterChef kitchen history, someone has brought them a dish that he did not cook. Ramsay walks to the back and brings back a bunch of ramekins. Tyler says he put four ramekins in the blast chiller—but it seems he made a mistake in grabbing one to plate. He took one of Jaimee’s instead of his own.

Gordon believes Tyler when he says that he didn’t know he had done that; he had just panicked. How will the judges rule in a case like this? It’s a first for them, so they don’t quite know what to do.

Gordon has to judge based on what they put on a plate…but for the first time ever they’ve had a dish put on a plate that was not cooked by a contestant. And as it turns out, Tyler is going to go home for this mistake.

It’s devastating, Tyler says, but it’s the rules and he understands why the judges had to do what they did. He leaves certainly upset but without making a scene. I’m going to be sad to see him go over what was simply a error of grabbing the wrong plate instead of a technical error of cooking. To me, as a viewer, it didn’t seem particularly fair when there were some real clear disasters plated by the other chefs. Maybe it should have been a double-elimination, if need be? Seems like this was just an easy way to eliminate a chef the judges knew they weren’t going to carry along further in the competition.

To end the episode, the judges announce who had the best re-creation of a MasterChef signature dish: “Little Miss Tippy Toes”, Courtney. (Ugh, gag me with a spoon—or stab me with one of her stiletto heels!) I’m getting so tired of Courtney’s smug arrogance and the way the judges swoon over her. Am I just being unfair? It’s hard to tell if the editors are trying to make us viewers hate her or cheer for her, but I’m definitely falling into the former category. What about you?