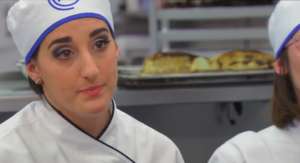 Screencapture from the September 1 episode of MasterChef on FOX. Watch it now at Amazon Instant Video.

The final six contestants for this season’s MasterChef are brought to location on the Sunset Strip, to the (supposedly) legendary Sunset Marquis Hotel. Leslie feels like rock and roll royalty as this is supposedly where all the rock stars stay. They are led into the kitchen of the hotel’s restaurant, Cavatina

Why are they there? Because it’s time for the dreaded restaurant takeover! The six chefs have to take over in the kitchen. Gordon and Graham are the only judges on hand this week, and Leslie and Jaimee will be team captains since they were the winners last time with the dim sum pressure test. Jaimee has been on the winning side of more team challenges, so she gets first pick. She doesn’t want to be team leader, so she picks Christian first for her team. Leslie then picks someone with pizazz who has outdone everyone: Elizabeth. Jaimee then gets the final selection, and picks someone with incredible finesse: Christian. Cutter is the last pick by default for Leslie, and he’s worried Cutter won’t be able to shut up and take orders from him.

They will be serving over 50 guests that evening but ultimately Gordon and Graham will be choosing the winning team. They meet the head chef of the restaurant who will be demoing the dishes. They must prepare Prince Edward Island mussels and a gnocchi dish for their appetizers, then sea bass and New York strip steak for their entrees.

They start with the mussels, then get the gnocchi shown to them although it’s only a few minutes each to explain the dishes. The bass is served with quinoa, and the NY strip steak is prepared with butter, seared, and served with asparagus, potatoes and a mustard seed chimichurri. They have one hour to prep and two hours to serve the diners. To get through it, they will have someone expediting: Gordon, of course (so he can yell and swear at them like it’s Hell’s Kitchen).

Leslie, heading the Red Team, wants to take care of the mussels and the steaks, and have Elizabeth on plating. Cutter is arguing already with Leslie over who is doing what. He just wants to get the job done.  Jaimee says she is scared as she appoints Courtney and Christian to different jobs for her team (Blue).

Jaimee is struggling to find her voice as leader, not answering questions from her team members. Gordon has to give her a pep talk to try to get her to speak up and get it together. Leslie is watching everything and Cutter says he’s too egotistical, nothing but a “house bitch”! They get into a big argument with Cutter refusing to look at Leslie while they’re talking, which gets on Leslie’s nerves big time.

The “VIP guests” are piling in to the restaurant while all of this is going on. Gordon has to calm Cutter down, and he wants them to shake hands. Cutter thinks Leslie is a loser but he just wants to get through it.

Service time. The tickets are coming in and Leslie has never done this before. Or so he says. Wait a minute, didn’t they all have to work in a diner kitchen earlier this season?!

Courtney is doing the gnocchi which she won her apron for so she is going to do it perfectly, she says. The Red Team is adapting to the pace and getting orders out, but Blue Team is struggling. Courtney’s gnocchu looks like glue…no, worse. Jaimee is freaking out and Courtney takes over as team captain because Jaimee just wants to cook, she can’t handle running the team.

Cutter and Leslie are now working well together with their apps coming out. But blue team is struggling to even complete their first appetizer order. Courtney says it’s the hardest thing she’s ever had to make. She can’t make the gnocchi without them turning into mush. Christian now takes over as team captain as Courtney gives up! “Welcome to my world!” Christian says, and once he takes over he says everything is starting to flow.

The Red Team is getting the final orders of their appetizers out. In the dining room the feedback from the diners is that their gnocchi is flavorful and the mussels are nice and spicy. Blue Team is getting their last orders out and the feedback is coming in for them as well. The mussels have awesome broth, and the gnocchi has enjoyable flavor so the diners are impressed after a long wait.

Entree service begins. Christian wants Blue Team to finish strong, and meanwhile Leslie and Cutter are starting to battle again. Elizabeth says she has never seen Ramsay so angry as he has to intervene. Gordon has to pull them both out onto the restaurant floor to show the waiting diners and tell them he will cook every plate for these people himself, if they can’t stop arguing.

The Red Team is trying to put personality differences aside and the Blue Team is doing well with Christian in charge. They are racing to get their final order out. But the Red Team is swiftly completing orders too and Elizabeth says they are finally working together well. Courtney says they finished well under Christian’s command but she feels like she’s been hit by a car. Leslie says it’s one of the hardest things he’s ever done.

The Red Team’s customers say the steak could have been a little warmer but liked the veggies served with the sea bass. The Blue Team is getting good feedback on their sea bass but that their steak was poorly seasoned. So both teams get mixed reviews.

It’s time for the verdict from the judges. It’s too close for them to call that evening so the verdict will come in the MC kitchen when they return. Christian thinks the Blue Team will come out on top because they didn’t fight, but Leslie thinks Red Team will win because their plates came together better. Who will be right?

While they await the verdict, Elizabeth says knows she is not cut out for a restaurant kitchen but she wants to write cookbooks anyway, that is her dream and not the restaurant business. Christian, in contrast, does want his own restaurant and he’s doing all of this for his son. But which team will be on top? The judges have decided that the winners are the Red Team. That means Leslie has finally been on a winning team! Leslie, Cutter and Elizabeth are all safe and they will definitely be in the top five. So, someone on the Blue Team will be going home: Jaimee, Courtney or Christian. All three have to cook and at least one person will be going home.

What do they have to cook? It’s a “tall order”. It’s a cream puff turned into a croquembouche – a tower of cream puffs bound by threads of caramel. Jaimee and Courtney are certain they can pull it off, and Christian isn’t sure. Courtney thinks there’s no way he can do it (which, of course, means that he will! Do these editors think we haven’t figured out this routine yet?) They have ninety minutes to make their towering dessert. Jaimee has made croquembouche before so she thnks she can pull it off.

The technique is very involved. Jaimee is feeling confident She’s made five before, she thinks, and that Christian is vulnerable. Courtney’s pastry puffs are a little inconsistent in size. She is feeling the pressure. Twenty minutes to go and they have to start making the caramel. Jaimee is starting to build her tower layers first, and Christian is behind. He’s waiting for his sugar to brown.

Eight minutes are left and every profiterole has to fit perfectly. Chrisitan’s is starting to collapse he has to use tongs to pull one out from the center. They have 30 seconds left and then time is up!

Christian is next. He’s not feeling good, Visually, there is different colored caramel, some different shapes so it looks like it’s been “slammed against the wall”, Gordon says. The caramel sounds nice when the puff pastry is broken into, but there’s hardly any cream inside. However, the cook on the profiteroles is nailed. Graham pulls one off but it’s pulled off pieces of three the profiteroles at the same time. The taste is great but they are glued together, so there are definite technical flaws.

Jaimee is last with her croquembouche and the shape and looks good, Leslie says from the balcony, and he thinks she’s safe. But she’s added no finishing sugar to her dessert. There’s heavy, sticky caramel between the upper pieces. Gordon asks her to take one off and she has to use a knife … and even then she can’t without getting large chunks pulled off of the others.

They are wet, Gordon says, because of their undercook. It tastes nowhere near as good as it looks (and I didn’t even think it looked good to begin with!) The pastry cream is kind of bland. Structurally it’s the most even but the flavor is not as explosive as he was expecting.

One person is going home. One stood out, most importantly for the taste , and that was Courtney’s croquembouche. She is safe that means either Christian or Jaimee is going home. It was a tall order but they can only judge on what they put forward. The person leaving MasterChef tonight is Jaimee. Christian is safe. They thought she would be the one who was safe but her experience didn’t shine through with her dessert tower. Hers may have looked beautiful but it was impractical to break down.

Jaimee is incredibly emotional at this point, crying and looking seriously upset. Gordon tries to give her a pep talk about how his kitchens in New York are always open. Really? Look what happened with Kathy Prieto last season, and her so-called “internship” in one of Gordon’s NY restaurants!) I think it was definitely past time for Jaimee to go home. For a pastry chef she had come up short on several baking challenges now and simply could not function well in a high pressure, teamwork-oriented challenge.

Hopefully next week we’ll be seeing the last of Cutter, because it’s definitely time for him to leave as well. The top four definitely deserve to be Leslie, Christian, Courtney and Elizabeth at this point…the only question to me remains who will go up against whom in the finale.

CHECK PRICEAlan Silverwood Profiterole Party Croquembouche Set Recipe Included
Want to try making your own croquembouche at home? I’d never even heard of one until watching this episode of MasterChef. This kit includes a flexible non-stick liner, an anodised base, a small anodised top cone for shaping the dessert and of course, a recipe for making the different components of the croquembouche.