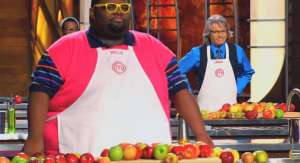 Screencap from the August 26, 2014 episode of MasterChef. Watch it now at Amazon Instant Video.

It looks like it’s going to be a crazy week on MasterChef this episode just from the opening preview. Courtney says the kitchen feels bigger since there are fewer people…good thing given that poofy skirt she’s wearing that looks like it’s straight out of a ’50s sock hop.

With home on their minds and in their hearts, they are ready for their mystery box challenge. And it’s apples. Lots and lots of apples of different kinds come pouring out of their boxes. Elizabeth is thinking of apple pie, Christian is thinking a crisp or tart, and Willie is thinking of a cookie. They have a limited pantry to work with…and here’s the twist: they cannot do a dessert! What will they come up with in 60 minutes?

Willie doesn’t know what to do since he is mostly a dessert chef and can’t seem to put the apples together with a savory dish. Courtney is doing a glaringly obvious product placement for the Phillips Airfryer – but I don’t know what she’s going to make in it.

Willie ends up deciding on pork tenderloin with stuffing-stuffed mushrooms. Cutter is doing wild rice and apple-stuffed squab with sugared apple crisps…also in the fryer. Seems like nearly everyone has one on their station they’re supposed to be incorporating into their recipe in some way.

Christian and Leslie are going back and forth with the snark. Christian got a letter from his fiance and the judges want to know what she misses more: him or his cooking. He’s making stuffed pork chops and Graham says it looks legit. What else looks really good to the judges? Leslie is in the zone, but Elizabeth’s dish sounds more like an appetizer, not an entree. Courtney’s could be good as well. Time counts down and hands are in the air.

The judges take a final look around and pick the top three dishes. This first plate looked beautiful and smartly used the pork and the apples: Christian’s. Courtney thinks his plate looks like a big piece of meat and that it may not be cooked all the way through. Visually it looks stunning and Gordon wants to know if he’s confident….and he’s nailed it. The pork is delicious, well done. Graham says it looks like a restaurant dish and he’s excited to see what else Christian can bring. Joe says it’s perfectly cooked and that’s not easy to do with a double-cut stuffed chop.

The second dish incorporated the pork in a smart way: Leslie’s. He’s made a stuffed pork tenderloin wrapped in bacon with apple mashed potatoes. Graham says it’s perfectly seasoned and well-balanced. It shows a lot of technique and his journey. Gordon says it’s well done.

Last up for tasting? This dish had bold flavors and a lot of technique: Courtney’s. Elizabeth is not happy. She has served her pork loin with apple and celeriac salad. Joe says it’s a smart dish because she used both the sweetness and the acidity of the apple.

Three amazing dishes but only one can be the winner. The person going into the pantry to get a huge advantage in the elimination challenge is…Courtney. She’s smug and happy. Elizabeth looks ready to kill.

Things are going to work differently this time around, she’s told. She won’t choose what everyone will be cooking: they will be making dim sum. It’s something that families love, Graham says. They have shrimp dumplings, shumai, steamed pork buns, cabbage rolls and pot stickers.

Her first advantage is she does not have to cook. The remaining six chefs have to replicate all of the dim sum dishes while working in pairs…and Courtney is picking the teams.

Elizabeth is nervous because she’s sure Courtney will be targeting her. Willie wants to be on Christian’s team and thinks they can work well together. Christian is a very fast paced and efficient chef, Courtney says, so she’s partnering him with Willie. Willie’s excited, Christian is “good”. Cutter is next and she knows that Cutter isn’t good at intricacy so she’s pairing him with Elizabeth. Elizabeth tries to make like she’s happy with that pairing just to keep Courtney from thinking that she’s gotten her into trouble. That leaves Leslie and Jaimee to be paired together by default.

But there’s one more twist. They are working as a team but it’s the dreaded tag team challenge. Only one person cooks at a time on each team, and whenever time is called they have to switch off and pick up exactly where the other chef left off. They get a chance to taste the dim sum dishes first. Cutter’s never made it before but he did spend some time in Hong Kong, so he thinks he’s familiar enough with the flavors. Leslie says it’s a lot easier to get dim sum from the Chinese restaurant than to make it at home.

At least one person is going home…maybe an entire team. They have only 60 minutes to get cooking. And time starts with a frenzy of activity.

Get the short ribs on first, and blanch the cabbage, the judges say. The pot stickers need to cook twice, the shumai only need a short time, so a lot of it comes down to timing things right. Leslie is the first to get cooking on his team, Jaimee and Leslie don’t seem to be communicating. Jaimee is totally stressing out. They switch off and Jaimee and Leslie continue arguing, looking like a total mess.

A second switch off is called and Cutter and Elizabeth seem to be working well together. Leslie doesn’t want Jaimee to talk to him while he’s trying to cook.  Willie seems lost while Christian is shouting out directions, and he doesn’t like to be yelled at.

Will Jaimee and Leslie even get anything on the plate? There’s one switch left and Jaimee doesn’t think they will get their buns done. Two minutes left and Christian nearly wipes out. Elizabeth does wipe out with a nasty-sounding fall, but she’s okay.

Time is finally called and Leslie and Jaimee are first up for tasting. Gordon wants to know what went wrong between them in the kitchen, especially as it looks really good. The short ribs are shredded beautifully in their buns and delicious. The pot stickers taste quite nice. The tray could have been near perfect if they’d focused on each other. Joe says the cabbage is a good job. The dim sum is harmonious which is surprising given all the animosity between them.

Christian and Willie are next and it doesn’t look like there’s a lot of finesse to their dishes. The dough is too thick, there’s no sauce or garnish on their pork buns, it’s just sad. The cabbage rolls need seasoning. The flavor profile that Willie was known for is nowhere to be seen tonight.

Elizabeth and Cutter are last and she thinks it’s the worst thing she’s put in front of the judges. It looks horrendous. The buns look like a basket full of canned dog food. Everything’s oversized, but no filling in the pot stickers, which show a lack of seasoning. The pork and cabbage rolls have too much filling. How can a pairing that was great with communication produce something so bad? Joe says it’s disappointing and he doesn’t even want to eat the pork buns. Courtney is preening while Elizabeth is aware she’s totally vulnerable.

The team that put together the best tray of dim sum was Leslie and Jaimee, despite their differences. Elizabeth and Cutter looked like they were owning the challenge but the final results were underwhelming. Christian and Willie were screwed up by being put together, but the team safe by a fraction of a hair is Cutter and Elizabeth.

Willie and Christian both contributed to the loss of their team and at least one is leaving the kitchen shortly. It’s a tough decision, but the person leaving MasterChef is Willie. Tonight Gordon didn’t taste the love tonight which is why he’s going home.

Before he leaves, Willie is asked who he thinks will win and he says it’s the person he’s been predicting to win it from the start: Christian is going to take home the win. I think he’s likely got it right – or at least I hope he does because I certainly don’t want it to be Courtney!

I am pretty certain Jaimee and Cutter will be the next ones to go. Jaimee just has been showing too much weakness of late in the kitchen; the only time we’ve seen her really success is in baked dishes and making the stuffed pasta dish some time ago. Cutter just barely keeps dodging the bullet but he lacks finesse too often. Elizabeth, Christian, Leslie and Courtney are clearly the top competitors left and to me it’s just a question of who will be in the finale going head to head. I’d enjoy seeing a Christian versus Leslie battle myself!